For me, food is more than just the actual dish, although the flavor is very important. It is conversation, relationship and friendship. It is an expression of love from the person who prepares the food and an expression of togetherness for all who partake. It is a social connection that is formed around the table in which all participants are included and invited to share in life-giving sustenance.

While in Cochabamba, I have had the opportunity to enjoy many meals with my host mother, Anita. She is an excellent cook and always makes healthy and delicious meals. From time to time, Anita brings in traditional food or we go out for something special. I've been out to a couple of meals with others too. And with each meal, there is a growing sense of comfort as well as the bond of getting to know each other.

Here are a few of the unique foods and drinks I have enjoyed in my time here. I've included some links you can click on to learn more and even see videos about the food and Cochabamba. 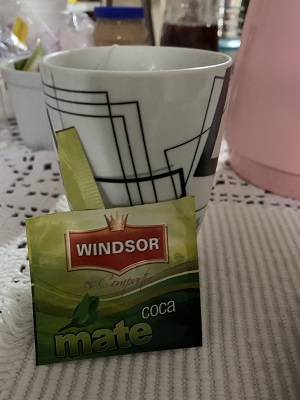 I know I've talked about this before but wanted to give this wonderful tea the spotlight. This is the first traditional item I had when I came here. It is said to help adjust to the altitude. Close your eyes and imagine the smell of freshly cut grass. I've always loved the smell, and now I know I love the flavor too! Mate Coca tastes just like the smell of freshly mowed grass. It is fresh and herbal. Now, each morning and evening, Anita includes this with my meal. It is warming and delicious.

I do wish I had remembered to take a photo of this! One evening, not too long after my isolation ended, Anita asked if I wanted to enjoy this traditional treat. The pastel (pastry) is delicious. It's a dough that is deep-fried and poofs up like a big pillow that takes up the whole plate. Inside is a small amount of simple cheese and the top is covered in powdered sugar. You have to deflate the pastry before eating it and puffs of steam escape as it collapses.

You would think that that was the best part of the treat, but no! The Api is a traditional hot drink that is sweet and comes in a glass mug so you can see layers of purple and white. The most amazing part of this drink is that it's made of corn! No fruit added (although I am guessing a fair amount of sugar). The different colors in the glass are actually different kinds of corn. It was thick, creamy and so delicious!

Silpancho is a main dish that consists of a large flat piece of meat, pounded thin and fried with rice, potato, finely diced veggies (tomato and onion) and a fried egg on top. This was the first traditional meal I had and Anita was kind enough to leave it outside my door while I was isolating.

Imagine taking everything that is in a Silpancho, sticking it in a bun and you've got Trancapecho! Inside the bun are some potato, rice, beef, egg and a tomato-onion mixture. I added a bit of the Picante peppers too. This was such a fun treat. On a chilly, rainy night we drove to La Isla, a drive-up grouping of restaurants that offer sandwiches and other food prepared quickly and served on plastic tables - or to go of course. We decided to eat there and I had the BEST time trying to eat this sandwich. It was so good! I am not an experienced Trancapecho eater though, so I made such a mess. I also had a traditional juice that is popular in Cochabamba that is flavored with cinnamon and has a peach pit on the bottom of each glass. 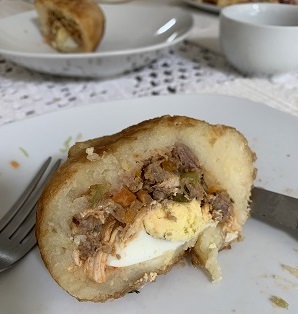 One afternoon for lunch, Anita surprised me with Rellenos! When I first saw them they looked like large fried potatoes but after I cut into mine, wow! It was a work of art. Inside the delicious ball of mashed potato, there was a hard-boiled egg surrounded by meat (beef and chicken) and veggies. The whole thing is fried. They were really great. These were originally made as a handheld lunch that was quick to eat (and delicious!) 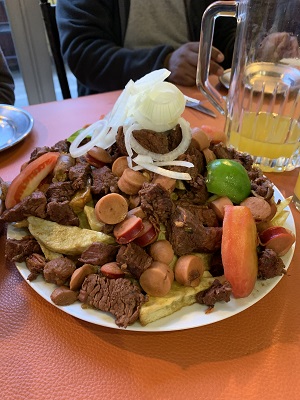 This may be the most fun out of all the traditional foods I have tried. We ordered it for dinner before going to the Parque de la Familia on Wednesday evening. This dish is made to share. On a large platter, the first layer is a mound of fried potatoes, a lot like potato wedges. On top of that, there is a delicious, marinated beef. On top of that is a healthy number of sliced hot dogs (I really appreciate the respect they give to hot dogs here). There are a few tomatoes, a few green peppers and it's all topped with onion. It's not in the photo, but there's also a hard-boiled egg. Served on the side is a thin beef sauce as well as mayo, ketchup and mustard. Eight of us split two platters and it was difficult to finish!

You may notice a pitcher next to the pique macho. At the restaurants I have been to, they offer freshly made juice. This one was passion fruit. I had a little, and it was delicious. I had to save my carbs for the potatoes though. I admit, it has proven difficult to be low-carb here! 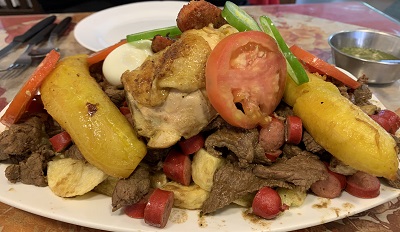 Later in the week, my friend Victor and I went out to lunch after CLIMAL, our language school, took us on a fun tour of Cochabamba. Victor hadn't been with us for the last pique so we decided to get it at La Casa de Gordo for lunch. It was SO BIG! On top of the traditional toppings, the dish also included a piece of chicken, an extra egg, a plantain, a chorizo and meat that we weren't sure about. (Later Victor figured it out - cow udder!) We both ate some of everything and didn't come close to finishing it. Lesson learned for next time - bring a couple more friends for pique! 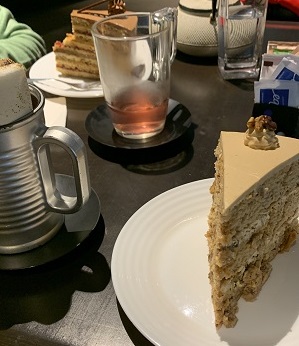 I considered not including what I enjoyed at the Chocolateria because it's not traditional but in the end, I decided to anyway. Sister Tere, a Dominican sister living in Cochabamba, and I went here to have coffee. Well, she ended up having fruit tea and I decided to have a hot chocolate as a treat. I also had a piece of torte as a treat too! The cake was delicious with layer after layer of cake and filling. I am only sad I couldn't try them all. As you can see though, they were huge! This is not the best photo, but you can see half of a mug next to it. That was my hot chocolate. It came out and had three jumbo marshmallows on top, torched just a little bit so they were golden brown. What was amazing was how the chocolate was more like melted chocolate and so rich and wonderful - like they didn't put water or milk was added. Sister Tere knows the owner and told me she has traveled the world to find the best way to make all of her creations. I can't imagine having anything better. 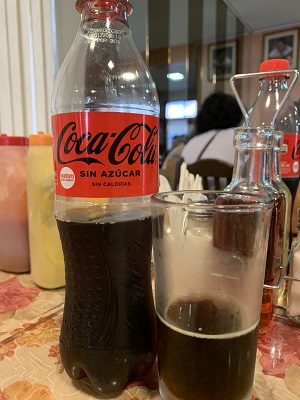 There are a few things I would still like to try including Sopa de Mani (peanut soup) and Chicharrón (grilled pork). I only have two weeks left here so I am not sure if I will get the chance but I am hopeful!

Once I arrive in Santa Cruz, there are all different traditional dishes so I will have to start over. That sounded like I wasn't looking forward to it. Really, I can't wait! I hear rumors that they are known for their cheeses, so I am looking forward to that! Also, fruit is popular in Santa Cruz's tropical climate, so it will be fun to try some new types of fruits.

(I just had to include this photo of Coca-Cola sin azucar (without sugar). I have been here for over a month and only had soda twice. It's a special treat for me and went great with the Pique Gordo!)

May you all find some togetherness around a dinner table sometime soon - God bless!

The food sounds delicious-as you say full of carbs too. I would really have to easy on the portions if I was eating there and take long walks. Enjoy in moderation!!!! Karen k


Ooh! How tempting! There is nothing like home-cooking. I can understand the difficulty of counting the carbs. It is evident that Bolivian food is made with lots of love and care-- a true work of art.