About Perpetual Adoration
Perpetual Adoration or round-the-clock prayer has been a cherished practice of FSPA since August 1, 1878—hence our name: Franciscan Sisters of Perpetual Adoration. Continuously, day and night, at least two people have been praying before the Blessed Sacrament. It is a way of maintaining awareness of God's presence in our lives and keeping vigil for the community, the city of La Crosse, Wisconsin, the church, and the world.

Each person has a human need to adore. It is one's response when contemplating all the wonder that is in daily life. This tradition of perpetual adoration reminds us, hour after hour, of God's presence in our lives and our need to be present in others' lives.

To submit a prayer request, please use our online Prayer Request Form.

Perpetual Eucharistic Adoration
Through perpetual eucharistic adoration, we offer God continuous praise and thanksgiving before the Blessed Sacrament exposed on the altar. Nurtured and strengthened by Jesus' presence, we live out this adoration in our daily lives as we strive to help those in need.

History of Our Adoration

Since 1878, Franciscan Sisters of Perpetual Adoration have been praying nonstop longer than anyone in the United States.

The practice began after Mother Antonia Herb, then leader of the congregation, made several requests to the local bishop for permission to begin perpetual adoration. Concerned it would impose too great a burden on the sisters, he refused. 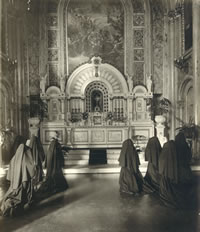 Determined to establish perpetual adoration, the sisters tried it out, praying two at a time for two hours. They demonstrated they could do it, and on August 1, 1878, at 11 a.m., the congregation—then called Sisters of St. Francis—began praying around the clock and soon thereafter became Franciscan Sisters of Perpetual Adoration.

Two people have prayed before the Blessed Sacrament ever since. In recent years, more than 175 prayer partners have joined in the vigil.

For FSPA, there is great significance associated with the lard light, the candle set within a deep dish. Read the Lard Light Story.