St. Rose Convent, built in 1870, serves as the spiritual heart and administrative center for Franciscan Sisters of Perpetual Adoration. Although the congregation's sisters minister throughout the United States and beyond, Mary of the Angels Chapel and the Perpetual Adoration Chapel unite them all in prayer for each other, the church and the world.

Mary of the Angels Chapel:

Mary of the Angels (Maria Angelorum) Chapel in St. Rose Convent was consecrated August 2, 1906, and serves as the place of prayer for Franciscan Sisters of Perpetual Adoration. Here sisters have welcomed thousands of visitors to experience their Franciscan hospitality and prayer. Enjoy taking a virtual tour through our chapels via the videos and photos below.

Our emerging promise
Since recording the above video, we've offered an emerging promise of adoration. Through February 25, 2020, continuously, day and night, at least two people prayed before the Blessed Sacrament. Today, we continue adoration before the Blessed Sacrament daily 6 a.m. to 10 p.m. in our Adoration Chapel. It is a way of maintaining awareness of God's presence in our lives and praying  for the community, the city of La Crosse, Wisconsin, the church and the world. Each person has a human need to adore. It is one's response when contemplating all the wonder that is in daily life. This tradition of perpetual adoration reminds us of God's presence in our lives and our need to be present in others' lives. 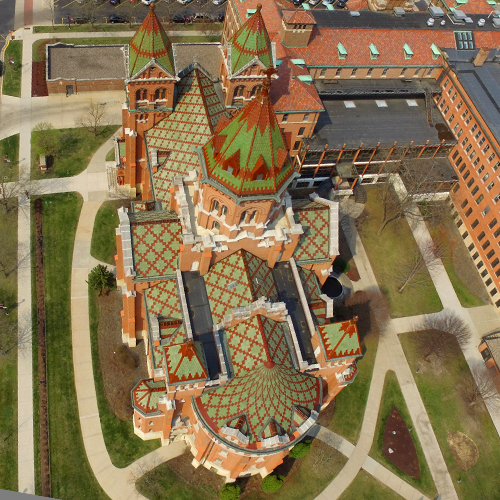 Design
The chapel is cruciform in design with nave, apse (part of which is separated from the sanctuary to constitute the Perpetual Adoration Chapel), and transepts. This architectural drawing of the chapel was found in 2005 and presented to FSPA as a gift celebrating the 100th anniversary of the dedication of the chapel. 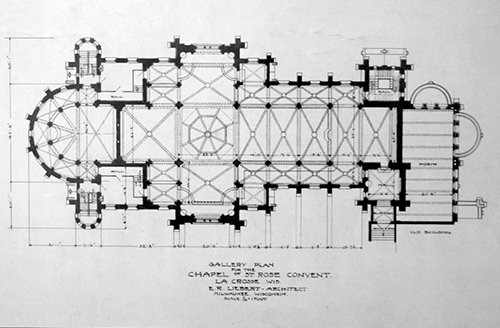 St. Michael
In 1923, a fire threatened to destroy St. Rose Convent and the beautiful chapels. But a statue of St. Michael had been placed in the vestibule just outside the main chapel doors with instructions from an early leader, Mother Antonia Herb, to guard and protect the sacred chapels. Though fire destroyed the west wing of St. Rose Convent, it stopped conspicuously short of the vestibule where St. Michael stood guard. That corridor alone and the chapels beyond were untouched by the fire. 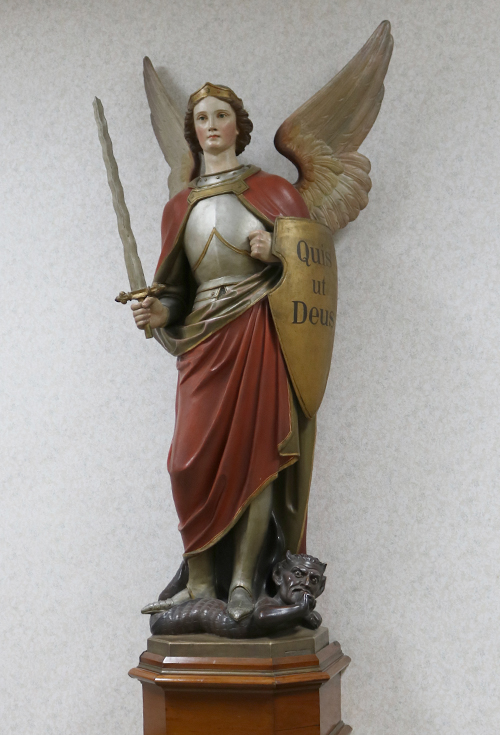 Entrance
As one enters the chapel and turns to view the area just above the entrance door, a relief of Moses before the burning bush reminds the worshiper that this is a space in which God wishes to commune with his creatures and family. The entrance is also flanked on each side by two of the 163 angels found in Mary of the Angels Chapel. 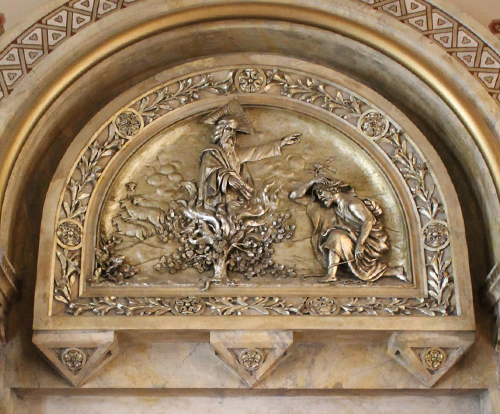 Pillars and Columns
The chapel pillars are Corinthian in style, distinguished by rich capitals and formed by Acanthus leaves. Wreathed within the leaves are figures of praying angels. The concrete columns resemble Norwegian marble. Nineteen different processes were employed to produce this beautiful marble effect. 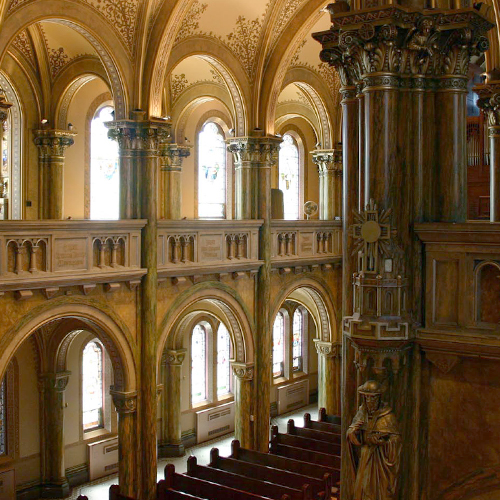 Baptismal Font
In recent years, the baptismal font, designed in the early 1990s, has been placed in the entryway, as it is here, to remind those entering that they are called to a life of holiness by virtue of their baptism. It is not only vowed religious persons who are called, but all Christians through their baptism. 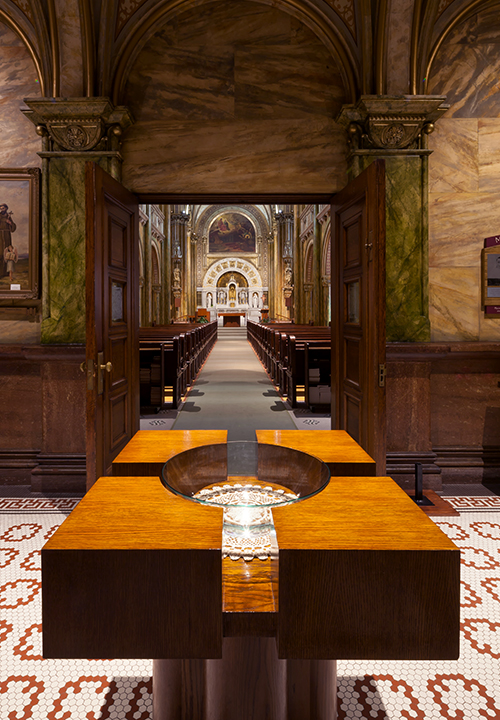 Pews
The woodwork in Mary of the Angels Chapel is the result of the craftsmanship of the workers employed by the Hackner Alter Company. A Greek cross and a sculpted rose, a symbol of Mary, adorn each hand-carved, red oak pew. The egg and dart decorative design, seen on the pew arms, represents life and suffering, and was created entirely by hand. 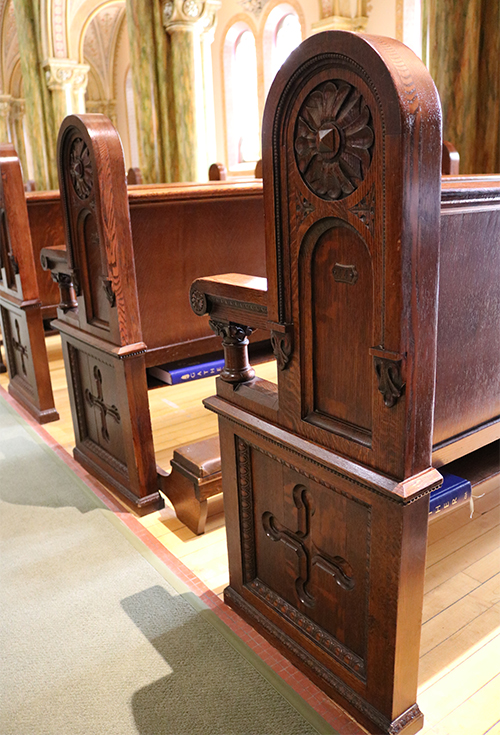 Altars
The original altars are made of Italian marble and decorated with gold bronze, onyx pillars and inlaid mosaics of green and gold Venetian glass and mother of pearl. Altar statuary is of Carrara marble. Venetian mosaics on the central marble altar symbolize the Eucharist. The central medallion represents the high priest Melchizedek offering bread and wine. 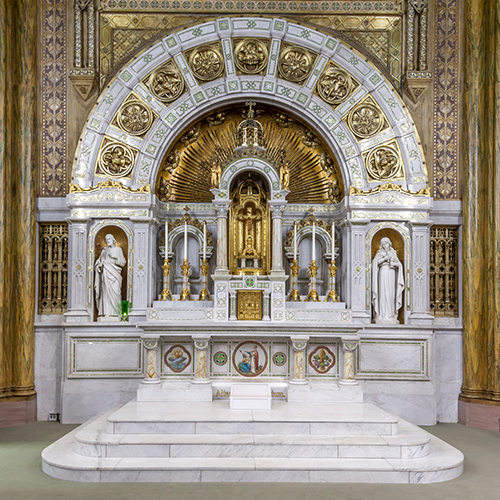 After the liturgical renewal of the 1960s, the altar of sacrifice was placed under the central dome. Simple in design, it stands as a strong and dignified piece. It is here that the mystery of Christ is celebrated in every Mass. 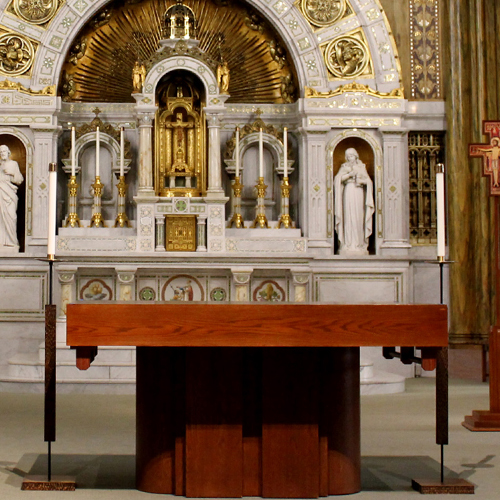 St. Joseph
The statue of St. Joseph holds a place of honor at the left side of the main altar. St. Joseph is honored as protector of the Holy Family and as a guide and protector for congregations of women religious. Evidence of his aid in FSPA history demonstrates his fatherly interest in the well-being of the congregation.

Side Altars
The Sacred Heart Altar, dedicated to the Sacred Heart of Jesus, and the Blessed Mother Altar, dedicated to the Immaculate Mother of God, harmonize well with the main altar in ornamentation, architectural design, and beauty of construction. The statues of the altars are of Carrara marble, imported from Italy and executed from models furnished by the Hackner Altar Company.

Mosaics
Symbols of the Eucharist are found in mosaics on the front of the main altar. Composed of green and gold Venetian glass and mother of pearl, the central medallion represents the story of the high priest Melchizedeck offering bread and wine, as recorded in the Hebrew scriptures. The medallion on the right recalls the loaves and fishes, and the one on the left, the wheat and grapes. 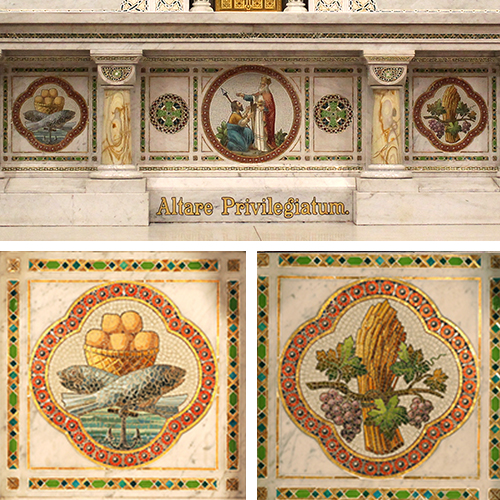 Paintings
Paintings in the sanctuary represent the three divisions of the Franciscan Order: The Friars Minor, Poor Clares and Third Order Regular and Secular. They are all offerings from the studio of the nationally renowned artist Thaddeus von Zukotynski of Chicago. Zukotynski possessed the ability to represent his characters as graceful, dignified figures, sustained with dramatic truth and grandly conceived. 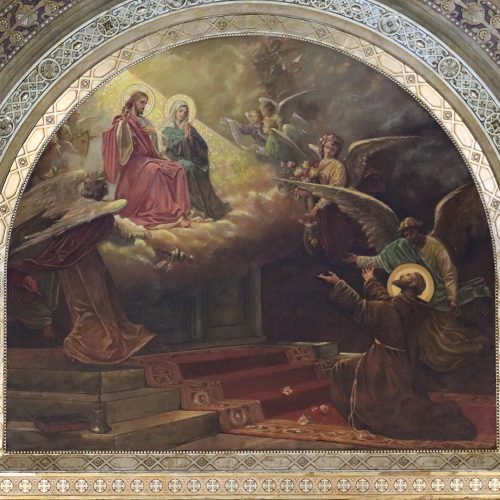 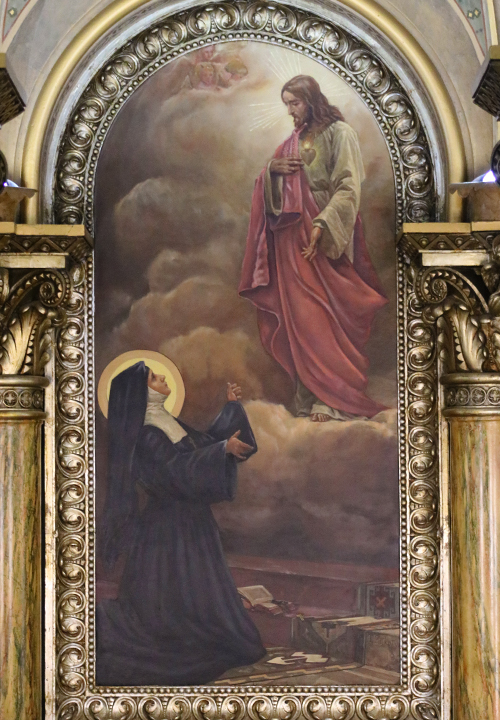 St. Clare and Second Order Franciscans
The work on the north wall of the sanctuary represents the event that marks the beginning of the Second Order of St. Francis, popularly known as the Poor Clares. On Palm Sunday, 1212, Clare presented herself to Francis and his followers in Assisi and received the coarse habit and knotted cord signifying her commitment to a life of poverty and simplicity. 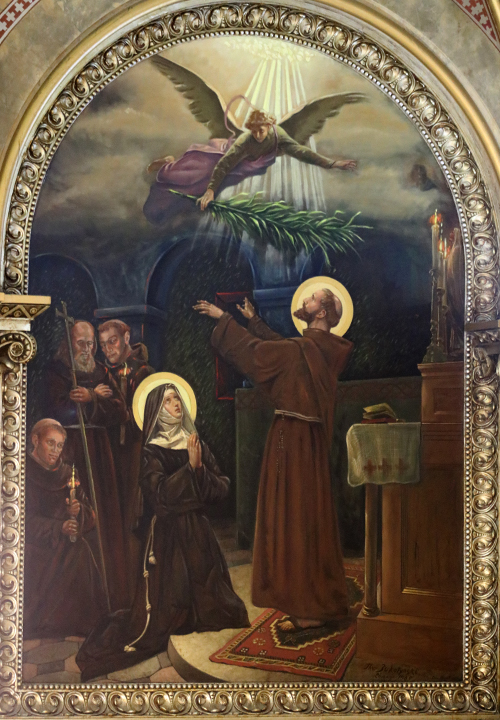 Third Order Franciscans
This painting, displayed on the south wall, depicts St. Louis of France (1215-1270) and St. Elizabeth of Hungary (1207-1231), 12th century tertiaries, meeting with St. Francis of Assisi. St. Elizabeth is shown receiving the Franciscan cord, which symbolizes her following of Francis in devotion to Jesus and charity to the poor. 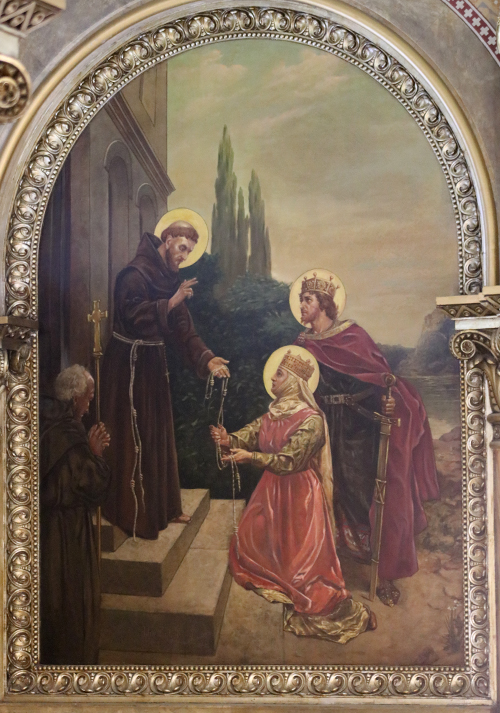 Annunciation of the Blessed Virgin
Just above the Blessed Mary Altar appears a companion piece to the Apparition of Jesus to St. Margaret Mary. This painting illustrates the Gospel story of the angel Gabriel's message to Mary that she is to be the mother of the Son of God. Her response of yes set the whole world on a new course of redeeming love in human form. 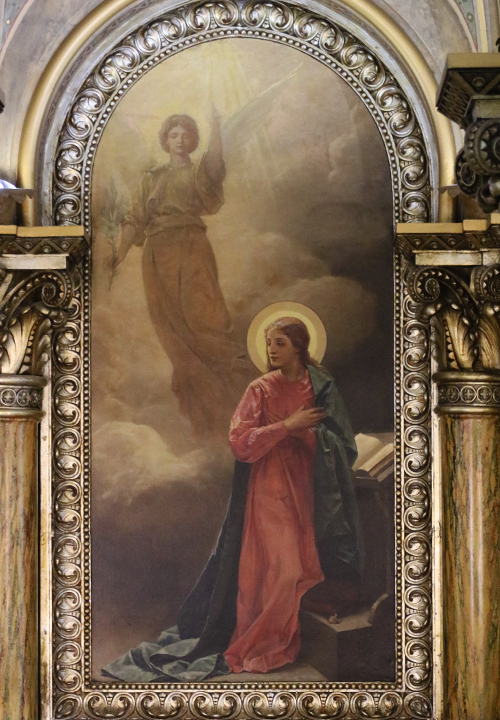 Mary of the Angels and the Perpetual Adoration Chapel feature more than 100 windows of Bavarian stained glass, furnished by the Royal Bavarian Art Institute of Munich, Germany. The windows are made of "old glass," which means that the glass was blown in cylinders, then cut and flattened to the size needed for each piece. Depictions of the life of Jesus, Mary, angels, saints, Bible parables and symbols of the theological virtues of faith, hope and charity can be found within the windows throughout the chapel. 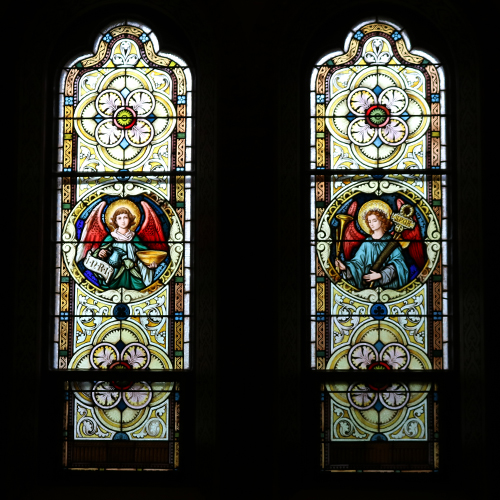 Ten bronzed statues, visible from a point in the nave below the great central dome, represent Saints Peter and Paul, the Latin Father of the church and the Major Prophets. All the statues were designed and created specifically for Mary of the Angels Chapel. No duplicates exist. Chapel furnishings are also original. 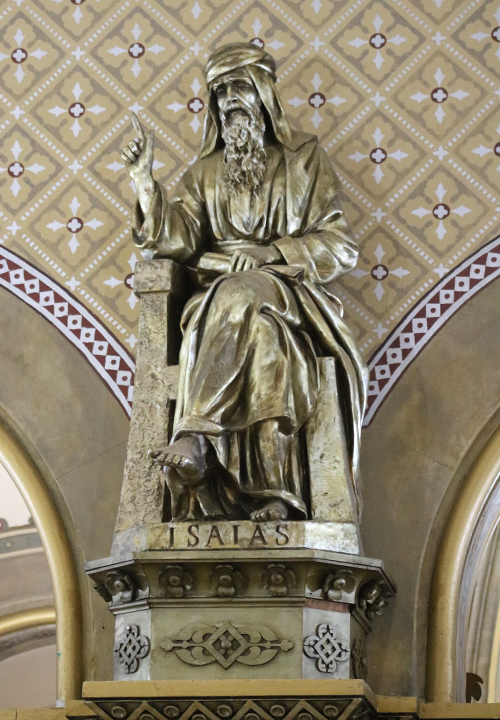 Dome
This stained-glass window portrays the Holy Spirit of God descending in a stream of light surrounded by heads of winged cherubs. Six sides of the dome represent the six days of creation, the seventh side represents God's resting and the eighth side represents the resurrection of the faithful assured by their baptism. 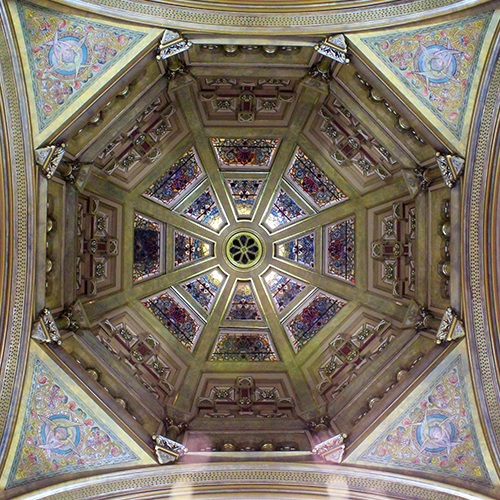 Sanctuary Skylight
The vaulted skylight is surrounded by four ornamental medallions: the liturgical symbols of the Bible, the Keys of God's Kingdom; the Cross of Christ; the Crown of Glory; and the fleur-de-lis, a symbol of the Blessed Virgin Mary. The sanctuary ceiling is finished in gold filigree on a background of blue. 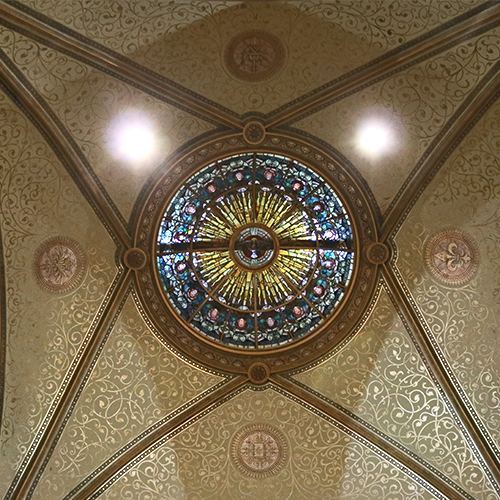 Stations of the Cross
Each of the fourteen stations of the cross are made of bronzed beechwood and placed along the walls just above the double windows of the nave and under the organ loft. They were designed expressly for the Mary of the Angels Chapel and were hand carved by the Hackner Altar Company of La Crosse. 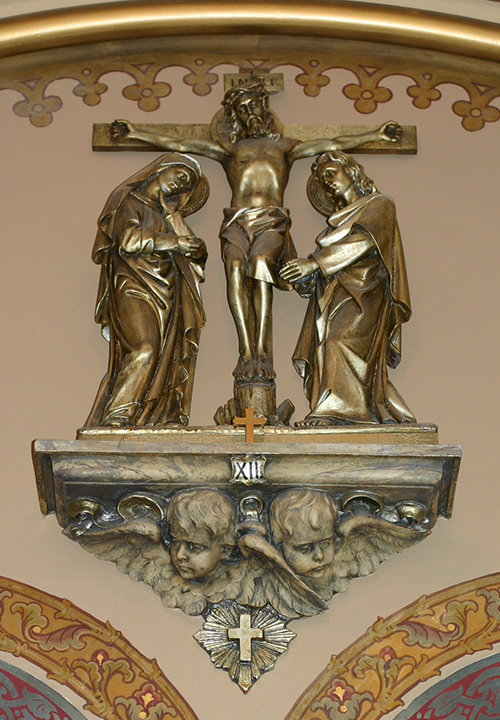 Organ
The gallery connects the two chapels and choir loft area. A Casavant-Freres, mechanical (tracker) action, pipe organ installed in 1983 serves the worshipping community. It has 1,422 pipes, 20 stops and 30 ranks playing on two keyboards and pedal. The solid oak case of this instrument was designed and finished to be appropriate with architectural features of the chapel space. 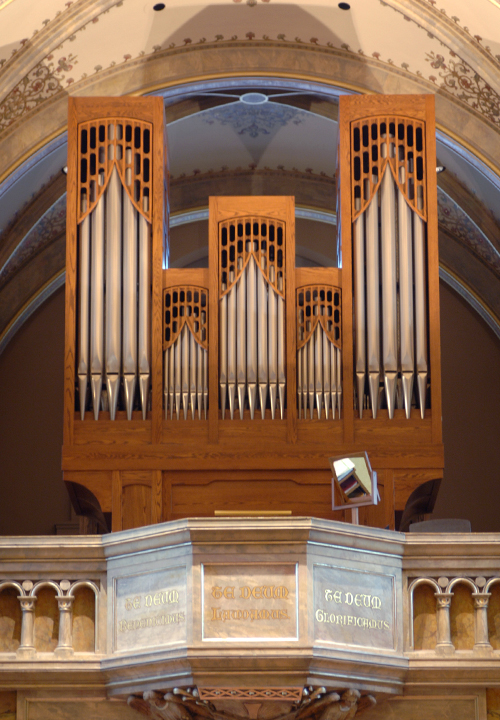 The Chapel of Perpetual Adoration serves as the Franciscan Sisters' namesake. Since August 1, 1878, day and night without interruption, FSPA members and prayer partners have kept vigil before the Blessed Sacrament exposed, praying for our community, the church, the city and the world. This chapel is dedicated to the Sacred Heart of Jesus. 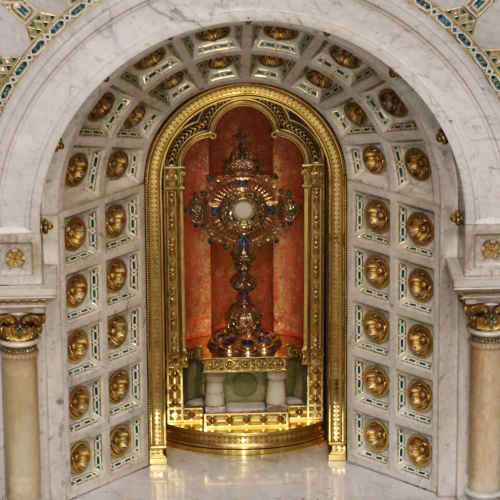 Altar
This Romanesque architecture designed altar is unique in form and ornamentation, and complements the altar in the Mary of the Angels Chapel. However, the gold bronzes are lighter and richer, the mosaic more exquisite and the symbols fewer and simpler than those in the larger chapel. 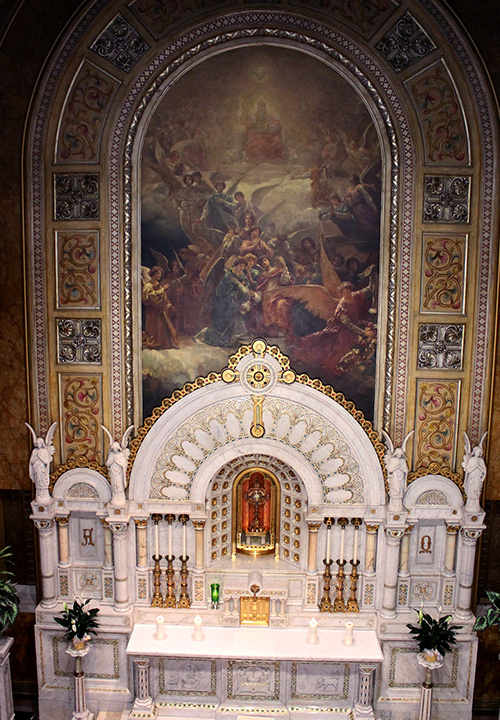 Sculptures
The three beautifully carved panels designed and executed by the celebrated altar builder E. Hackner, are strictly liturgical in design and symbolic of the mysteries of Faith. These three panels appear on the frontals below the mensa of the altar, and represent the font of the living water, ark of the covenant, and deer drinking of living water. 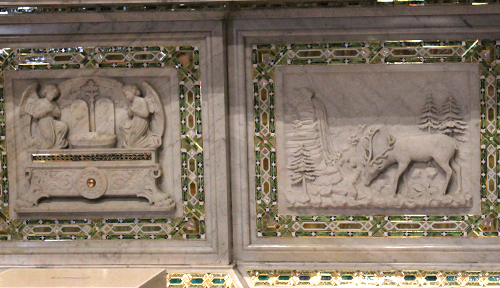 Paintings in the Perpetual Adoration Chapel represent the adoration of the Eucharist and the mystery of the Blessed Trinity, along with portrayals of saints of the Eucharist. Like those in the sanctuary of the Mary of the Angels Chapel, the paintings are the work of the renowned artist Thaddeus von Zukotynski, Chicago, Illinois. 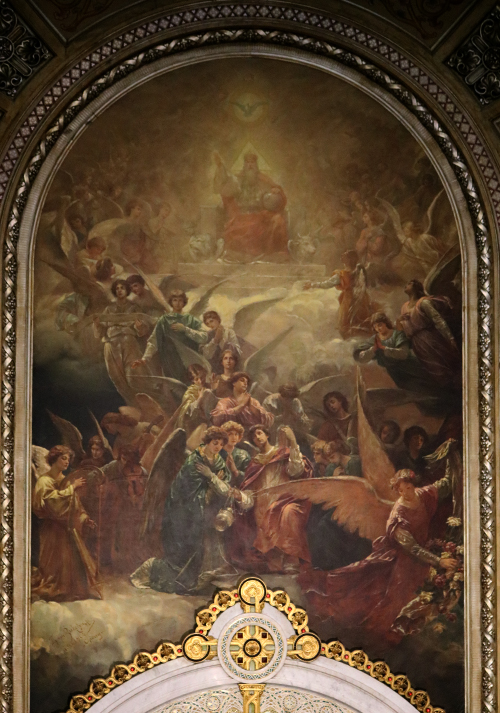 The windows in the Perpetual Adoration Chapel represent Mary, Queen of Angels, as the central theme, or figure, surrounded by the nine choirs of angels in the other nine windows respectively. Beautiful in design and coloring, they were made from original patterns submitted by the Hackner Altar Company to the Bavarian Art Studio at Munich, Bavaria. 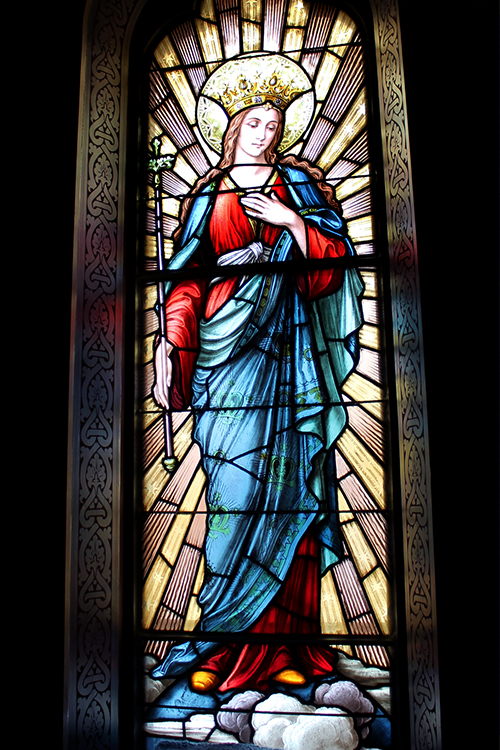