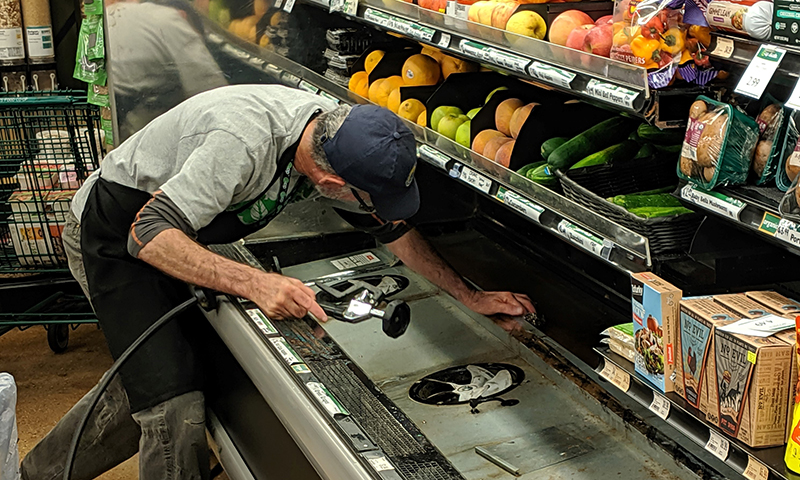 A simple but fundamental example of white privilege is access to affordable, healthful food. The COVID-19 pandemic may have given a small glimpse of what it is like to go without what you want to buy when you want to buy it. But for the many urban and rural communities without full-service grocery stores — areas referred to as food deserts — this is the everyday reality.

If you've lived in a food desert, you may be more inclined to call the experience "food apartheid." Why? The absence of grocery stores in these communities is not happenstance but systemic racial injustice.

Sadly, our country has a long history of racial injustice. When it comes to food, one of the earliest systemic injustices impacted land ownership. After the American Civil War, the government enacted a program dubbed "40 Acres and a Mule" (the story of which was shared on NPR's "All Things Considered" on Jan. 12, 2015, at npr.org). The program was an attempt to support the efforts of African Americans working to build sustainable lives on the land.

Caucasian staff members of the United States Department of Agriculture fought Black access to this and other farm programs every step of the way. Evidence of this resulted in the landmark Pigford vs. Glickman decision, the successful class-action suit brought by North Carolinian Timothy Pigford that found the USDA guilty of widespread discrimination. As explored in the book "Dispossession: Discrimination Against African American Farmers in the Age of Civil Rights" by Pete Daniel, Judge Paul Friedman suggested that General William T. Sherman's unfulfilled promise of land during the Reconstruction era resonated with Black farmers' journeys from slavery to freedom to sharecropping to ownership and, finally, to debt and dispossession. As the Pigford decision made clear, racism had continued to circulate through federal, state, and county USDA offices.

I live in Western Iowa and am very aware of how our federal government's farm policy dictates what happens to our farmland and farm practices. Earl Butz was U.S. Secretary of Agriculture from 1971 to 1976 under presidents Richard Nixon and Gerald Ford. In his time leading the USDA, Butz drastically changed federal agricultural policy and re-engineered many New Deal-era farm support programs. His mantra to farmers was "get big or get out." These policies, combined with science and technological advancements, increased agriculture yields and made hand labor obsolete but drove 3.1 million farmers from the land.

Black land ownership is considered critical to food security in African American communities. Black/Land Project tells the stories of the impacts of Black land ownership and makes this declaration: "Black/Land creates fertile soil in which the seeds of self-determination and social change can germinate, take root and grow."

Another example of systemic racial discrimination was the 1930s practice of redlining. The 1934 National Housing Act set guidelines for bank lending for communities. The term "redlining" comes from the development of the New Deal and by the federal government's maps of every metropolitan area in the country. Those maps were color coded by the Home Owners Loan Corp. and the Federal Housing Administration and then adopted by the Veterans Administration, designating neighborhoods in which it was "safe" to insure mortgages. Predominantly African American communities were colored red to indicate to appraisers that these neighborhoods were too risky in which to insure mortgages. The resulting disinvestment in African American communities, as reported in NPR's Fresh Air broadcast, "A 'Forgotten History' of How the U.S. Government Segregated America" on May 3, 2017, led to less Black home ownership and Black wealth, to more white flight and an exodus by businesses, including grocery stores, to the suburbs.

In a 2018 study funded by Reinvestment Fund, an organization "reimagining neighborhood revitalization by combining expertise, analysis and creative approaches to investing with a social purpose," found that while healthy food access had improved, 17.6 million people were still experiencing food insecurity. In recent years, there has been a movement in food apartheid communities to improve access by organizing food cooperatives. I am fortunate to have the opportunity to work with a few of these start-up food co-ops. We estimate that there are currently more than 25 communities around the country working to start food co-ops or other types of food stores to address healthy food access. Two examples include Gem City Market, located in Dayton, Ohio, and Louisville Community Grocery in Louisville, Kentucky.

I frequently hear my white friends and family struggle with the concept of white privilege. One of the common comments I hear is, "I worked my way up, and so can everyone else."

But access to healthy food is just one white privilege born from systemic injustices that "working your way up" does not resolve.