Rediscovering the Beauty of Hospitality

I have been doing some intentional discernment lately about who I want to be in the world. Within me, there is a mix of personality, experience and skills, and central to all of that is my spirit. Although these parts of me are permanent, how I bring them to the world is my choice. Maybe a good way to say it would be my choice of presence.

In my discernment, the phrase that most calls to me is “Radiating Christ’s Love”. This beautiful sentiment speaks to not only my personal acceptance of Christ’s love and how it lives in my heart but suggests that this same love goes out from me into the world.

As I ponder this peaceful sentiment, I can’t help to wonder what that radiance might look like. I’ve noticed that, like Francis, I am drawn to simplicity, and while working with the people of Bolivia and Sister Yanira, I have rediscovered a simple and powerful expression of this radiance in hospitality.

There are countless examples of hospitality I have received, especially the simple kindness of offering chairs and conversation to two sisters walking through a neighborhood. As I have mentioned previously, I find this simple act of hospitality to be a great gift of love and acceptance.

There are five stories that quickly come to mind regarding hospitality that have both surprised me and helped me to grow in my appreciation of this gift.

Chicha: Last week, we were walking through a barrio (neighborhood) and stopped at a house to ask if there were any young children living there. If there were, Sister Yanira would have talked to them about nutrition and offered the help of Santa Clara Nutrition Clinic if the kids needed it. In this case though, there were no kids, just an older gentleman. Like most other families, he brought out two chairs so we could sit down and take a little rest from our walk. Next, he found a couple of cups and filled them with Chicha, a traditional drink in Bolivia made from different starches like corn, yuka, soy and even peanuts. It was both cold and refreshing – and extremely appreciated. Soon, his wife joined us and we visited for about 15 minutes, during which we learned that they had been married for almost 50 years. As we left, I got the impression that both we and they had made a couple of new friends. 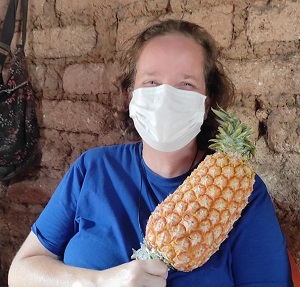 Pina: I am fortunate to be here now when pineapples are in season. They grow sweet and juicy here. I even eat the core it’s so good! Sister Yanira showed me how to make pineapple refresco by boiling the outer parts of the pineapple. With a little sweetener, it’s really delicious! As we finished up one of our workshops and were preparing to leave, a mom brought out a pineapple, freshly harvested, as a gift for us to take with us. It probably would seem to some like a small gesture, but for me, I understood the value of the pineapple to that family. Their generosity was gigantic that day.

Musaca de Platenos (Plantains): A couple of weeks ago, we visited a home to teach them how to make things with soy, specifically soy milk and Canapé de Soya, a bread made with soy meal, butter, eggs, a bit of flour and plenty of cheese. When we got there at about 8:30, they were in the process of making breakfast. The family all worked together to make the traditional dish popular in the area. It consists of frying plantains in oil -- green plantains specifically. Because they aren’t yellow yet, they are more firm and not as sweet. After they finish frying, they put them into a large mortar and pestle, pounding them and grinding them until they are in small pieces. I will admit at that part of the process I got busy with our parts so didn’t see the end of the process. Almost two hours after the breakfast was started it was finally time to eat. I expected to wait for them to finish and continue with the workshop. I should have known better 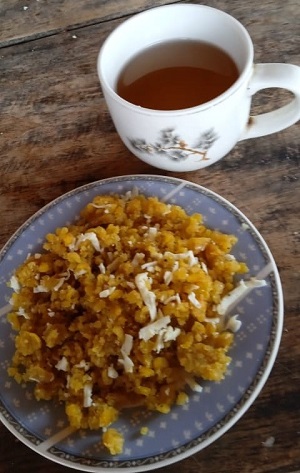 though. Here in Bolivia, I have found the hospitality to continue to surprise me. This day was no exception. A few of the kids sat down at the table where we were working and then two plates along with some cinnamon tea were brought for Sister Yanira and I! After all that work, I really appreciated being offered some. I was even more appreciative when Sister Yanira explained that it is a popular dish for breakfast because it is something that is nutritious and filling, especially when families can’t afford simple extravagances like bread, the most popular breakfast here. I realized how much I had assumed it was a choice to prepare a traditional dish, not realizing its popularity stemmed from poverty. We ate it with our fingers by compressing the little bits together. We laughed and talked as we enjoyed this generous hospitality. 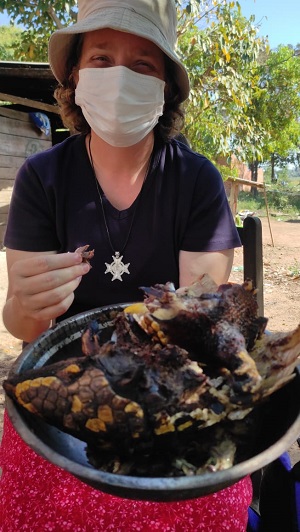 Armadillo: “We haven’t gone to the store today, I don’t know what I can offer you.” A kind mother said as she, her husband and her little girl welcomed us to sit with them on a walk through a barrio one day. Although both Sister Yanira and I assured her it was fine and that we didn’t need anything but conversation, she disappeared as we chatted with her husband. Soon, she returned beaming with a big smile. She had found a great bit of food to share and presented to us a roasted armadillo, complete with outer shell, claws and head, to enjoy as a gift of hospitality from her. Especially because I knew that this was likely, literally, all they had to offer us, I enthusiastically accepted it telling them how I had never eaten armadillo before. I think I heard Sister Yanira whisper “Aventura!” right before she instructed me how to dig in under the shell to extract some rib meat, sprinkle it with salt and eat it with my hands. This was a stretching experience for certain, and I felt honored to be a part of it. For those who are wondering, it tasted a lot like pork. 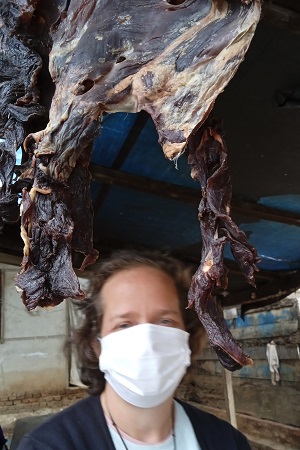 Dried Meat: One thing I noticed somewhat regularly on our walks, were slices of meat either hanging on a clothesline or barbed wire around properties at the homes of people here. I am sure the barbed wire is for security, but it’s not ominous like it is in the United States. Sometimes people dry clothes on barbed wire. One day, as we were finishing up a workshop and preparing to leave, Sister Yanira began laughing because it just so happened that I was standing behind some drying meat and as she looked at me, it looked a bit like a bonnet of meat! As we laughed, we talked a bit with the family about it. I soon realized that it was a lot like beef jerky when it was done drying. It lasts a long time and has lots of flavor. When they heard that I had never tried it there, they quickly tore off a generous portion of the dried meat and threw it directly into the glowing embers of the fire we had used to make the food in the workshop. They then pulled it out and handed it to us. Through my American culture lens, I would never have considered meat dried in barbed wire and then thrown into ashes. Luckily for me, I have been here long enough to gently place my culture’s sensibilities on the side. As I chewed on the warm meat, I was surprised by the delicious flavor. It was better than any beef jerky I had ever tasted. I was so grateful that another family who needed our help was so willing to be generous with the little they had.

As I think more about these stories of incredible hospitality, I wonder how these experiences have changed me. I wonder how it will be when I return to the United States. Before this experience, I wouldn’t have thought twice about ignoring a doorbell when I hadn’t made plans for friends to visit. I would have assumed it was a salesperson or possibly someone wanting something from me. I have reserved my hospitality for those who are close to me or who I want to get to know better.

As I consider my core desire to radiate Christ’s love, these ideas no longer apply. I begin to imagine a broadened sense of hospitality that doesn’t exclude or have limitations. For now, I will leave it to my imaginings and know that this new perspective will be a gift that I will bring with me upon my return.

True Franciscan hospitality learned more deeply from those live it daily as part of their culture!


What a beautiful post! Sometimes accepting hospitality is harder than offering it! I admire your fortitude in accepting/eating the armadillo. I don’t think I could have done that. ??????


This brought back so many memories I had forgotten from my time in Guatemala and Peru over a decade ago - especially chicha!