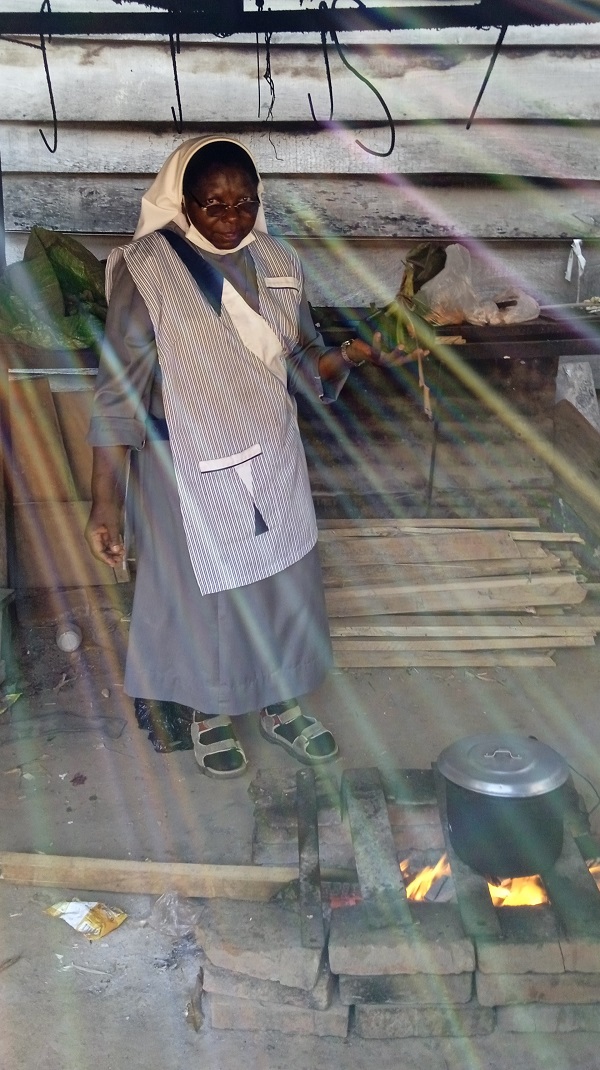 Tuesday was a good day in my ministry, and this photo seems to reflect a divine approval of our work, especially for my friend, Sister Scholastica!

Sister Scholastica is a Tertiary Sister of Saint Francis from Cameroon who is spending a few years with her sister province here in Bolivia.

Here's what happened. On Tuesday of last week, Adriana (another woman who works at Santa Clara), Sister Scholastic and I arrived at a home to teach the family how to make Leche de Soya (soy milk).

As we greeted the family, we learned that a young man in his 30's, named Justo, was diabetic. He was very thin and very sick. Sister Scholastic has a lot of knowledge regarding diabetes and gave him and his family some ideas on different food that can help.

She left for a short time to pick up medication and a test kit. A test of his blood sugar quickly indicated that he was at an extremely dangerous level. Medication was administered and Sister Scholastica spent the rest of the morning cooking with the family and teaching them healthy, nutritious food for diabetics. When we left, they had a day's worth of food ready for Justo to eat.

The next day, Sister Scholastica visited again and happily reported to us later that his blood sugar had dropped in half thanks to the medication and food. A bit of a miracle if you ask me!

This photo was taken in their cocina (kitchen) where Sister Scholastica was cooking some plantains (verde - they had to be green!) with vegetables and a little bit of chicken (purchased with the help of those who sent money with me when I was at home - thank you for that!). I didn't do any adjustments to the photo to add the rainbow streaks - they just appeared. When I saw the photo, I couldn't help but think that it was God's way of saying "Way to GO, Sister Scholatica, my beloved daughter!"

This week, I am spending extra time praying for the families we are working with. They are such loving and caring people, my prayer is that they receive what they need to live and love. Amen.

You two surely made a difference in Justo’s life long-term!


The rays of light are a SIGN that Sister Scholastica is saving Justo's life, by divine grace.


Thanks for continuing to share all the ways God is allowing you all to be His hands and feet, praying for all the saints that have been equipped for "works of service, so that the body of Christ may be built up" Ephesians 4:12


Wow! What a photo. And what a graced ministry. Are those plantains she is holding? Note from Meg: Yes they are - love plantains!


Those "rays" are His light shining upon you and the good work you all are doing! God Bless you and your help to all of them.