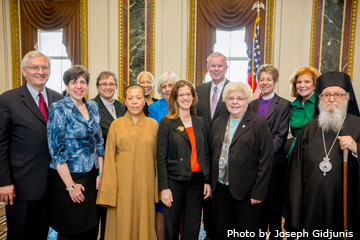 Modern-day slavery. It’s defined as the trafficking of humans for sex and labor. Perhaps alarmingly, it’s the third-most powerful source of criminal commerce, after drugs and firearms, all over the world. It’s reportedly an annual exchange of $32 billion for the dehumanization of more than 20 million adults and children. It’s a global atrocity that Sister Marlene Weisenbeck has studied intensively as a member of the White House Advisory Council on Faith-Based and Neighborhood Partnerships. It’s a form of exploitation she is proud to proclaim as a universal priority for women religious. It’s a crisis she was honored to address at Yale University in New Haven, Conn. And it’s a new challenge of social justice for FSPA.

The creation of the advisory council coincided with the 150th anniversary of the emancipation proclamation—an event commemorated by President Barack Obama in September of 2012. The group is responsible for identifying the ultimate delivery of social services, appraising public policy for partnerships of faith and community and making recommendations to the president and administration on changes in policies, programs and practices. They are 15 religious leaders who represent organizations of many genres like the National Association of Evangelicals, United Way Worldwide, the Greek Orthodox Archdiocese of America and the Buddha’s Light International Association. “I believe the support I expressed for health care reform during my presidency of the Leadership Conference for Women Religious led to my invitation to serve ...” Sister Marlene considers.

By their collective efforts, the advisory council has submitted the report Building Partnerships to Eradicate Modern-day Slavery to President Obama. It encapsulates the trafficking atrocities that exist in every corner, in every nation, to women, children and men of every ethnicity: “Slavery is pernicious and vast; it is a hidden, complex and often well-organized transnational crime, occurring on an immense scale around the world.” Sister Marlene’s councillary charge was to identify the efforts of women religious worldwide to stop human trafficking, primarily sexual abuse and exploitation. “I was astounded by the coalitions created in a quiet way, I think, because that’s often the way women religious work.” With communities posted on local levels as well as in international provinces, “We’re able to affect a global effort on this need in ways that other groups are not.” 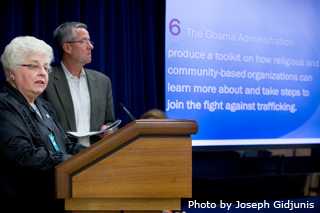 She identifies a few of the more vocal groups—armed with awareness, advocacy and action—that she discovered. Stop Trafficking is a coalition of nearly 80 congregations of primarily women religious who act both as sponsors for the organization and who take corporate stances against human trafficking. The Polaris Project facilitates the National Human Trafficking Hotline, provides victim outreach like emergency services, group therapy and transitional housing; and also maps out victim resources state-by-state on its website. The project is replicated in the efforts of women religious in the Bakhita Initiative which also provides an online resources map (one that covers all of North America and part of Central America) as well as conferences, workshops, corporate advocacy, educational materials, legislative advocacy, research and prayer.

Sisters have also been getting involved around the country in sports events—major magnets of human trafficking activity—calling hotels, urging management to sign Epcat-USA’s Code of Conduct agreement and delivering educational materials for staff. “In New Orleans we’re really proud of the effort the local archbishop made with both the 2013 Super Bowl host committee and owners of the New Orleans Saints football team.” With financial support from the sisters they purchased game-time advertising to run PSAs. On the government level, Sister Marlene’s learned the greatest need is immediate care for trafficked individuals. “We don’t have enough shelters and beds, therapy programs and immigration assistance to aid in transition to a stable life. I think that’s going to be a big focus in the future.”

On behalf of the LCWR Sister Marlene was called to further foster such efforts through Women Religious Making a Positive Change in the World, a lecture given at St. Thomas More, the Catholic Chapel & Center at Yale University, in February. It was her inaugural visit to Yale. “I was elated beyond my expectations.” She was also thrilled to share the stage with Sister of Mercy Janet Ruffing and Sister of Social Service Simone Campbell. The panel itself, she feels, was “very well received. I think a lot of it had to do with the national and international attention women religious are now receiving because of the Vatican’s assessment. We perceive that people want to be involved with us; they want to know what our experience is about, what we’re doing,” and in doing so “to be as public as we can possibly be.”

That includes the people of the La Crosse community. “When I got home I said to myself, ‘I wonder if there are any victims here.’” Sister Cormarie Wernimont referred her to a board member of the La Crosse Jail Ministry program. Through that source Sister Marlene learned about a small population moving through the system for involvement in drug trafficking, yet outreach efforts are meager. “What happens to these people? Is anyone giving them hospitality or assistance or direction at all in their lives? We invite them to our churches and try to be hospitable,” she says, “but they don’t show up.”

That may be the biggest barrier between the help of women religious and the horrors of human trafficking—the faceless victims in our midst. “Once they are released from prison,” she says, “they disappear.” And yet their advocates in La Crosse and around the world continue the search to find them.