Tammy Caspersen
It started with a simple invitation. Then, a phone call was made on her behalf. 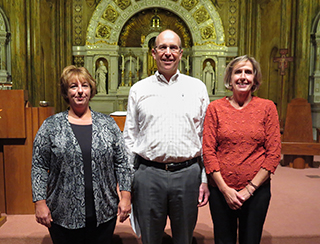 The tendering was to join FSPA in affiliation, a suggestion from Sister Bernice Newton to a CNA who works at Villa St. Joseph. Sister Bernice went so far as to make the first phone call to the affiliation office, requesting information about the program to pass along.

All was done for new covenant affiliate Tammy Caspersen, who grew up on St. Joseph Ridge and now resides in Sparta, Wisconsin. With degrees in medical assistance as well as cosmetology (from the Scientific College of Beauty and Barbering), Tammy is also a home health care aid who manages the West Salem Senior Center and runs a beauty salon from her home. She’s certified in phlebotomy and sanitation as well. As a member of Bangor, Wisconsin’s St. Mary’s Church who volunteers for monthly meal service and eucharistic ministry to the homebound, her spiritual commitments are just as important to her as her professions.

Tammy, whose contact is affiliate Carolyn Klein, says she chose to join the program “to be in the presence of like-minded people of faith and spirituality.” And she, like Sister Bernice, is passing along those values—to her family. Kevin, her husband of 20 years, “has been so inspired by my journey that he has decided to begin the affiliation process for himself.” As for their two young sons, Caleb and Dylan, “I feel truly blessed to bring my knowledge and mission not just to my life,” she says, “but to theirs as well.”

Barb first came to feel such compassionate spirit when she and her family moved to La Crosse in 1983. Her husband had taken a job at Franciscan Skemp Medical Center (now known as Mayo Clinic Health System-Franciscan Healthcare) and interacted with FSPA in many capacities. “Sister Joyce Bantle used to babysit our boys [Ben, Paul, Joe and Mark] occasionally when they were little.”

Since then, Barb can count many other sisters as colleagues and friends. With a bachelor’s degree in dietetics from the College of St. Benedict in St. Joseph, Minnesota, she first worked as a dietitian at Regina Memorial Hospital (Hastings, Minnesota) for four years, then in the same capacity at St. Francis for four years before teaching in the dietary management program at Western Wisconsin Technical College (now known as Western Technical College) for six. While working as school secretary for La Crosse’s Mary, Mother of the Church Parish, Barb completed the Franciscan Spirituality Center’s Spiritual Direction Preparation Program and, since 2007, has served there as a spiritual director. Volunteerism—as lector for Mary, Mother of the Church, core community member at A Place of Grace and member of the Rotary Club of La Crosse—often seats her side by side with many FSPA (including her contact Sister Mary Kathryn Fogarty) today.

And after 30 years the time, in current tense, is right, Barb says, to become an FSPA affiliate. “I am looking forward to being part of a community that I can pray with, enter into relationship with in new and meaningful ways, that invites me into service, and with whom I share common values and a common vision.” And for all she’s received in La Crosse “I am looking forward to giving back in some small way for the many gifts I have received,” she says, “from this wonderful community of women.”

Joe Kruse
New covenant affiliate Joe Kruse, Barb’s husband, also speaks of now as the time to join FSPA’s affiliation program. “Barb and I had talked about making this commitment for years.”

Within that timespan he recalls vividly arriving at St. Francis Medical Center—in August of 1983—and meeting Sisters Joyce Bantle, Celesta Day, Julie Tydrich and Leclare Beres “all on the same day.” He came to work there, in the presence of FSPA, having earned a Bachelor of Arts in philosophy at St. John’s University in Collegeville, Minnesota, and a Master of Healthcare Administration from the University of Minnesota’s School of Public Health. He is certified as a Fellow of the American College of Healthcare Executives and serves Mayo Clinic Health System-Franciscan Healthcare as chief administrative officer.

In the mirror of his many achievements, Joe’s giving to the community is generous. He serves as treasurer of A Place of Grace and a board member for the Robert & Eleanor Franke Charitable Foundation, La Crosse Area Chamber of Commerce and La Crosse County Historical Society. He makes moments for “woodworking, fly fishing and grandfathering” to replenish himself.

And now? Having a “closer relationship with FSPA” (including his contact, Sister Mary Kathryn Fogarty) is what Joe is looking forward to, as an affiliate, “the most.”