“When we walk out of this chapel, the FSPA will be very different than when we walked in. And that’s because this woman vows herself to our way of life in the church and in the Franciscan way ... giving it her whole heart for three years. Today, we have another sister and her gifts and talents will be our gifts and talents. For that, we have much to celebrate.”

Sister Cecilia Corcoran shared those words during her reflection at the celebration of first vows for Sister Laurie Sullivan held May 31 in Mary of the Angels Chapel. She described it as an act in a play; a play in which the first act took place for Sister Laurie in Northern Michigan, “ ... plowing through the stages of her early life during long winters while finding her path that drew her deeper and deeper into the following of Christ.” 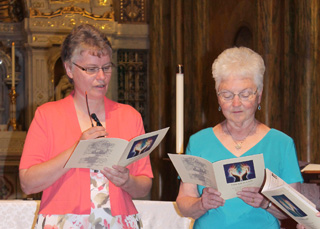 Listening to her call brought her to the second act, “ ... the incorporation process, or choosing to walk with us in this expression of religious life.” And of her profession of first vows, Sister Cecy said, “We’re moving into the third act. The Gospel again says those who come to me listen and act. So as she takes vows today, she pledges to FSPA but is vowing to God. And it is a vow that we all witness with great love and respect and support.”

And, in a way of describing what could be the next act, Sister Linda Mershon offered, “Sister Laurie, you have made your special place in the FSPA community and now you only have to live further into that place. As you do that in the years to come, may God be your beacon, your support and your constant companion.”