Pair of FSPA centenarians celebrate with family and friends 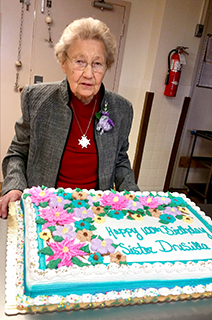 Sister Drusilla, who turned 100 on Dec. 30, remembers, while serving away from La Crosse, spending 16 summers at the Villa. “I really enjoyed it … experiencing God’s creation and loving the freedom of the outdoors.” She was charged with the postulants and also served in the kitchen and garden. She speaks fondly of sledding on a homemade toboggan and visiting the grotto; of fun in the evenings, special day picnics and even a morning breakfast at Puffing Billy, a valley overlook spot in the Villa woods. “We hiked all the way there to realize we’d forgotten the pancake dough!” Sister Drusilla points to where the cows, pigs and chickens were kept; tells of sowing corn, picking grapes and extracting honey. “It’s changed quite a lot since then.” From her bedroom window she marvels at the organic garden Sister Lucy Slinger manages today—such care of creation that in turn provides astonishing bounty that grows in abundance with each harvest. 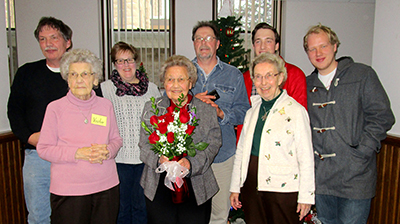 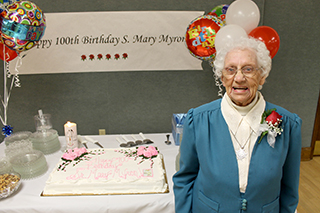 There were two tables of celebration for Sister Mary Myron, who turned 100 on Jan. 30 and celebrated at St. Rose on Jan. 29. The day started at the table of the Lord, Mary of the Angels Chapel where she celebrated Mass surrounded by FSPA, family and friends. As Father Richard Tulko said, at this table Sister Mary Myron “expresses that the Lord is the essential part of everything she does.” The second table: in the St. Rose dining room for a celebratory gathering. The meal, catered by Stork Catering Service out of Lidderdale, Iowa, owned by Sister Mary Myron’s family members, was carefully planned and included “Sister Mary Myron’s salad”—cottage cheese on a bed of lettuce, as well as Iowa ham and corn and Wisconsin cheese and crackers. 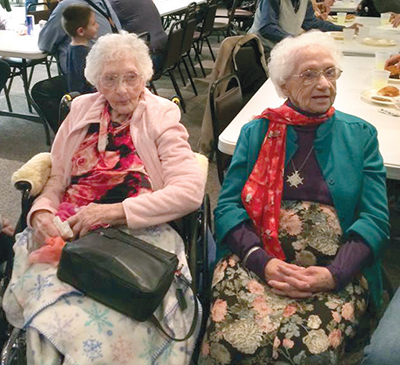 Sister Mary Myron was then swept away to Breda, Iowa, where family gathered again on Jan. 31 to celebrate the centenarian. The guest list included her older sister, 103-year-old Julie Stork.

To honor both sisters, trees will be planted in their names this spring on Villa St. Joseph grounds.