Six new affiliates, one in prayer, the others in covenancy, recently joined FSPA.

Bill Brendel
“I am drawn to be a part of this,” says new prayer affiliate Bill Brendel. He has known FSPA since they taught him from elementary through high school in Genoa, Wisconsin. “They were very instrumental in both my faith formation and preparing for life.” And 17 years ago, when he moved to La Crosse, Wisconsin, he found himself pulled to FSPA again. “We were able to re-establish relationships with many different sisters.”

Between high school and present time, Bill drew from the inspiration of his FSPA teachers to become an educator himself. With a bachelor’s degree in education from the University of Wisconsin-La Crosse and a master’s in training and development from the University of Wisconsin-Stout, he went on to be an agribusiness instructor at Western Wisconsin Technical College (now known as Western Technical College) in La Crosse and dean of industrial technologies there as well. Ministerial nudges have led him to volunteer as a eucharistic minister, lector, church choir singer and board member at Place of Grace. His family includes wife Elizabeth, four children and 11 grandchildren. His contact is Sister Ladonna Kassmeyer.

Bill’s affiliation, he says, will help him feel grounded. “I believe in FSPA and what they do and stand for ... that affiliation will help me to communicate with Jesus through everyday living.

Rose Kasprzyk
About a year and a half ago, says new covenant affiliate and La Crosse resident Rose Kasprzyk, “I came to know [another new affiliate] Ashley Skoczynski, who had such an excitement to serve other people and a love of God.” That elation was infectious for Rose who chose to be an affiliate “for prayer and to listen to God for ways I can serve, pray and meditate.”

That elation and inspiration surely came from her ministry as well. A La Crosse resident whose affiliation contact is Sister Mary Bates, Rose is a member of a social justice committee at Roncalli Newman Parish (where she prays, sings and participates in liturgical prayer), a volunteer at the winter warming center and supporter of the AAUW Art Fair on the Green. A certified accountant, she has worked as a support staffer at The Parenting Place and as an executive assistant at Wisconsin Senior Employment’s Workforce Connections Program. 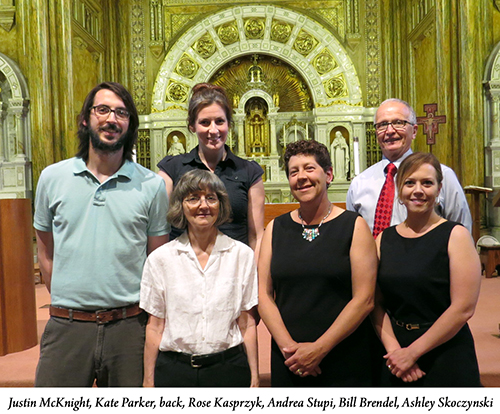 And now, “knowing I can be part of affiliation and FSPA,” Rose is eager to be with “like-minded people who share their love for God and are dedicated to service.”

Justin McKnight
In practice and philosophy, says new covenant affiliate Justin McKnight, “Franciscanism was already in step with my beliefs about the ideal nature of a person’s relationship to the world. All of this, and the great people I’ve met at the Franciscan Spirituality Center and FSPA, made affiliation seem like too much of an amazing opportunity to miss out on.”

The chance to exercise his values came in 2012 when he and his wife, fellow new affiliate Kate Parker, with whom he has two children, moved to La Crosse from Pennsylvania. Justin’s principles then led him to FSC as a volunteer. And one of the people he shares his beliefs with is his contact, Sister Kristin Peters. With a bachelor’s degree from Bucknell University (Lewisburg, Pennsylvania) and  a master’s degree in teaching from Washington University (St. Louis, Missouri), Justin has been a world history teacher at Crossroads College Preparatory School in St. Louis. He is currently a program manager for Big Brothers Big Sisters of the 7 Rivers Region and is pursuing a Master of Science in Mental Health Counseling.

When asked how affiliation will impact his personal and faith life, Justin is uncertain and not sure if he wants to make any guesses. “I’m just waiting to be inspired to go in new and unexpected directions through this commitment and new relationships I will make.”

Kate Parker
“I always joke with [husband and new affiliate] Justin,” begins new covenant affiliate Kate Parker, “that everything good we’ve found in La Crosse is somehow associated with the Franciscans.” And those valuable opportunities—volunteering at the Franciscan Spirituality Center and meeting FSPA and affiliates (especially affiliate Linda Kerrigan and Sisters Kristin Peters and Julia Walsh, her contact)—have “confirmed that affiliation is the right and meaningful next step.”

Kate felt “called to balance the structure ... practice;” and this has led her to seek a lay order. It’s also an extension of other missions like achieving a Master of Arts in English literature from Lewisburg, Pennsylvania’s Bucknell University and Missouri’s Washington University in St. Louis (from which she also has a Ph.D. in English and comparative literature) and working as an editorial associate and adjunct English department faculty member at Bucknell. Currently, the mom of two children is an assistant professor of English at the University of Wisconsin-La Crosse (specializing in 18th century British and European literature and gender and sexuality studies), a volunteer at FSC and a convener of the Sustainability Initiative at Cathedral Elementary School. As Kate begins to process through affiliation she feels “honored to have a place at the table. I’m really excited to start the journey and explore how my commitment to the Franciscan order will enrich all aspects of my life.” Not entirely certain of the shape affiliation will take, Kate is hopeful she’s asking “all the right questions.”

Andrea Stupi
Movement within social causes, and sometimes making the motion to begin with, initially caught her attention. “Fearless dedication to living the Gospel” then gained her reverence. And the new neighbor she met when moving to Holmen, Wisconsin, in 2002, affiliate Marilyn Pedretti, sealed her affirmation to serve as a covenant affiliate with FSPA. She is Andrea Stupi.

Andrea herself is a mover in the field of medicine and a devotee of the Gospel in her parish. She holds a bachelor’s degree in biology (and postgraduate experience in micro-biology) from Ohio’s University of Akron. Among other things, she has conducted cystic fibrosis research (primarily of hypertension regulation) and worked as program manager of a contract pharmaceutical research firm. She is a married, stay-at-home mom of two children and a master gardener who serves Holmen’s St. Elizabeth Ann Seton Parish on the parish council and Faith Formation Committee and also as an extraordinary minister. She volunteers at a food pantry and the Winter Warming Center and has distributed books to the homebound through the La Crosse Public Library.

And she’s ready for action with FSPA. “There are so many ways to bring the Gospel to the world. Affiliation allows me to be a small part of the community’s great good ... and that’s an honor!”

Ashley Skoczynski
While earning a Master of Arts in Servant Leadership at Viterbo University in La Crosse, she “often heard about the sisters.” Now, new covenant affiliate Ashley Skoczynski has taken the experience of her Franciscan education and the interest FSPA piqued in her to join the program “to grow in my religious and spiritual beliefs.”

Also stirred “to learn more about mind/body medicine and various healing modalities,” Ashley holds a certification in Usui Shiki Ryoho Reiki (second degree) and credentials of ministry from Universal Life Church. She also earned a bachelor’s degree in educational studies and sociology/anthropology from Ripon College in Ripon, Wisconsin. A La Crosse resident, Ashley’s gratitude of and connection to Franciscan spirituality continues to move her. “I have greatly enjoyed getting to know Sister Jean [Kasparbauer, her contact] and learn from her wisdom. She is an inspiration to me and has positively impacted my life in countless ways.”

And so Ashley yearns to acquire even more knowledge of FSPA, of Francis. “I am choosing to be an affiliate because I love learning about the Spirit and continuing to define and reflect on this human journey.”