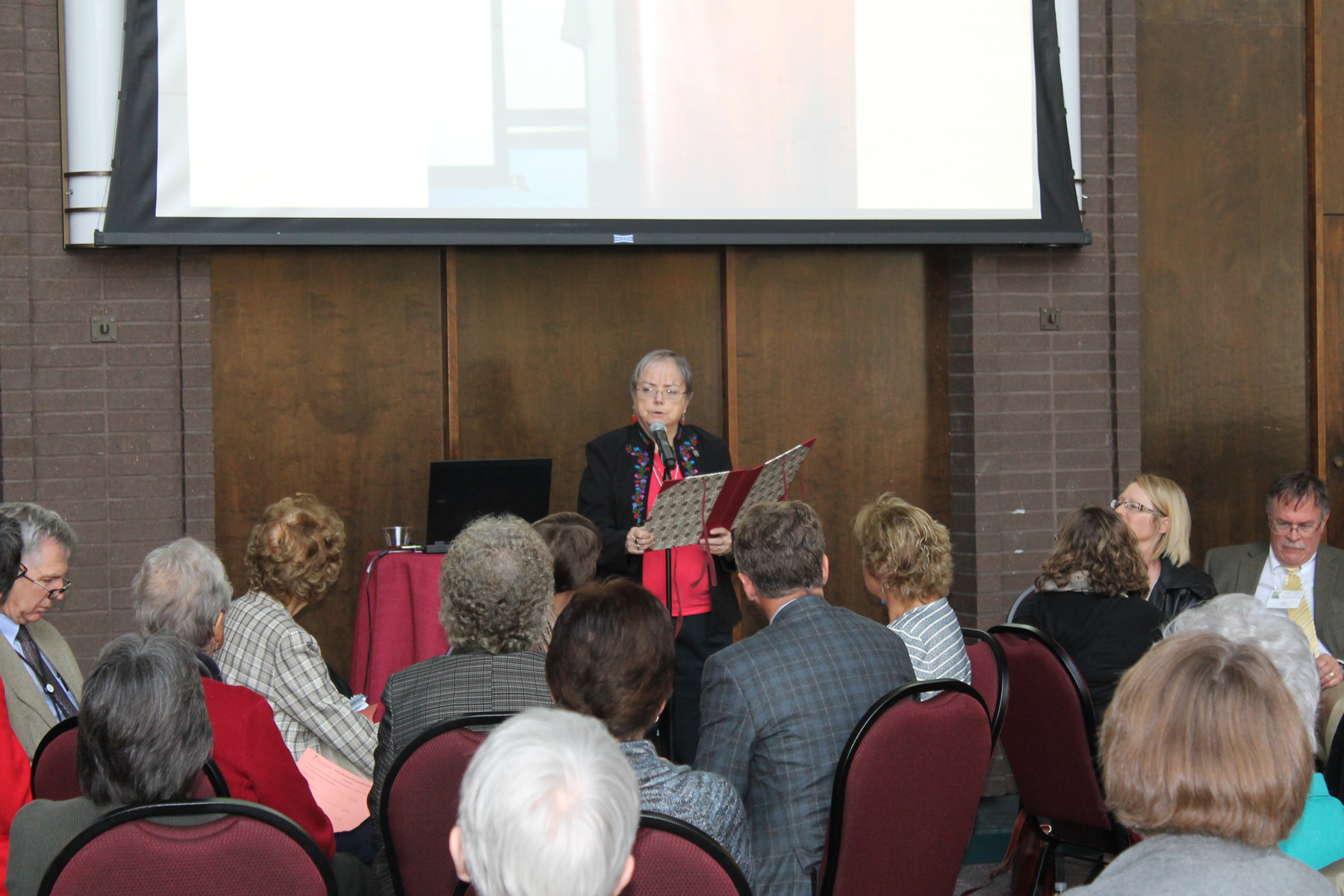 They came from Marywood Spirituality Center; Mayo Clinic Heath System-Franciscan Healthcare; Villa St. Joseph; Prairiewoods Spirituality Center; Viterbo University and St. Rose Convent. Many were pilgrims who—from Assisi, Italy—came back infused, invigorated and inspired by the quintessence of Francis and Clare. They came back and embodied the saints’ spirits for their patients, their students, their retreatants, their coworkers. They are good stewards, good people of these FSPA-sponsored institutions who gathered at the 25th Annual Sponsorship Conference on Friday, Oct. 31, at Viterbo University’s Fine Arts Center.

“Thank you for all you do in your institutions to spread Franciscan values and FSPA mission to the world. We count on you to do that,” Sister Karen said. She overheard one attendee greet friends from other ministries and remark it felt less like a conference and more like a family reunion. “That’s the Franciscan joy; like Francis bringing his brothers together from all parts of the world.” She issued a challenge “to little but important things” like greeting a staff member you may not often see; becoming vulnerable to and forgiving of each other; and joking and laughing together every day. In doing so, said Sister Karen, “You will be a beacon to everyone searching for light, shining with Franciscan joy throughout your institution.” 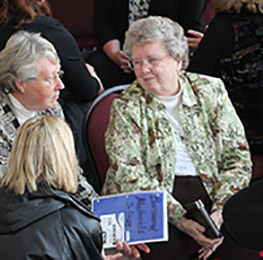 Theologian John McHugh, Kwik Trip, Inc.’s director of corporate communications and training who speaks on purpose in business throughout the Midwest, was the keynote speaker who did just that: radiated Franciscan joy that “is not only a Franciscan value, it’s a Gospel value.” John expressed, through storytelling, five such joy-filled, Gospel written Franciscan theologies to embody in all FSPA-sponsored institutions and the keys to unlocking their ministerial values: joy in purpose, joy in love, joy in gratitude, joy in detachment and joy in resurrection.

Joy in purpose
“What is purpose?” he began. “In corporate America, good companies ask that question.” Promoting principles by price is “an empty purpose.” John once felt he’d instilled purpose for the greater good after giving a presentation to the management team of the Fond du Lac, Wisconsin, company Mercury Marine. “Cute stuff,” replied the head engineer, “that doesn’t apply to me.” Then John shared his precious ties to Mercury: that his father “who always seemed to be frustrated with life and filled with a bit of Irish temper … would get joyful, almost giddy,” taking his family on the water in his boat powered by a Mercury Marine motor. “I want to thank you for what you did for my family.” Teary, the engineer expressed gratitude as well. He found he’d had a hand in someone’s joy. “He found his purpose.” 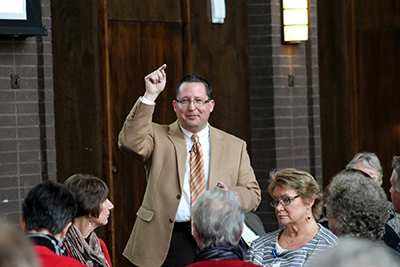 Later John gave, as a corporate communicator to the leaders of Franciscan institutions in the audience, the key to joy in purpose. Kwik Trip’s mission isn’t selling “gasoline and hot dogs … it’s to make a difference in someone’s life.” Celebrating goodness at work generates more goodness, he said, upping the realization of purpose for everyone.

Joy in love
“That’s what the cross is about,” began John, theorizing that joy is found in love. “It’s a sign of love, radical love transforming of love.” He told another story—of a Baptist minister, in the 1960s, steeped in servant leadership of social justice and the recipient of death threats for his cause. He awoke to a note from his wife: “I’m sorry Honey, but I have to do this,” which translated, to the minister, that she’d left him to escape the turmoil in their lives. When she later came home it turned out she was certain someone had planted a bomb in his car, that she drove it away, sacrificing herself, to save her husband, to honor her vow of marriage to “give you the best of everything in my life, including my own.” With “such unconditional love” as you receive in baptism and transfiguration, “you can do great ministry. “That’s what Francis plugged into … knowing intimately that the Lord Jesus loved him so deeply that he died on the cross for him.

“God’s love,” reminded John, handing over the keys to joy in love, “endures forever.” Having witnessed meetings as a board member of some of the FSPA institutions he said “The love and passion of what you do is incredible.” To those who say the wrongs they’ve done negate this, he said “It’s Franciscan theology: each one of us is inherently and innately good. God’s love cannot be erased.” 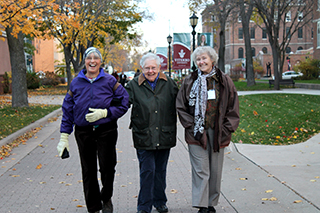 Joy in gratitude
Francis--in his joy--was so content that circumstances in his life that didn’t look or feel like gift “were still gifts from God,” said John. “And he always prefaced this as ‘And the Lord gave me. And the Lord gave me. And the Lord gave me,’” even in his blindness through which, in prayer, he envisioned and sang Canticle of Creation. He wrapped another story with gratitude, one about his 26-year-old self, accompanying his grandmother on a cruise. A trip “she’d saved up her nickels and pennies and dimes for.” It was, unknowingly, a honeymoon cruise: one that he endured and put out of his mind when he got home, failing to send a thank you note, seemingly ungrateful to his grandmother. “And the Lord gave me,” he repeated again three times. “If you approach everything in life from gratitude, joy sets in.”

According to John, the key to joy in gratitude must be turned in intervals. He cited a study in which listening to music is more satisfactory when there is that 20-second lag between songs; when you watch your favorite television shows each week instead of binge-watching the entire season; when you fast during Lent. Celebrate gratitude for impactful relationships—for those not present in your daily life.

Joy in detachment
“Franciscans, they know about detachment,” said John. “There’s an interesting illusion to detachment as a Gospel value.” From Matthew he recounted “the infancy narrative, the Christmas story” of the gifts the wise men brought to baby Jesus including myrrh, used for burial. It was “a premonition that this true king would sacrifice his life.” Even so, “It’s in the letting go,” in detachment, “that the deep joy is found. Those things in life that we try to hang on so tightly to … can strangle us.” It’s a lesson he learned at the age of 16 from his 14-year-old sister. He sulked solid for two weeks over broken promises of his getting his own car (a 1968 Camaro, no less) until his sister proclaimed “I’ve had it with you. In a couple years that stupid car will be rusting, rotting, and at the rate you’re going so will all your relationships. She got it,” said John--the value of detachment.

In the end, when Francis turned over his key to his brothers, he found such joy in detachment. “It’s tough. Francis went through a depression but ultimately God said ‘You started this but it is mine.’” He directly addressed the FSPA. “Sisters: the reality is, with aging and fewer numbers, there has to be some letting go. Don’t let it strangle you and your relationships with others. Letting go leads to greater joy.” 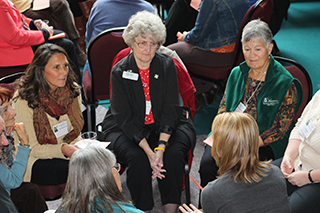 Joy in resurrection
The reason why Francis was able to refer to death as Sister Death? “He knew joy is found in life realizing there are things on the other side.” That was not what he told a third grade religion class in Italy where he taught years ago as a grad student, stating instead “If there’s nothing to be found on the other side of life, I’m fine with that.” This gamble cost him the respect and admiration of a student who, John later learned, had lost his parents in a car accident. During John’s lecture the child repeatedly opened his desk, looked inside, and shut it again. He was looking at pictures of his parents. “He needed a resurrection.”

John quoted a Protestant theologian who holds a key to joy in resurrection: “’We laugh in the face of death. When I found the church that could turn it into a celebration I knew I was in the right church.’’’ Francis believed in the resurrection and knew that “none of our stories end that way.” There’s joy “when you believe that.”