FSPA, affiliate work to alter course of consciousness and acceptance of mental illness

For much of their professional lives, two women have seen the five signs. Long before Change Direction first called us to care for those struggling with the onset of a not-uncommon health condition they were recognizing withdrawal, observing agitation, sensing hopelessness, identifying personal-care decline and comprehending changes in personality.

For Sister Kristin Peters, such discernment began in 1993 when she worked with people experiencing homelessness and then with adults with developmental disabilities and mental illness, a ministry of healing and health she continues today. She also provides support, presence and prayer to those incarcerated at the La Crosse County Jail and the homeless women living at Ruth House,
a place for transitional housing. 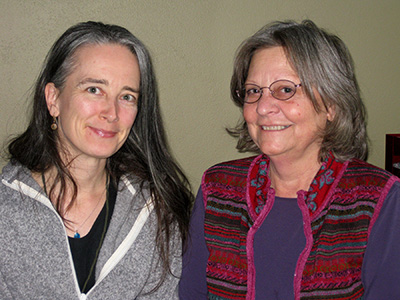 Deb and Sister Kristin both know that to help Change Direction, a national campaign to raise awareness of mental health, is to stifle stigma.

“If I have diabetes is anyone going to respond with an ‘Oooh’?” questions Deb of the identity of an illness that’s a condition of medical science, just as insulin deficiency is. It’s on the same “continuum of health” says Sister Kristin who, in her graduate school studies at Viterbo, conducted research about reducing the judgmental phenomenon shrouding mental health. “We know that talking about mental health is important to reducing fears, to familiarize,” says Sister Kristin.

And the means to become more comfortable with mental illness isn’t to change the term “mental health.” Deb questions if “calling it something else” qualifies it as acceptable. “Let’s change the name? No. Let’s change people’s perspectives.” Such reception, she says, goes both ways. “We forget that the negative perception comes not just from society as a whole but also the individual experiencing mental illness. The acts of having to admit there is a problem and then asking for help are two of the hardest things people do in their lives.”

Deb and Sister Kristin both know that to help Change Direction is to start a nationwide conversation.

That discussion began in La Crosse, Wisconsin. “I’m fascinated that the campaign started here,” says Deb who cites both the American Psychological Association and American Counseling Association as having “publicly announced support and willingness to utilize some of that information so we’re speaking a similar language.” It’s a first step; “an extremely important first step.” That APA and ACA jumped right into the Change Direction movement is very significant to Deb, who asserts that to increase awareness in such a strong, wide current is “to have messages that repeat.”

Sister Kristin and Deb both know that to help Change Direction is to inspire social support.

“The goal is to increase the community’s sense of connection and belonging in La Crosse. Whatever we can do to foster individuals’ sense of value within our families, our work environment, our friendships, our social circles,” says Sister Kristin, “is important.” Encouraging “the spirit of collaboration” and increasing avenues of outreach in our neighborhoods “could be met by having places where people gather and listen to one another, engaging in activities that promote partnership through common mission.”

Deb and Sister Kristin both know that to help Change Direction is to follow FSPA’s lead.

“Clearly La Crosse has more resources than other places and one has to wonder how much of that has to do with FSPA—the fabric of this community. They’ve always provided a model,” like the Franciscan Hospitality House, says Deb. “How wonderful and novel it is that people can go there to do laundry and take a shower.” It’s another open door through which to enter conversation. “The more we
can reduce stress and increase positive support, the more we’ll do for the health of our community.” And her relationship with FSPA, as an affiliate, helps to fortify her own strength, especially “when sometimes I think ‘Goodness  ... this is too much.’”

Sister Kristin talks about other FSPA causes on the social justice spectrum like working to eradicate human trafficking; acknowledges AMOS as a voice for those in need; speaks to the Franciscan value of Viterbo as an institution in which she learned to “ask new questions I don’t think I had before.” And she quotes the university’s chaplain and director of campus ministry, Father Conrad Targonski, as saying “Mercy is the willingness to enter into someone else’s chaos.” As an FSPA, she says “I’ve been gifted with the time and support and education to recognize the value and beauty of people in different community settings that have needs or want to be in relationship. It’s a gift—to share life with others,” to perhaps “provide some light and compassion when encountering chaos.” And we all do, says Sister Kristin. “It’s part of life.”