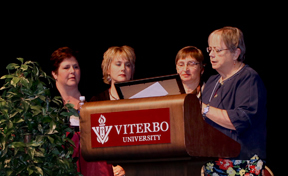 Beauty in the Franciscan tradition. Sister Jean Moore expressed that sentiment as she welcomed the nearly 200 people who gathered for the 24th Annual Sponsorship Conference at Viterbo University’s Fine Arts Center on Friday, Nov. 1. Calling forward the keynote speaker, she greeted him and his heart of hearts for the Franciscan tradition of social justice. That heart, she said, “expresses itself through art.” And that heart beats inside of Order of Friars Minor Father John Quigley—a renowned speaker, a pilgrimage leader to Rome and Assisi, a scholar of John Duns Scotus, and a celebrated artist. 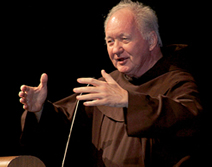 Beauty in the strong hearts of FSPA. As Father John took to the stage, he expressed such honor to speak of their splendor; of their “hundreds of years of experience”; of their “ ... integrity as women who started this community years ago”; and of the beatific relationships they share with their sponsored health care giving, education growing and spiritual guiding institutions.

Beauty and the Franciscan world mindset. It makes sense, Father John said, that we think of St. Francis for his “love of animals, his love of nature, his love of the Canticle of Creation.” However, “I think it’s important that we go into a deeper understanding, especially those of us who have the responsibility of administration and leadership and counseling and caring within Franciscan institutions. It’s up to us to bring a deeper appreciation into our ministry so that it will shine through and be of service to other people.”

Beauty in St. Francis, his followers and European artisans. Father John spoke of it, of the many glorious layers of love and joy and freedom perpetuated by him in Clare and his brothers, through their energy. He expressed it in the artists who flocked to his tomb, depicted his elation in the basilica and created artifacts “that showed a human Christ. Many other women and men began to appreciate not only Francis but ... the liberation he gave them in terms of our understanding of who God is.” 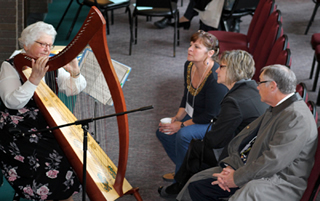 Beauty in the diversity of brotherhood. They each perceived who God is through their own mind’s eye: by the aristocratic, architecturally-minded St. Thomas Aquinas whose “understanding of God is that God is the divine architect of the universe,” and John Duns Scotus who saw God as “the big, great divine farmer who loves to get his hands dirty.” Scotus believed, said Father John, that God creates everything individually. “Every hair on your head is there because God is loving it in its existence right now ... He deals with each of us with love and care, which we call parental care.”

Beauty in Trinity. Within the arms of God’s parental care Scotus felt, quite simply, “... is love. God loves and wants to love more and so what God does is create something more to love.” We are but a “passing moment” in creation, in the universe, “and because we have that passing moment we become a permanent part of his expression of love.” When two people—expressions of his love—give themselves over to that love it comes out “in the holy breath of God ... What you have is like a nuclear fusion of three persons in infinite, permanent love together. This is a mystery, what Francis is trying to speak about when he’s giving this litany of praises of God. You are three in one Trinity. You are you because God is so amazing.” 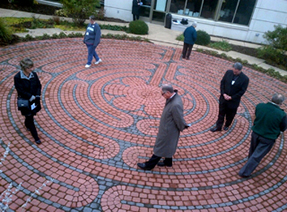 Beauty is creative, never possessive. While we are who we are because we’re God’s incredible creations, “God doesn’t own anything.” He asked the audience about Pope Francis, about the implications of his namesake. “What would it mean for him to be Franciscan? Probably simplicity, community, fraternity, brotherhood.” Concern for the environment and the poor ... “and along with that, the free ... our poverty is not just saying this is not mine but poverty is making a decision not to cling or to possess anyone or anything.” Francis made this discovery and had “a deep understanding of what it meant to live without appropriation, without ownership,” and Scotus saw “a God who expresses love but never possesses the other; that they allow each other to be perfectly free in this union and so what we find is that our Franciscan way of life, of thinking, is really Trinitarian.” 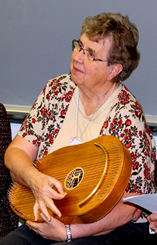 Beauty in the simple privilege of his gifts. Father John painted vibrant images of grandparents of the world who, now unencumbered with moment-to-moment responsibility for a child, “can just watch, enjoy and soak up the fruit” of their grandchildren, of their gifts. He portrayed another pleasure, that of a tomato: magnificent, ready to pick from the garden, large enough to slice and eat for a meal. “We as Franciscans have the privilege of trying to be simple ... we understand this tomato is gorgeous and ripe; it is here temporarily as a gift; and it is held in existence,” said Father John. “As I gaze on this tomato, God is conscious of it at the same time. We’re both thinking of the same tomato.” He then spoke of a dinner experience he had in Italy, prepared and served by six men, communing in a Franciscan program for addicts of drugs, pornography and other compulsions, waking and working in the garden and creating simple, splendid meals. It was said then, of such hospitality, that it’s our responsibility “to tell us and show us that beauty is God and that it is a gift we have to share. He spoke of the Franciscan way of preparing food, that everything that’s giving life is shown respect.” And so beauty is the central focus of the lives of the six young men, Father John said, who “taught me a lot about Franciscan living today, in this concentrated way.” While they have this privilege, he said, “We could never do it in our society.”

Beauty in FSPA’s sponsored institutions. Ending his presentation to the many people whose work and faith FSPA has the honor of supporting, Father John again reflected the beauty of Pope Francis: “Rather than speaking of the many issues we are concerned with, he chose the great joy and love for being with some of the poorest and most wounded people in society. So, with the consciousness that wants to know ‘Is this going to work, is the Franciscan spirit really mindful of the way of running an operation today?’ I’d say, this man has shown us ... that it does work. And it does reflect the community, fraternity, free will and astounding beauty of God. May that beauty be the guide and center of your lives,” said Father John, “always.”