Collaborating through continued exchange of ideas 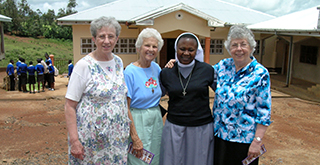 In February 2018, FSPA and the three other communities comprising the Franciscan Common Venture gathered in Assisi, Italy, to celebrate their 20th anniversary and to envision a way forward.

Themes of gratitude, empowerment, and transformation were woven into the event at the Assisi meeting, the place of origin where in 1998 the congregations found themselves being called into a mutual relationship. A structured relationship has guided the Common Venture through the years. The group now proposed a new way of collaborating through a continuing exchange of ideas, insights, experiences and liberal consultation with one another. Recognizing that the fruits of the relationship can never be forgotten nor exhausted, the sisters decided to conclude the formal aspects of their common mission and live into the future by “setting their sails to the ever-blowing winds of God’s grace,” as articulated by Sister Maria Theresia Oberwalder, TSSF general superior.

As of July 1, 2018, the structured features of the Franciscan Common Venture ended. A fund developed over the years for the education of the sisters from Cameroon is now held by the FSPA Development Office in La Crosse.