As a religious congregation with a history of administering a Native American boarding school during the era of “assimilating” Indigenous children into Euro-American culture, we — the Franciscan Sisters of Perpetual Adoration — mourn the ongoing pain and intergenerational trauma experienced by Indigenous communities since the beginning of that time.

We extend our prayers and sympathy to the Cowessess First Nation, the Tk'emlúps te Secwépemc First Nation and the Ktunaxa Nation as they discover the unmarked mass graves of children near former Indigenous residential schools in Canada. We denounce the federal policies and church doctrines that were used to forcibly separate children from their families and regret any actions we may have engaged in by complying with such practices. We are praying, learning and acting with those who grant us the insight and courage to enter into a mission of truth and healing.

Our first steps on this path toward truth and healing include increasing awareness of our participation in systemic racism during that time in history, becoming members of The National Native American Boarding School Healing Coalition and contributing our archival records to the organization’s online database resources center. Our truth and healing work — which includes studying more deeply our own history and impact at St. Mary’s Boarding School in Odanah, Wisconsin, from 1883 to 1969 — intersects with our commitment to dismantling our own racism.

Our hope is that as we engage our own discomfort by listening to the painful and tragic experiences of Indigenous communities, we can take action in dismantling systemic racism and white supremacy in ourselves and our areas of influence. Our call is to address our complicity in unjust systems, both historically and now, and strive to enhance dignity and wholeness to those who have suffered for generations. 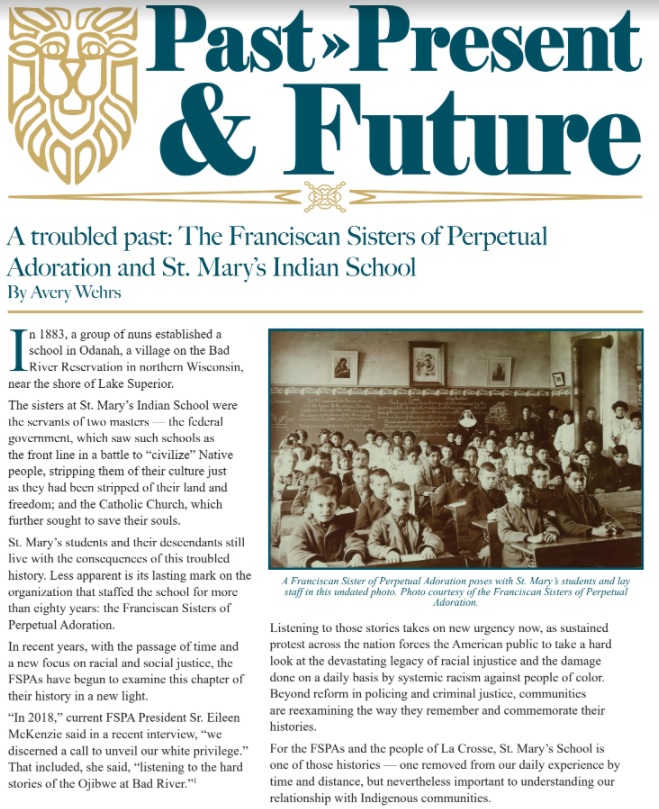 FSPA has engaged with the community in study of our former ministry at St. Mary’s Boarding School with the La Crosse County Historical Society. “For the FSPAs and the people of La Crosse,” reads an article published by the society, “St. Mary’s School is one of those histories removed from our daily experience by time and distance, but nevertheless important to understand our relationship with Indigenous communities.”

FSPA is a member of The National Native American Boarding School Healing Coalition. NABS mission is to pursue truth, healing and reconciliation to address ongoing intergenerational trauma from the U.S. Boarding School policy and to support community-led healing. As members, we are studying our role and learning how to create a path toward reconciliation — a path toward leaving a legacy of healing.

As students engaged in learning our history, we've built an online resource library of articles, webinars and other events.

The School Days of an Indian Girl
"THERE were eight in our party of bronzed children who were going East with the missionaries. Among us were three young braves, two tall girls, and we three little ones, Judéwin, Thowin, and I. We had been very impatient to start on our journey to the Red Apple Country, which, we were told, lay a little beyond the great circular horizon of the Western prairie. Under a sky of rosy apples we dreamt of roaming as freely and happily as we had chased the cloud shadows on the Dakota plains. We had anticipated much pleasure from a ride on the iron horse, but the throngs of staring palefaces disturbed and troubled us. On the train, fair women, with tottering babies on each arm, stopped their haste and scrutinized the children of absent mothers. Large men, with heavy bundles in their hands, halted near by, and riveted their glassy blue eyes upon us.

I sank deep into the corner of my seat, for I resented being watched. Directly in front of me, children who were no larger than I hung themselves upon the backs of their seats, with their bold white faces toward me. Sometimes they took their forefingers out of their mouths and pointed at my moccasined feet. Their mothers, instead of reproving such rude curiosity, looked closely at me, and attracted their children's further notice to my blanket. This embarrassed me, and kept me constantly on the verge of tears." Read "The School Days of an Indian Girl."

The Wellbriety Journey to Forgiveness

This is an extremely powerful film produced for truth-telling and healing by White Bison. It is difficult to watch and will bring up all kinds of emotion.

FSPA acknowledges that St. Rose Convent occupies the unceded ancestral and traditional land of the Sauk and Meskwaki, the Ochethi Sakowin, and the Ho-Chunk peoples. We understand that our organization and our city were founded upon the exclusions and erasures of many Indigenous peoples and we vow to work towards dismantling the ongoing legacies of settler colonialism. But we realize that saying this only has meaning when coupled with the development of authentic relationships and sustained action. We therefore pledge to move beyond mere words and to develop programs, policies and actions that fully embody our commitment to indigenous rights and cultural equity. We affirm Indigenous sovereignty and will work to hold ourselves accountable to the needs of our Indigenous brothers and sisters.

Our truth and healing work intersects with our commitment to awareness, analysis and action; we are praying, learning and acting with those who grant us the insight and courage to know how we can begin dismantling FSPA racism. 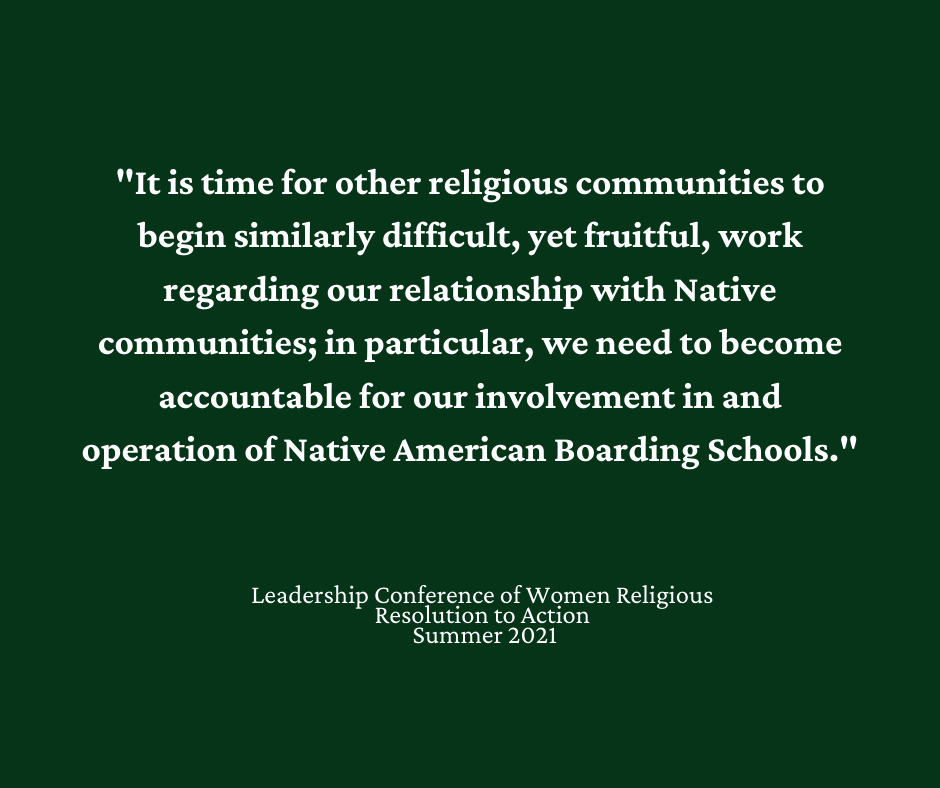