We went in unity to welcome the stranger 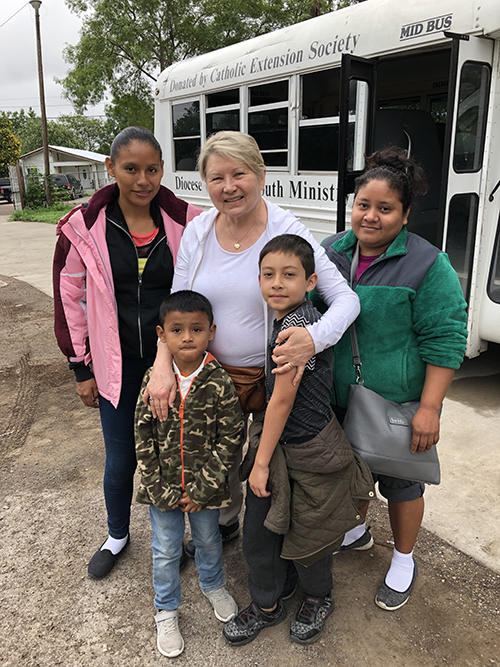 Four familiar green and white vans drove through the gates and stopped. Twenty refugees from each vehicle, many with young children or infants, slowly stepped out and onto the gravel. They inched forward with expressions of fear fixed on their faces, clutching plastic grocery bags that contained all their worldly belongings and detention papers stamped “ILLEGAL ALIEN” in bold red letters. U.S. Customs and Border Protection officers ordered them to line up outside the doors. They silently obeyed. 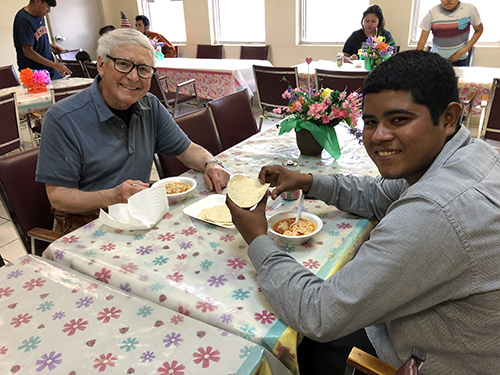 Father John Heagle and I helped process about 2,800 folks like them in the two weeks that we were at a refugee center sponsored by the Diocese of Laredo and Catholic Charities USA in Laredo, Texas. We received between three to nine vans each day. The health department screened each person before they entered the building. Volunteers gave them each a bottle of water and a sandwich and examined their papers. They were assisted with making one phone call to their sponsors, family members in the United States. Shelter staff began securing either plane or bus tickets (paid for by their sponsors) for them. Sponsorship is a prerequisite for detention center release.

In the refugees’ 24- to 72-hour stay at the shelter, they were given meals, showers, clean clothes and beds. Adults helped with cleaning and laundry. Among them were medical professionals, contractors, teachers, mothers and fathers, all fleeing either violence or drought in their home countries in Central America.

It was an enormous privilege to meet and assist these brave women, men and children.
We learned so much about human resilience through this experience. These are good people and dedicated parents with homes and jobs who did not want to leave their home countries. Successful business owners threatened with extortion or approached to traffic drugs are forced to flee. A drug lord wanted a 14-year-old girl to be his “girlfriend.” The parents refused, but her father knew "she’d be taken eventually." The family left with nothing.

We learned that this is how it is in countries ruled by dictators, those with no free press, democratic elections or law and order. It’s not murderers and rapists seeking refuge in the U.S. — they have free reign. If you support a dictator, you can get away with just about anything.

Our greatest joys at the border were taking refugees to the bus or plane, hugging them goodbye, blessing them and asking for their blessings as well. Now, we worry that they will be rounded up and sent back to inevitable violence and death. We pray for them daily and invite you to do the same. Pray, and vote too.

Why did we go to the border? We went in unity with the Statue of Liberty: “Give me your tired, your poor, your huddled masses yearning to be free …” We went because welcoming the stranger, the migrant, the refugee, are values deeply embedded in both our Judeo Christian heritage and in the founding vision of our country. We went because this edict represents an essential core vision of the Hebrew people, expressed throughout the Hebrew Bible. We went because we are commanded in Exodus, Leviticus and Deuteronomy to not molest the widow, the orphan, the stranger, the alien; because once we were all strangers and God was our liberator.