Adjusting to U.S. culture required considerable work on Sister Benigna Maihouly's part when she arrived in July 2001. Now she is contemplating a similar process as she prepares to reenter her homeland Cameroon, Africa. Describing her anticipated return, Sister Benigna says, "I have assimilated a lot. As I am going back I will be like a stranger, because I have changed, and they, too, have changed."

Sister Benigna mentions that one of her greatest adjustments to U.S. culture related to interpersonal behavioral differences. "Here, people mind their business. When I first came and encountered that, I was shocked and felt it so much." She thought people acted as if she had leprosy or had done something, because they did not acknowledge her as they passed by.

She also struggled to understand people during conversations and in her classes initially. People spoke fast, and had an unfamiliar accent. Watching television helped her with this because she could just sit and listen. Now, after three years in the United States, she takes these differences in stride. Today she is thinking about how she will readjust in Cameroon.

Her concern is not about having fewer material comforts. Instead, Sister Benigna has recognized that the way she thinks is different. She wonders what her experience will be since she has acquired new understandings of life. "My way of thinking is not as it was. I am quite different. Now I am more open; I respect certain things and I do not like to judge."

The difference in Sister Benigna's way of thinking becomes evident when she describes meaningful classes she took at Viterbo University. She cites three classes as being particularly memorable-art appreciation, a sociology class on racial and ethnic groups, and a nursing class on humor. 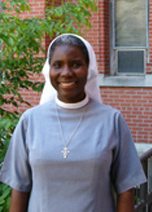 Sister Benigna Maihouly
Sister Benigna wondered why she had done so well in the art appreciation class, and decided her success was related to her enjoyment of looking at paintings and attending theatre productions. She notes that people in Cameroon are not exposed to art, or brought up to appreciate art, in the same way as U.S. citizens are. Art is prevalent in her country, but appreciation of art is not.

Sister Benigna readily recalled an experience in Cameroon where she saw the value of integrating art and healing. The Tertiary Sisters celebrate their hospital founding day with dances and drama, and patients are a part of the celebration. Sister Benigna observes that patients forget their pain for awhile during the celebration, and notes, "Joy promotes their healing."

Through her studies of racial and ethnic groups, Sister Benigna came to understand that different cultures should be respected because people do not reason or think the same way. She points out that Cameroon is made up of both English and French speaking people, and her own community is comprised of members from multiple tribes. She feels that this new recognition will help her as she attends to patients of different cultures and religions.

A broad grin spreads across Sister Benigna's face when she describes her course on humor in nursing. She says she never imagined there would be such a course. In this case, as with art, the notion is not new to her, but the appreciation and perspective were. She explains that in Cameroon, just after morning prayers, "some nurses tell funny stories and you see everybody laughing. That is humor, we do not call it that, but we use it."

Despite the adjustments she will need to make, Sister Benigna is ready to return home. She is eager to see her sisters and her family. "I know I was here to study and be with the sisters. Now my studies are over and I am anxious to go back and to put into practice what I have learned."

Sister Benigna knows that on one of the first nights after she returns her sisters will be expecting to hear from her about her experiences, and after she has spoken they will have many questions for her. Sister Benigna says she will explain that living cross culturally is not easy. But she will also say, "I learned to adapt and fit in, and I lived happily. I have been very busy with no time for being lonely." When she took a break from her studies, Sister Benigna enjoyed listening to music or watching television. Sometimes she distracts herself on the computer-she looks for jokes and has developed a big portfolio of jokes by now.

Her parents and eleven siblings will also have many questions for her when she eventually gets to see them. She knows her family will be anxious to hear about the United States since their only impressions are formed by the popular, and frequently violent, entertainment exported to Cameroon.

Sister Benigna says she has been touched by the FSPA and the way they live, their life of prayer and relations with others. "They are very concerned about people. They have been concerned about me spiritually and physically. They are always encouraging and praying for me." She plans to tell everyone about all the good people she has met.