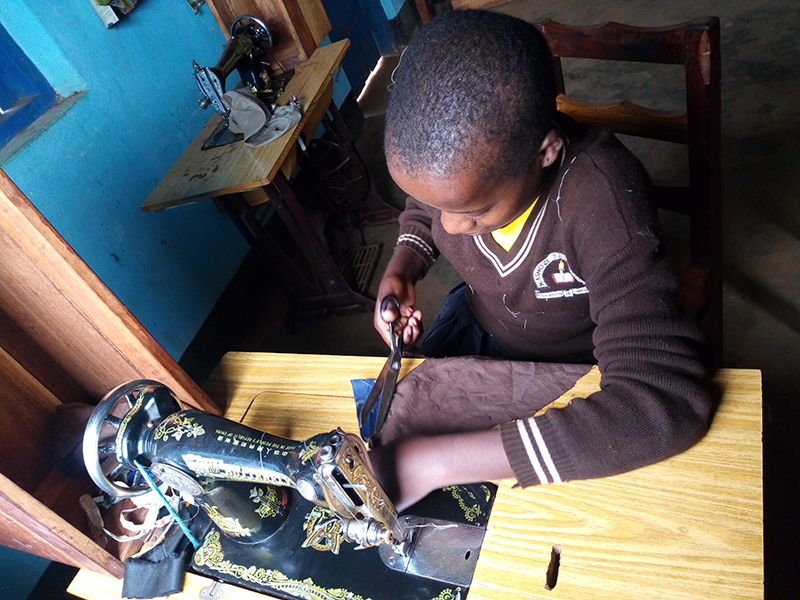 Meet Modesta (pictured above). Modesta has an intellectual impairment and struggled academically in school. She is now attending a vocational training center and achieving skills in tailoring. Modesta, say her parents, is making them proud.

Meet Juster (pictured front, right, below). Juster has a mobility impairment, has completed her secondary education but did not have the opportunity to continue her schooling. Juster also receives vocational training at the center and enjoys mastering her own tailoring skills. 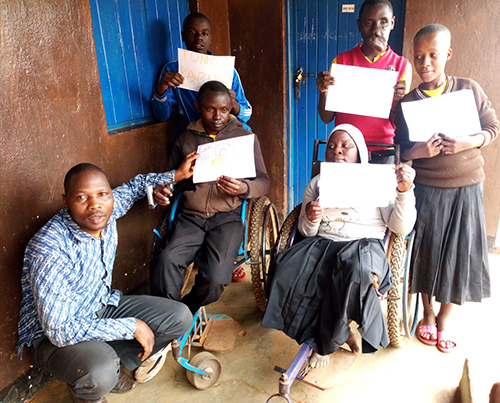 Modesta and Juster are aspiring to become strong, independent women because of Tekla. Tekla was a woman who, during her life, served children with disabilities in Dar es Salaam, Tanzania, Africa. Her work later inspired the Tekla project, a regional pilot program geared towards empowering women and girls like Modesta and Juster. The Tekla project, which began in 2001, was designed to “strengthen the situation of girls with disabilities, in respect to their position in society, educational needs and social status.”

Three years later, the short-term Tekla project was officially founded as TEKLA KAGERA, an organization whose outreach expands throughout Tanzania and is missioned according to this statement of faith: “We believe that disability is not inability. We are of strong opinion that people with disabilities were born in the image of God. They deserve physical and spiritual supports from the society without discrimination, segregation, and stigma so that they can live a good and independent life.”

To instill such value of self, to provide opportunity for personal growth and sustainability to people with disabilities, TEKLA KAGERA established Migara Vocational Training Center, the school in which students like Modesta and Juster are learning to succeed. And TEKLA KAGERA, governed by a board of 10 people that is chaired by the organization’s mobility impaired founder, staffed in part by a woman who is deaf and another who is blind, exemplifies its vision of empowering people with disabilities not just for its students, but for all in the surrounding communities as well. 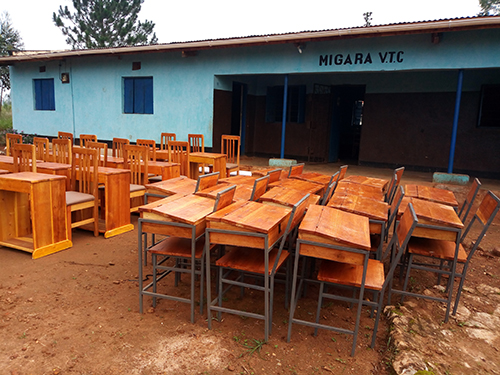 Through a ministry grant sponsored by Franciscan Sister of Perpetual Adoration Sarah Hennessey, the center and the students it serves have essentials like furniture and water tanks, assistive devices and an accessible bathroom — the fundamentals of a conducive learning environment at Migara VTC.

Sister Sarah shares a story of another remarkable, compassionate woman, Stefanie Koester, a Common Franciscan Novitiate. “She was smart, creative and full of energy.” A social worker, Stefanie eventually left her own religious community, “moved to Tanzania, started a home for disabled children and adopted two beautiful girls.” Now, 15 years later, these women remain dear friends a world apart — Sister Sarah, who ministers as a spiritual director at the Franciscan Spirituality Center in La Crosse, Wisconsin, and Stefanie, a board member of TEKLA KAGERA. I cannot imagine anywhere else, where just a few dollars makes the most impact on the lives of those who need it,” says Sister Sarah of Migara VTC.

Overseeing all things that lead to the learning of skills like tailoring, welding, carpentry, computer technology, entrepreneurship, math and the languages of KiSwahili and English is Mugisha Kasaaju, director of Migara VTC. He is also a champion of services that identify children and women with disabilities, of awareness among parents and community members, and of promotion for inclusive education for children with special needs.

Of Sister Sarah, Mugisha says, “At TEKLA KAGERA, we are very thankful to her for loving us but also for feeling empathy to youngsters with disabilities. Her support, care and love are very meaningful to us.” In deeper reflection, he says her compassion also echoes John 10:10: “‘A thief comes only to steal and slaughter and destroy; I came so that they might have life and have it more abundantly.’ Sister Sarah came to give us — especially our youngsters with disabilities — abundant life, physically and spiritually.”

“The future of TEKLA KAGERA is to stand and support the children and young adults with disabilities through Migara VTC.”