And for five days in June, a spot was reserved for Sister Laura Nettles. She set out to further her hypothesis that letters written in the 1220s, and compiled in a manuscript in 1242, focusing on St. Francis of Assisi’s second (short) Letter to the Faithful, were not written by Francis. 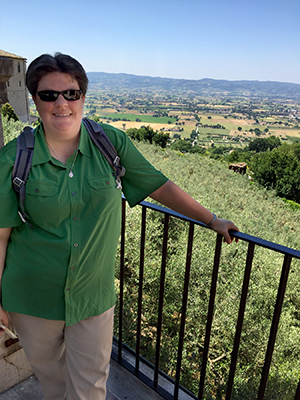 Before having access to this manuscript, Sister Laura put in hours of preparation. In what started as a project during her master’s studies at St. Bonaventure University, working on St. Francis’ letters to the faithful, she explains: “There had always been what we call the Letter to the Faithful which is accepted in the Franciscan tradition and, really, the origin of the Third Order. In 1902 a man discovered a manuscript that contained a letter to the faithful, but a condensed version. And since that discovery, scholars tried to figure out the relationship between the two letters: Why is there only one copy of the short letter? Is it something Francis wrote?”

Over the past four years, Sister Laura has been pondering these questions and decided it was time to see and study the manuscript for herself. “I got to a place where I needed to see the manuscript and not take others’ words for it.” She was awarded a Viterbo University Reinhart Ethics Fellowship and began her journey to research at the Vatican. Required documents
were filed, including academic records and reference letters from President Rick Artman and Vice President for Academic Affairs Glena Temple. Advice from scholars who had visited the library was sought. Travel plans were made.

Arriving at the Vatican, Sister Laura expected to pass the Swiss Guard, go through a series of check-in points (which she did) to enter the Sant’Anna entrance to Vatican City and find an exquisite library entrance. After using her reader’s pass to gain entrance to the library’s locker room, where she left most belongings behind—only allowed to bring a computer with its camera disabled, pencils (no erasers) and loose leaf paper—Sister Laura searched for the library entrance. As it turns out, the door to enter is simple, unmarked and somewhat underwhelming.

But the experience of being seated in a reading room of the Vatican Library and having a manuscript from 1242 placed in front of you on a stand covered in velvet—complete with wooden dowels to maneuver the pages—was when the experience became overwhelming.

She now understands why scholars stay for a month or more. “You don’t get to roam around the library like we do here. You’re pre-approved for specific locations.” Sister Laura’s access card was coded for two rooms only; the printed books reading room and manuscripts room. “You also have very limited time with the manuscript.”

Sister Laura’s research allowed her to find differences in the two letters that she would not have found had she not seen it for herself. And it was enough for her to believe that she is able to debunk two scholars’ theories: specifically, that someone else wrote the short letter. “I believe it is someone’s copy of what St. Francis said. I was able to look at the Scripture and determine that the Psalms that are used in the long letter and the short letter are from different psalters”—something she knew she would look for when she got there.

So what’s next? Sister Laura explains that she will continue digesting the information she gleaned and begin drafting her findings for Greyfriars Review, a resource for contemporary Franciscan theology, spirituality and history.

There’s far more work to be done and Sister Laura hopes to be the one to do it. She acknowledges, however, that she is entering the tough, final stages of her doctoral studies at the Chicago Theological Seminary, so after she publishes her findings from her Vatican Library research project, her focus will shift to finishing her doctoral program.

“What I found is another piece to the puzzle. It helps further a hypothesis and that’s why publishing is important. While I hope to continue with this project, I know that the added piece about the psalters could help someone else further this research.”