That’s what happened March 29 and 30, as friends came together to honor the 25th anniversary of Sister Thea Bowman’s homegoing. 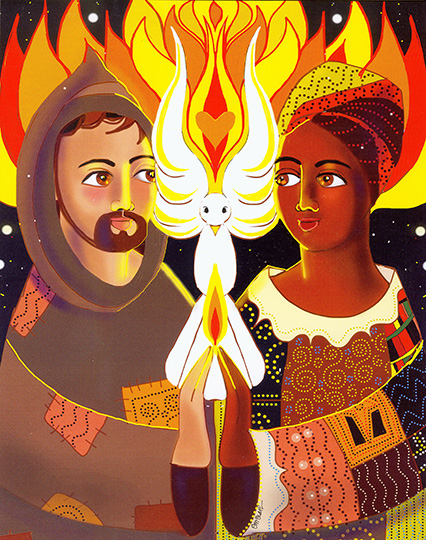 Friends of Sister Thea: Sharing the Joy
Friends and storytellers Reverend Maurice Nutt of the Congregation of the Most Holy Redeemer, Franciscan Sister of Perpetual Adoration Marla Lang, Brother Michael (Mickey) McGrath of the Oblate of St. Francis de Sales and Mary Lou Jennings, Thea Bowman Foundation founder, shared their memories of Sister Thea who came to them in different stages of their lives, and in hers. During this panel presentation, hosted March 29 by the Franciscan Spirituality Center, La Crosse, Wisconsin, more than 75 guests heard firsthand how Sister Thea affected the lives of these men and women and how they carry out her legacy today.

Sister Marla opened the panel, offering “the love FSPA poured into Canton in the 1940s touched Bertha Bowman (Sister Thea) deeply ... and during high school, she did whatever it took to become an FSPA.” When told the northerners would not like her, Sister Thea responded, “I’m going to make them like me.” And they did. According to Sister Marla, when FSPA leadership recognized Sister Thea’s gifts, they educated her through to the doctorate level. “Sister Thea passionately engaged many in wake-up calls for social justice ... in one year she spoke in 163 locations ... 163 locations ... challenging and empowering others.” She continued, “As a spirit-driven woman, she opened us to another culture ... it’s hard to imagine FSPA without Thea and Thea without FSPA.” Sister Marla’s Thea-inspired message to the guests: “Live the call to be in communion with each person’s process to become more.”

Father Maurice Nutt recalled his Thea awakening that came during her commencement address at New Orleans’ Xavier University in Louisiana: “It was a cathartic moment for me; whatever she said, she spoke to my heart. And after her address, she said ‘Maurice Nutt, you can be the best Redemptorist [priest] you can be and still be an African American.’” At that point, he knew he no longer had to try to be anything else. As her former student he said, “I don’t speak of Thea in the past tense because she’s always present with me.” He sees her as the patron saint of racial reconciliation. “She used her blackness as a bridge over troubled water. She was my spiritual mother, and you, her Franciscan Sisters, are my aunties.” 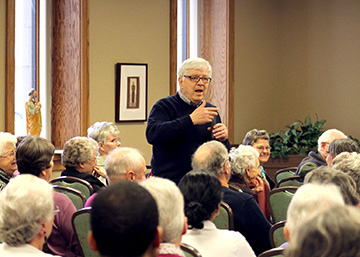 Brother Mickey McGrath never met Sister Thea, yet he declares “I have a little black nun living inside of me.” While caring for his dying father, Brother Mickey noticed a copy of U.S. Catholic on the coffee table.  As he flipped through the magazine he read, and was touched by, an article about Sister Thea. Her words “I’m not dying, I’m going home” gave him peace as he said goodbye to his dad. About a year later, ready to leave his teaching career to pursue art full time, Brother Mickey was invited by friends to view a video featuring Sister Thea. And after that, the art just flowed. It flowed out of him, right to the paper—no drafts needed. “She led me to it; it’s all about joy ... joy of the Gospel and Sister Thea taught it to me first.” His message: “Hold onto the joy, even in the darkest moments; beauty heals and brings us peace.” Brother Mickey, a Philadelphia, Pennsylvania, native and current resident of nearby Camden, New Jersey, added that when Pope Francis visits Philadelphia in the fall, “I’m pushing my way to the front with a big picture of Sister Thea!”

Mary Lou Jennings, the founder of the Sister Thea Bowman Foundation, recalled Sister Thea’s words “don’t forget the single mothers, Mary Lou.” And today, through the work of Mary Lou and her husband, Dr. Len Jennings, more than 250 African Americans—including single mothers—have benefited from a foundation scholarship. These individuals might not otherwise have had access to quality Catholic higher education and today, hold college degrees. “What Sister Thea didn’t tell me but tried to is,” said Mary Lou, “you’re going to be parents to these young people.” She added “Through the 25 years we have paid our bills because up in heaven, Sister Thea tells God ‘You gotta keep this going.’”

Homegoing Mass
“Jesus was her everything,” shared Father Maurice Nutt, who celebrated Mass on March 30 to honor Sister Thea’s homegoing. He opened his homily with Sister Dorothy Kundinger’s final words spoken to Sister Thea on March 30, 1990: “It’s OK to die ... don’t be afraid ... you are not alone. I love you. Goodbye, Thea.” 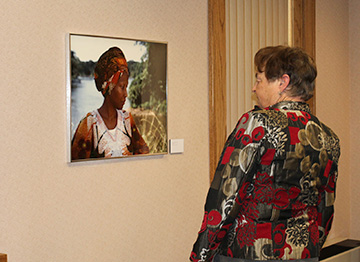 To those gathered in a full Mary of the Angels Chapel and to the 170 guests who watched live online, Father Maurice said, “Today as we come to remember Thea, there are so many attributes you could name about her as a scholar, an activist, an advocate, a friend, a companion, as someone who loved her Lord, her Franciscan vocation, the Eucharist. But I knew Thea as someone who worshipped. She was not ashamed to worship the Lord wherever she was.”

He led the celebrants through a series of wonderings he has had. “Over these last 25 years I have wondered what Thea would think, say or do about: the wars in Iraq and Afghanistan; the black-on-black violence in our country or the Black Lives Matter movement; about President Barack Obama becoming the first African American president of the United States? What would Sister Thea say about her classmate, Sister Charlene Smith, and John Feister who wrote Thea’s Song? What would she think, say or do about the Martin Luther King Jr. memorial on the National Mall in Washington D. C.?”

Thea was always with Jesus, and Thea always wanted us to give to the Lord Jesus the very best that we had. And quoting Thea, Father Nutt offered this: “Let us stretch ourselves, going beyond our comfort zones, to unite ourselves with Christ’s redemptive work.”

Like Father Maurice, we wondered: What would Sister Thea have thought about the celebration? Sister Charlene Smith, who coordinated the Thea homegoing events, believes: “Thea appreciated and loved every minute of the celebration and wants us to ‘keep on, keepin’ on.’”