Sister Helen put faith first in both nursing and teaching 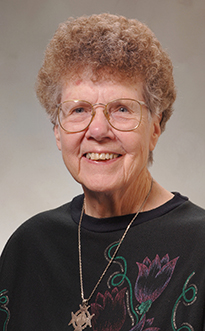 Sister Helen Keating was raised in a devout Catholic family. In fact, it was a challenge at times even for a girl who would go on to commit her adult life to Christ.

“When we thought we could sleep in on Saturday morning, my mother would call up and she’d say, ‘Girls, are you awake?’ We’d tell each other, ‘Don’t answer.’ Finally someone would say, ‘Yes, mother.’ And then she’d say, ‘Oh, well, as long as you’re awake, you might as well go to Mass.’ So I guess you would say we were influenced, but it was a good start,” Sister Helen says.

She remembers her parents, Frank and Willa, attending Mass together every morning at 6 a.m. They would return home, eat breakfast, then Frank would go to work.

“That’s the way it was every single morning. I had a very religious background; as children we went to Catholic school all the way through and I loved the nuns, so I thought that would be a good thing to do-go to the convent.”

Sister Helen grew up in Prairie du Chien, Wisconsin, the second-oldest of six children. From an early age, she hoped to be both a nurse and a nun.

“I came to the St. Francis School of Nursing after high school and was exposed to FSPA. I was so impressed with their wonderful attitude, their love of nursing, their concern for the students,” Sister Helen says. “To me, they were just ideal and it seemed to me that was the only way to go. I could be a nurse and a sister and that’s what I wanted to do.”

Sister Helen attended the St. Francis School of Nursing for 2½ years before deciding to “go across the street,” as she put it, to St. Rose Convent.

“I had talked to one of the sisters about it and she certainly encouraged me. I talked to my folks about it and they were very encouraging. So we went to see the mother general. I asked when I could come and she said, ‘You can stay now if you want to.’ I went back home with my folks, got my things packed and returned to the convent. That’s how that worked, just that fast. I was very fortunate to have that kind of cooperation.”

After Sister Helen took her final vows, she finished nursing school. That is when the real work began. For most of her career, being a nurse meant full-service patient care. A typical day started with 6 a.m. Mass before reporting to her station or the operating room by 7 a.m., working until as late as 10 p.m. She and other FSPA nurses regularly worked on-call, every day, for three years before being given a week off to visit family. 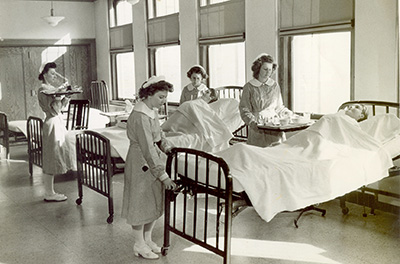 “They were very long days,” she recalled. “I loved my work and I loved the people I worked with, and if it hadn’t been for the prayer life, I’m not sure I could have gotten through some of those days. Also the other sisters, all of us were going through the same kind of pressure, especially the nurses, and I’m sure too those people working in the kitchen, working in the laundry; it was the same type of life for all of us. We worked together, we laughed—we had to sometimes—but it was the support that we got from our prayer life that enabled us to get through those tough times.”

Sister Helen worked at St. Francis Hospital, as well as hospitals in Sparta, Wisconsin, Carroll, Iowa, and Idaho Falls, Idaho. She remembers the care she and other nurses of her era offered as being challenging and rewarding.

“We didn’t have a (post-operation) recovery room at that time, the patient went to surgery from our floor and came back to our floor, so we did the post-op care. Also there was no pastoral care, so if patients were in special need of prayers, we were responsible to care for their spiritual needs along with their surgical and personal needs, and dealing with their relatives. We did so much hands-on care; surgical patients stayed for 10 days so we got close to them and close to relatives and when we discharged them it was almost like saying goodbye to a family member. It was very satisfying,” Sister Helen says.

Sister Helen, who earned her master’s degree from Columbia University (New York), moved into teaching at St. Francis School of Nursing until the school closed in 1970, and later worked in administration for FSPA. As a nursing instructor, she put her faith front and center, just as she did when she was caring for patients.

“I think recognizing the presence of Jesus in one’s vocations, I tried to do that, to see Jesus in the patients or the students, to develop that respect,” Sister Helen says. “My parents taught me that. I learned that at home and I try to do that now. I find the Lord’s presence so much more of a personal kind of experience within myself. It isn’t finding the Lord out there so much as being able to experience the presence of the Lord within, so it comes almost full circle.”