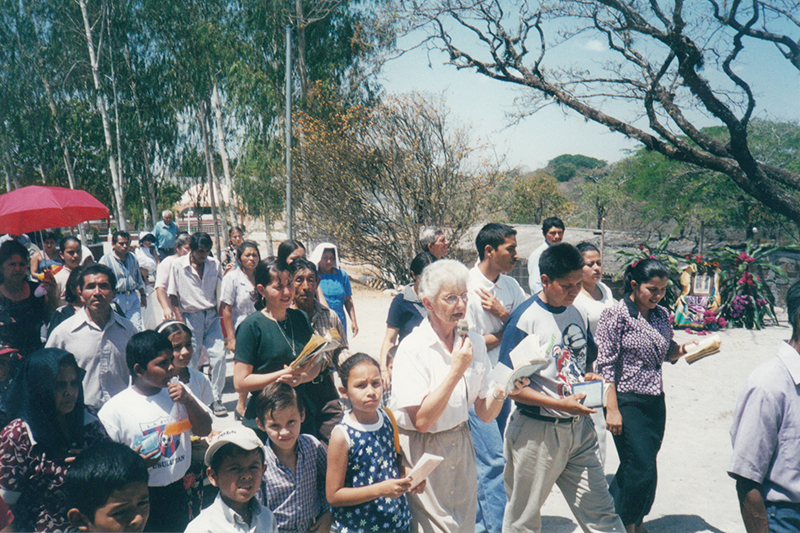 For 31 years of her life, Sister Antona Schedlo served as a missionary in El Salvador. During this time, she found herself surrounded by poverty and civil war, and even more importantly, people who were in desperate need of her help. She performed pastoral work, including baptism, communion and marriage preparation, and advocated for the poor. Sister Antona completed many assignments across El Salvador in Santa Ana, Cabañas and San Salvador. She also spent a year in San Antonio, Honduras, serving Salvadoran refugees.

Thanks to Sister Antona’s cousin, Mary Dahlke, the complete story of Sister Antona has been recorded in the book “Memoir of a Gringa Missionary.” Sister Antona was surprised when Mary offered to write the book and never thought anyone would find her life so interesting. After reading this story of a sister who left Wisconsin for El Salvador to fight poverty and oppression throughout the hardships of civil war, most anyone would understand the motivation to write this book, a book that provides the reader a greater understanding of Franciscan Sisters of Perpetual Adoration and their incredible dedication to lives of service. Below is an excerpt of the book’s rich description of Sister Antona.

Beginning in 1970, Sister Antona spent 10 years as a missionary serving the people of Santa Ana. She began as a pastoral worker in the poorest and most violent parish in the area, then as curriculum director and library supervisor at the FSPA-founded Madre del Salvador School. Eventually, she moved to Candelaria de La Frontera where she would help run the parish during the week, with the pastor coming only on weekends. El Salvador was full of people desperate for the aid of missionaries. The civil war further exhausting their resources. After increasing violence toward Catholic missionaries, Sister Antona was devastated when the Superiors ordered all FSPA to leave El Salvador in 1981. “I can’t help feeling partially responsible for their plight, because I taught them about Jesus and justice. You can’t just teach somebody something like that and then leave.”

It took six years before Sister Antona could return to her missionary work, eventually volunteering at a Salvadoran refugee camp in San Antonio, Honduras. After her four-month commitment there, Sister Antona returned to El Salvador, ministering in a large refugee center, Santa Marta. From 1988 to 1992, Sister Antona and the people of Santa Marta would experience constant harassment by the military. Desperately-needed truckloads of food and materials delivered to the camp were often sent back to the capital by soldiers. Throughout the bombings, shootings, harassment and overall terrible living conditions, Sister Antona was determined to do everything she could for the good of her community. After overseeing the construction and development of a new church and celebrating the signing of a peace treaty in 1992, Sister Antona wrote that she was “ready for a change of food, scenery, work and politics.”

Sister Antona spent the next 17 years in Oratorio de Concepción, helping people rebuild from the war and with the final goal of preparing the laity so that she could someday turn the work over to them. Had it not been for a desperately-needed knee replacement surgery in 2010 that forced her retirement, she might still be there today tackling the next challenge that faces El Salvador.

“Memoirs of a Gringa Missionary” is available to borrow from the St. Rose Media Center and the Villa St. Joseph Library.