Looking out a window high above Washington, D.C.’s National Mall almost 20 years ago, Sister Charlene Smith first spoke aloud a decision to honor her friend: “Well Thea, I guess I’ll write your biography.” Thea is, of course, Sister Thea Bowman, and Sister Charlene did indeed pen Thea’s Song: The Life of Thea Bowman. The book is touted as “the definitive, authorized biography of a modern-day heroine with never-before-seen writings, interviews and photographs.” It is also a complete compilation of Sister Thea’s spiritual life—“her impact on black Catholicism, in the FSPA community and,” says Sister Charlene, “on me.” 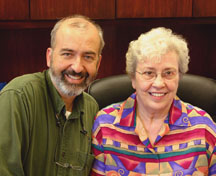 Sister Charlene, treasurer of the Thea Bowman Black Catholic Education Foundation, entered into the writing process with research while serving as coordinator of the Thea Bowman Legacy. She also sought out an editor. “I asked Thea what to do, and the thought to call John Feister came to me.” Writer and founding editor of www.AmericanCatholic.org, John is known by Sister Charlene “for writing two really good articles on Thea.” He spent two years working outside of his full-time job to compile the findings from his discussions with members of the black community, thus solidifying the story of Thea’s universal spiritual legacy.

“You can’t help but be attracted to Thea,” declares Sister Charlene. “Once people get the flavor of her, she’s irresistible.” Orbis Books, a New York publishing house known for its commitment to communicating global dimensions of Christian faith, was equally enthralled by the manuscript. “This is the best story of vocation I have ever read,” writes Michael Leach, Orbis publisher emeritus and editor-at-large. “It ties in the history of our country with the history of Thea. The details—teaching kids and college students and bishops, traveling to Europe and throughout the United States, her many kinds of writing—add up to a complete picture of a human being growing more and more in touch with herself, the world, and God.”

Pre-orders of Thea’s Song through Amazon and Barnes and Noble began last October, and Orbis is scheduled to release the book and roll out its publicity campaign in February 2010. Thus far, endorsements shine as brightly as the book’s subject. “Sister Thea Bowman was a song sung by God,” says author James Martin, SJ. “One of the most significant figures in modern Catholicism, Sister Thea was a radiant example of what happens when you let God’s joy enter your life decisively.”

More than the sum of its reception, Thea’s Song is a love story. “I enjoyed her,” says Sister Charlene, “and most everyone else she met did too.” Sister Charlene’s relationship with Thea began in the St. Rose dining room on her first day as an FSPA postulant in 1954. Their common interests—English, theater, speech and educational accomplishment—linked them together from then on.

Sister Charlene remembers Thea “as a master teacher, extraordinary with children, and a singer par excellence,” and says that Thea’s spirituality was built on black sacred song, ritual and dance. “Thea knew if she wanted to succeed as a black woman religious in the 60s, she would have to do everything we did better,” recalls Sister Charlene, and then adds, “Thea did.”

The minority status of Thea as a student of Washington, D.C.’s Catholic University further fueled her fortitude to effect change in the church on behalf of her ethnicity. Again, she used her voice. “She approached the bishops saying, ‘I come to you as a woman fully functioning in my blackness, my intelligence. You’re not afraid, are you bishops?’ I think it’s very important,” says Sister Charlene, “that people get to know her because she encouraged the Catholic Church to embrace black ritual and song in the liturgy.”

Now that Thea’s Song is playing for all to hear, Sister Charlene considers its impact on FSPA. “I think FSPA will be proud and grateful that Thea was called to be our sister,” she says. “Thea loved being a member of this community, and she loved being a Franciscan because St. Francis was full of joy and she was full of joy.”
Sister Charlene shares that elation with St. Francis, with her friend and, as the 20th anniversary of Thea’s death approaches, with the world. “When I closed the final draft of the book, I felt Thea’s joy. She is somebody who seems to be more alive in the minds of a lot of people than she was before she died.” Sister Charlene is also illumined by the glow of Thea’s love. “After she was diagnosed with cancer, Thea realized that to love is the most important thing. She loved everybody. I can still hear her say ‘I love you. I really, really love you.’”