Rejoicing in Prayer of Praise: two FSPA celebrate together in song 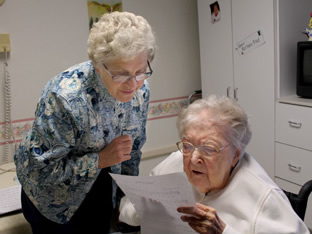 “Thou art the Holy Lord God; Thou art God of gods who alone does marvelous things; Thou art,” sang the passionate vocalist, “strong.”

“Is that the correct pitch?” asked the consummate coach, never taking her eyes off the highly-esteemed songstress in her sight. “Make ‘strong,’” she instructed, “strong.”

This singing voice sounded from Sister Rochelle Potaracke, a student teacher supervisor at Viterbo University whose vocals are a strong presence in many FSPA liturgies. And the teaching voice belongs to Sister Barbara Freed, a life-long musician who holds both a bachelor’s degree in violin (with a minor in music composition) from the University of Washington and a Master of Music from the Wisconsin Conservatory of Music in Milwaukee, Wis., and who, throughout her professional career, taught and directed and shared her gift of music with countless students. The two diviners of music never had the opportunity to collaborate until this session last summer when they practiced Sister Barbara’s original hymn Prayer of Praise in her home at Villa St. Joseph. Sister Rochelle says of Sister Barbara, “Her words and music—the strength, the flow, the fortitude—are absolutely beautiful.”

This musical forte was exulted last summer at the 36th Annual National Pastoral Music Convention in Washington, D.C., where Prayer of Praise (and also Psalm 139: Oh God, You Searched for Me composed by Sister Malinda Gerke) rang out with superb clarity. Of 35 pieces submitted by 14 different congregations only nine, including the selections by Sisters Barbara and Malinda, were chosen and performed. 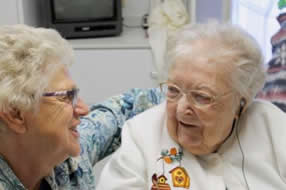 This grand accomplishment shines light on Sister Barbara, the composition of whose ministry has been somewhat unsung until this recognition. Mary Thompson, FSPA liturgist and vice president of Musicians Serving Religious Communities, says “The song came right to my mind when the organization announced they were looking for original compositions, written by religious for various occasions, that communities might want to share with others in the group. I think,” expresses Mary, “it’s a lovely selection.”

The constructive criticism Sister Barbara has for Sister Rochelle (“Keep it steady so all the vowels come out”) is perhaps even more remarkable than her body of work. She is continually quiet, mostly silent, in prayer and witness and life at Villa St. Joseph. Unspoken, though, until the words and the chords she composed stream to her ears. She succinctly sparks, positively on point, with every sounding note. Sister Rochelle recalls a visit to the Villa in 2012 when she sang “some of the old-time favorite hymns for the sisters in the chapel there. Many of the sisters who don’t often communicate also started to sing.” Sister Barbara, she recalls, was sitting a few pews behind the others, seemingly not engaged in the music, until the first strain of her Prayer of Praise began. “Her eyes opened up and she smiled, almost in tears.” She also, adds Sister Rochelle, “became agitated because the singers—who she believed she was conducting—had their backs to her.”

This extraordinary exchange last summer at the Villa—the one-on-one session for Sister Barbara, the teacher, and Sister Rochelle, the student—ended with the last notes of Prayer of Praise: “Great and Wonderful Lord God Almighty, loving and merciful Savior.” Sister Rochelle set aside the sheet music and helped Sister Barbara settle back into her chair. The composer became quiet again, conceivably in contemplation, yet forever strong in her divine hymn of praise for FSPA.