My Perspective: Sister Lucy invites us into Jacoba's Greenhouse 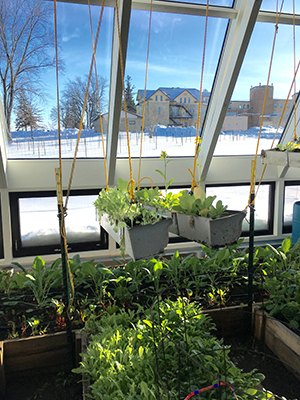 With nutrient rich, composted soil under her fingernails and dirt on her knees Lucy Slinger, FSPA ecological advocate, has tended to the bounties of the community’s farmland on St. Joseph Ridge in La Crosse, Wisconsin, since 2007. Produce harvested from early spring to late fall has proliferated annually from less than one ton then to more than four in 2016.

Several years ago, the notion of adding a straw bale greenhouse to the organic garden was offered as food for thought. Initially pursued the project didn’t come to fruition, yet for Sister Lucy “the idea just wouldn’t go away.” And so in 2014, with the support of the Ecospirituality Committee, FSPA leadership and facilities director, Whole Trees Architecture & Structures and her diligence, the net zero water and energy greenhouse—solely rain and solar sourced—came to life.

Clay excavated from the foundation formed bricks for walls. LED lighting and low-energy consuming fans power the underground heat venting system. Rehabbed windows were installed low for natural ventilation. Raised beds and whole-tree support structures are constructed of moisture and rot-resistant, locally-sourced Black Locust trees. The building, 50 feet by 24 feet, is “oriented around our specific location in the Northern Hemisphere, maximizing solar exposure during winter months and minimizing it in the summer,” explains Sister Lucy. Volunteers, sisters, affiliates and Viterbo University students helped augment setup and construction. All inclusive, construction began in November 2015 and concluded with a blessing as Jacoba’s Greenhouse one year later.

Jacoba’s Greenhouse was cultivated to model ecological sustainability opportunities to others; designed to function as an educational facility. It will be rich in internships for Viterbo students and volunteer opportunities all year-round. “And I hope our hermitage guests, sisters, affiliates and volunteers are beckoned inside to its warmth and healthful green life,” she expresses, “especially on those dreary, cold Midwest winter days.

“We are indeed blessed with God’s grace—grateful to have this facility and to use it to carry out the FSPA ministry of care for creation,” says Sister Lucy.

So how have Jacoba’s Greenhouse, farm-to-table produce and eco-education grown since then?

From her perspective, Sister Lucy gives us an update:

Most of what we’re growing is considered cool season crops so it is far more economical to simply use cool season greenhouse methods. The underground heating system is keeping the soil beds at 50 degrees or above, providing excellent growing environments. Even when we’ve had more than 14 days without sun, the earth block walls and other features are keeping the temperatures above 45 degrees day and night. The heater has only come on once—for three minutes—all winter long.

We will continue to experiment with what works best, doing a series of plantings to enhance ongoing production across the months and allowing some of the vegetables to actually go to seed for harvesting before we clean out the greenhouse in July.

This year, our Viterbo interns have already conducted research that includes the best-practice greenhouse radish varieties (we like French Breakfast or Cherry Belle) and desired seeding volume for companion plants (like lettuce, radishes, kohlrabi, spinach and carrots) that Eliot Coleman, the guru of cool climate greenhouses, suggests be used. Interns will continue to research best practices for the greenhouse. Everyone involved continues to grow in knowledge as the produce thrives.