Social media is awash in photos of the dead placed side by side on dirt roads in Cameroon. The displaced, the endangered and the terrified appeal to the international community to intervene, but their cries seem to fall upon deaf ears. In mid-February, news spread that armed soldiers had entered the Shisong hospital and searched the cardiac section allegedly to find wounded separatist fighters. Rumors spread that the military had set the hospital on fire, shots were fired and a patient burned alive. As is common in times of crisis and in the age of social media, separating truth from fiction has become difficult. What is clear is that Cameroon and its people are suffering.

“The international community is doing nothing, and people are getting slaughtered,” says Sister Eileen McKenzie, president of Franciscan Sisters of Perpetual Adoration.

The Republic of Cameroon and its problems may seem a world away to many, but for FSPA, the current crisis facing the Central African nation of more than 24 million people hits close to home. Watching from a distance is excruciating, particularly given the shared history of the communities and their personal connections.

The Anglophone Crisis, also known as the Ambazonia War, is an escalating conflict between the French-speaking government of Cameroon and separatists in the Anglophone, or English-speaking territories of Cameroon. The conflict began as far back as the 1960s, with English-speaking Cameroonians protesting marginalization by the French-speaking government. These days, Tertiary Sisters of St. Francis of Cameroon often find themselves caught in the proverbial crossfire. For FSPA, who have a beloved history with TSSF, there is no question of whether to help their sisters in Cameroon and others affected by the crisis; the only question is how.

The need is great. The number of internally-displaced people in the region has increased dramatically with the escalating conflict, whether they are fleeing gunfire near their homes or flocking to stay with family in French-speaking areas that aren’t as dangerous. Some adults have opted to stay home in the midst of the conflict, while sending their children to French-speaking areas to continue their schooling. 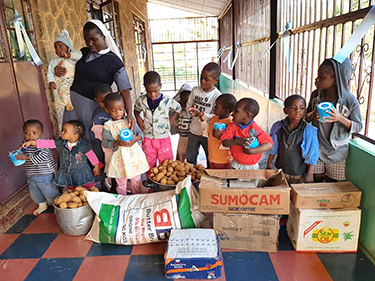 Caught in the crossfire
Where does that leave TSSF? Often in the middle. In places like the TSSF-run St. Elizabeth’s Catholic General Hospital in Shisong, on the outskirts of Kumbo (the same hospital that soldiers reportedly infiltrated in February), sisters are caring for the most critically injured and sick from both sides of the conflict, as well as providing relief to the displaced. Many of them have no financial means to pay for health care or assistance. Because the sisters are caring for people from both sides of the conflict, they’re often perceived to be at odds with the government’s interests.

FSPA is closely monitoring the situation and supporting TSSF throughout the crisis in several ways. The sisters have committed to a monthly financial gift through June 2019 as TSSF try to meet the needs of the displaced and their struggling school system. They’re also working together to create sustainable solutions so that TSSF ministries can continue in spite of the ongoing conflict. One example is working to move a pharmaceutical production unit to a less volatile area so that they can continue their essential health care ministries throughout the region. 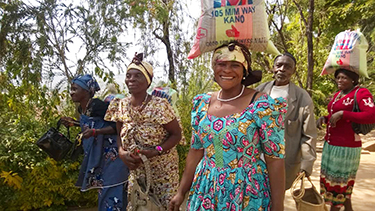 Relationships rooted in the Franciscan Common Venture, which accomplished much over 20 years, ended about a year ago when the communities involved determined that they had completed what was theirs to do. But the connection between FSPA and TSSF remains strong.

“Sisters were going back and forth for two decades between the U.S. and Cameroon, and we developed some very important personal relationships,” explains Sister Eileen. “There is just this really deep relationship between our congregations that is rooted in friendship, Franciscanism and the Gospel.”

The sisters entered into a mutual discernment process, trusting that God would show them how their connectedness was to continue, not knowing how dire the situation would become. “When I was last in Cameroon in March 2018, there was political tension … and then things started to get really hot. The number of displaced persons started to rapidly increase. The number of refugees increased. And family members of sisters we knew were being shot.”

FSPA remains committed to helping TSSF through these challenging times, both financially and spiritually. Meanwhile, Sister Eileen says concerned members of the public can help in numerous ways, including praying for peace, writing lawmakers to encourage intervention for peace and donating to support the work of the sisters in Cameroon via FSPA mission advancement or 608-791-5282.

Learn more about FSPA's actions for peace in Cameroon