When Sisters Sharon Berger, Mary Kathryn Fogarty, Lisa Zmuda and Marlene Weisenbeck traveled to Cameroon last November as a part of the Common Venture, they were greeted with open arms and celebration wherever they went. "We were met by children, drums, costumes and singing as they led us into the village," reflected Sister Marlene. "It made you feel noble, regal and special." Sister Marlene says the same hospitality was extended to them throughout their stay in Cameroon. 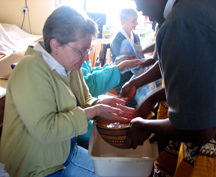 Upon arrival in Shisong, Sister Sharon Berger, left, follows the Cameroonian custom for travelers of washing their hands and feet after their journey.
"The people are great," says Sister Lisa. "Even though they live on little or nothing-you know-people are very poor, but their spirit is wonderful. It's warm, welcoming. I have never seen such welcomes in my life. We were at least a mile out of the village, and there were people standing there waiting to lead us into the village with song and dance and to welcome us."

"What stands out to me are always the sights and the sounds, the singing and the dancing, the colorful garments, the lushness of the landscape, the delicious, wonderful fruit," explained Sister Sharon. "I remember the smiling faces and the eyes, especially of the children, and that feeling of being welcomed every place. The first school we went to, the children were out on the road with flowers and branches and singing and dancing and just ushered us in. My eyes were filled with tears because it was just a wonderful experience."

That spirit is an enduring part of the Common Venture, a project which includes the combined efforts of four Franciscan congregations: Franciscan Sisters of the Eucharist, Meriden, Conn., the Sisters of St. Francis of Assisi, Milwaukee, the Tertiary Sisters of St. Francis (TSSF), Cameroon, and the FSPA. Representatives of the four congregations gathered not only to plot their future endeavors, but also to further develop the relationships between their communities. Common Venture partners typically meet twice a year in the United States, making November's meeting their first ever in Cameroon, and a unique opportunity for the U.S.-based communities. 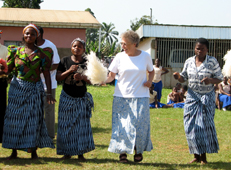 Sister Mary Kathryn Fogarty dances with the Cameroonians at one of their many performances during the sisters' visit.

Sister Marlene says it's important to note why it was necessary to hold a meeting in Shisong, Cameroon, and she says Sister Alphonsa Kiven, TSSF provincial, framed the purpose of the meeting quite well. After attending an international conference in Assisi where the topic of the meeting was the "many faces of Jesus," she wrote of the Common Venture meeting, "This particular gathering in Cameroon would be an opportunity to experience and celebrate the African face of Jesus; an opportunity to be in the culture, to be taught by the culture and the Cameroonian sisters, and to interact with the Cameroonian people who have experienced the Common Venture relationship; and to be simply with the sisters in relationship, to experience their liturgical expressions, and hear the testimony of what has been most effective in the Common Venture relationship."

To achieve these goals the FSPA representatives split up into three teams with sisters from the other communities, each traveling to a different region. One group headed to the far north end of Cameroon, on the border with the country of Chad. They explored Yaounde, Maroua and Dzigilao. The other two groups explored west central Cameroon with some overlap, one visiting Edea, Douala, Bangang, Bamenda and Njinikom, and the third team in Edea, Douala, Bali, Ntasin and Bamenda. The schedule was at times demanding; long travel was required of some of the visitors, on substandard roads through the bush. Sisters visited medical facilities, churches, an orphanage, a palace and convents.

Sister Sharon, who has a background in health care, said she was especially impressed with the sisters' ability to bring health care to so many people, in spite of having so few resources at their disposal. "They may not have had the latest equipment, but you could tell that everyone there, just with all of their hearts, were there to meet the needs of the people." 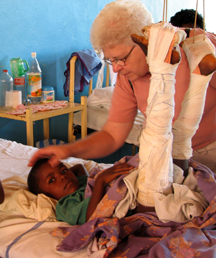 In Bafut, Cameroon, Sister Marlene Weisenbeck offers comfort to a young patient at the orthopedic hospital.

Throughout their travels, the strengthening of relationships among the Common Venture communities remained paramount, said Sister Marlene. "We really wanted to emphasize the relationship, where we exchange the meanings of our vocation as Franciscan women, companion one another on this journey, and where we can exchange our goods, and by goods I mean our founding charisms, our qualities and our cultures. Sometimes it's material goods, and sometimes it's spiritual goods, or a spiritual companionship."

Sister Mary Kathryn explained that the relationship building aspect was especially important for sisters in the northern part of Cameroon. "They might have heard about it, but they couldn't put a face to it. So they had a lot of questions about who we were, and how we were experiencing this (the Common Venture)."

Said Sister Marlene, "Of the 270 Tertiary Sisters we probably met close to 200. We exchanged thoughts about the purpose of the common mission. We also visited with lay employees at the hospitals, the schools and parishes." When they completed their travels to outlying areas, all three groups gathered in Shisong for the Common Venture's bi-annual meeting. Discussions with the TSSF included issues of mission effectiveness, formation and the future direction of the Common Venture.

"It was also good to meet some of the other councilors from the Cameroon province. It was good to get a feel from them as to what they see are some of the future needs," explained Sister Mary Kathryn.

Looking ahead to upcoming goals of the Common Venture project, sisters from each partner community will participate in cultural audit workshops offered through The Center for the Study of Religious Life. Sister Marlene explains that with new understanding of each individual's community, it becomes easier to understand each other's cultures. Collaboration will continue to be key. 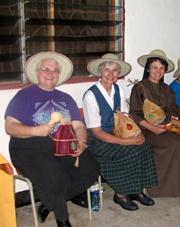 First, the TSSF have asked for assistance in pulling together their recent history and archival items. Second, the group is looking at offering courses in formation, as well as ongoing formation education. The Cameroonian sisters have also asked for financial backing for continuation of their "Project Hope" effort, a program which makes education, baby formula and medicines available to AIDS patients, particularly new mothers, to prevent the spread of the virus to their children. To continue to receive financial support from the World Bank for the project, a medical doctor must oversee the program at every clinic where it is offered. FSPA and the other Common Venture partners have been asked to provide funding for a traveling physician, who would supervise the program at various clinics in Cameroon. The project is still under development.

Finally, the FSPA continue to sponsor Sister Alexine Nii Munteh, who is studying toward a bachelor of integrated studies degree at Viterbo University in La Crosse, and a male student, Kongmo Nsameluh, who graduated from Winona State University in December with a master's degree in nursing, and is currently preparing for his licensure examination. He will soon take his newly-learned skills acquired at Mayo Clinic in Rochester back to Cameroon to where he will teach in the nursing school under the direction of the TSSF.

The next meeting of the Common Venture participants is set for April in La Crosse and Sister Marlene says she will likely incorporate some traditional Cameroonian items into the gathering, including "wrappers" (pronounced RAH-puhs), traditional clothing, which the sisters from Cameroon gifted to their visitors. Planning will likely begin at that time for a celebration of the 160th anniversary of the three U.S. communities and the 10 year anniversary of the Common Venture, both of which will take place in 2008.

Overall the visit was an opportunity to meet the people who benefit from the programs offered through the Common Venture, and to get to know the sisters who make the program outreach successful. Sister Lisa says, "I thought it was a wonderful experience. Sometimes it pulled at your heartstrings to see the poverty that they're facing, and I think the sisters there are doing marvelous work with the people. They're trying to bring the standard of living up and just to educate to a better way of life." 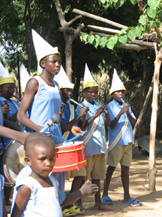 Sister Sharon says she was touched by the dancing and singing, but even more so by the chance to get to know the Cameroonian sisters on a deeper level. "I appreciated being there long enough to hear their stories of struggle. They really began to share with us some of their struggles, and turmoil, the hard things of their life. We got beyond the dancing and the singing and the joyfulness of their lives to touch that reality."

"I think one of the things (this trip) did, is it brought the Common Venture to a lot of sisters who probably had no connection with it at all, and that was good," explained Sister Mary Kathryn. "The other thing I think it gave me is a deep admiration for the dedication of these women to their people. That's what it's about . . . we want to respond to the needs of our people."

"This is one of those experiences that takes a very long time to process," explained Sister Marlene. "We come home from these things and immediately jump back into our work, and it takes months, I think, for a person to really internalize the full experience of it."