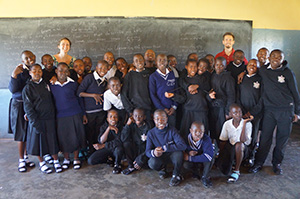 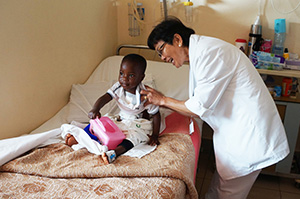 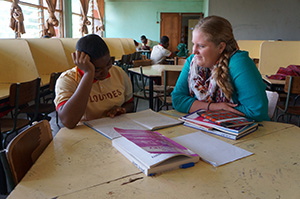 "It was on a relatively calm road that a man stopped me," reflects Ashley Hansen, a missioner with Lay Mission-Helpers who served the ministry of health care as a volunteer in Cameroon, West Africa. "His plea for money was nothing new to me. What got me was his courage. He was an older man, his eyes, clouded with cataracts, betraying loneliness and surrender. He pulled out a piece of paper and pencil he had sharpened with a knife and wrote five words that cut me to the core, ‘I am deaf and dumb.’

“After making sure I had read his note, he continued to write. He had a wound on his right calf. It was infected, and he has diabetes. He knew he was going to lose his leg. The 40 U.S. dollars he was asking for was to cover the cost of an amputation, medication and a few nights in the hospital. I didn’t have money for him, but he was more than thankful for my offer to clean his wound.

“I crouched on the side of the road, pulled on a pair of gloves (one of the things I regularly have with me), and got to work. I didn’t have the supplies I would have liked to have, but I managed. Perhaps my mistake was looking up at the people walking past us. They were staring, pointing and mocking. My heart sank. I recognized many of the people from my frequent walks to catch a taxi, from the market or from church on Sunday, and all I can remember thinking was how un-Christian they were being.

“As Christians, are we not called to care for the sick and needy? Are we not called to love our neighbors? All I accomplished by cleaning his wound was buying him a little time, and yet in that moment, he smiled as if I had handed him the keys to the kingdom. His final note to me was simple but heartbreaking: ‘You are the only person who treated me like a person. Bless you.’”

Ashley and countless others ministering in developing countries through Lay Mission-Helpers for decades have felt “called by baptism to live our Catholic faith, to share our gifts and to learn from others as we walk with the marginalized in our world. We value collaboration, effective cross-cultural communication, building community with those whom we work and prayer and spiritual growth.” 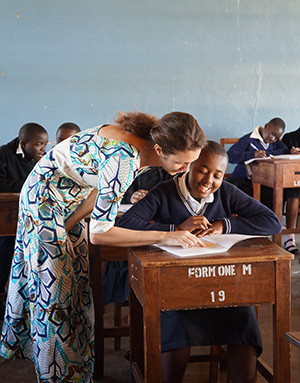 “We are unique in that we only go where we are needed,” says Sarah Scopio of Lay Mission-Helpers. The call to care in professional capacities that include administration, health care and education comes directly from Catholic bishops serving dioceses overseas. Lay Mission-Helpers is one of just a few organizations that send not only individuals but also families to serve together. All are mentored with “over 350 hours of training that prepares the candidates for the spiritual and cultural challenges of service.”

While such ministries are means to the basic quality of life every human being deserves, volunteers also serve a highly personal and spiritual purpose. “Our missioners are going in response to receiving a call to live their faith through witness and service,” says Janice England, Lay Mission-Helpers director. “Whether through nursing, teaching, campus ministry, etc., they also bear witness to their faith by how they interact with the community. They attend daily Mass, are often involved in a prayer community and, since they are doing this in another country, are extending God’s reach.”

And with the goodness of giving, FSPA is broadening such breadth of faith-filled service to God, self and others. “A campus minister was sent where there was no one to run the ministry, and the lives of hundreds of college students were touched; a nurse was sent to a pediatric cardiac unit and not only gave excellent patient care, but touched the lives of patients’ families as well.”

With FSPA support, Lay Mission-Helpers is indeed there for the underserved it is called to care for. Thousands of eyes are watching them, observing how faith can be lived out.

Eileen McKenzie, once a Lay Mission-Helpers volunteer and now a Franciscan Sister of Perpetual Adoration who continues to support the ministry, shares her reflection of the organization’s past and present mission of bringing cultures and faith together where Christ is most profoundly met.

“FSPA supports the work of Lay Mission-Helpers for several reasons. One is that it is a lay-led movement that, in the spirit of Vatican II, highlights the gifts of the laity in promoting the mission of the church. They underscore the witness of the family as missionary and offer each volunteer a lengthy, high-quality, faith-based, cross-cultural formation experience before being commissioned. While many U.S. church organizations working in developing countries concentrate on short-term projects and aid, Lay Mission-Helpers focuses on the mutual exchange of gifts and resources that happens when ordinary people reach out to each other, across cultures and in faith, and spend years working and living together. Volunteers from the U.S. often offer their professional resources and become the recipients of spiritual and cultural experiences that change their lives in unexpected ways.