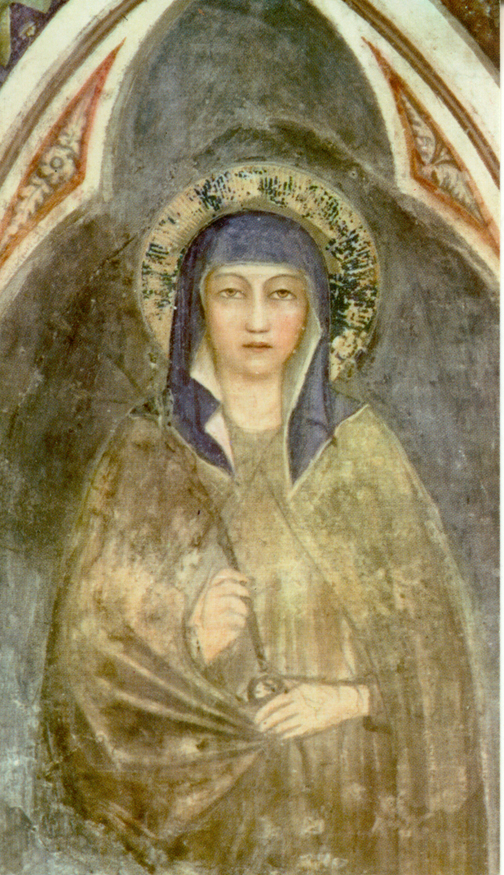 Clare, 1193 - 1253, lived as a penitent within the Offreduccio family household and was known throughout all of Assisi for her holy manner of living.

On Palm Sunday, 1212, Clare took a bold step on her spiritual journey. She renounced her privileged position in the nobility and received the garb of the followers of Francis. Eventually, she made her home at San Damiano in a small church repaired by Francis, just below the city of Assisi. Clare's sister, Agnes, joined her as well as many women from the area. Under God's guidance, Clare created a new path for women, embracing poverty, humility, and charity as companions on their journey.

The Gospels provided the central focus of the Poor Ladies' lives as well as the inspiration and example of Francis and the brothers. They ate whatever food the brothers begged for them, wore simple clothing, gardened and wove cloth. At age 21, Clare agreed to accept the role of abbess, and until she died, at about age 60, lived among her sisters as one who served. She called her companions “sisters” rather than “nuns,” as was the custom of the times and urged them to be examples and mirrors of God. 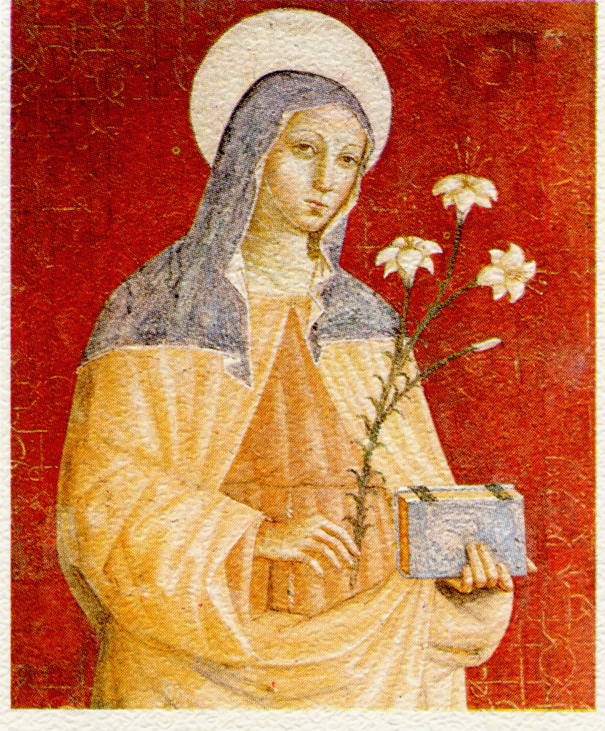 Clare requested and received the Privilege of Poverty (living without communal property or individual possessions) in 1216 from Pope Innocent III but did not receive full approval for her form of life until she lay on her deathbed. She was the first woman in the history of the church to have written a rule for women.

Her example prompted many women throughout Europe to join Poor Clare monasteries, with membership numbering 150 at the time of her death in 1253. Considered a co-founder of the Franciscan movement, she was declared a saint in 1255.

Clare of Assisi lived her life in a spousal covenant with God, in fidelity to the love and power of God through her experiences in life; and she was the light of hope and the mirror of love. We get a glimpse of Clare’s resolve to persevere in this fidelity to God in the face of familial and papal challenges and threats; in the midst of years of illness and suffering; and in the undying hope for the approval of her Rule and Form of Life in Clare’s Second Letter to Agnes of Prague. Let us ponder a while this gem of advice that Clare gave to Agnes in her time of papal intrusion and the challenge to live her life as a Poor Clare.

In Clare’s letter, then, she writes, What you hold, may you always hold ...

What did Clare hold?

A faith that was grounded in her espousal covenant with God.
A love rooted in God’s unconditional love for her.
A desire to incarnate this love and fidelity in her life with her sisters, with Francis, and with all whom she would meet in her service to the poor.

What do you hold?
What is most important to you that you will always hold within your heart and will incarnate by your life?

What did Clare do consistently throughout her life?

She tended to the day-to-day needs of others.
She lived as a model of radical dependence on, and trust in, God.
She endured trials and illnesses throughout her life.
She patiently spun cloth and wove these threads into beautiful altar cloths.
She lived an ordinary life extraordinarily.
She prayed ... always.
She centered herself in the loving embrace of the Holy One who gave her the gift of Life.
She gazed, considered, contemplated and she desired to imitate the Holy One in all that she held and in all that she did so that she could live her life securely in the poverty that is dependence on God in obedience to the Holy Spirit within.

Again, if Clare were among us, she might ask:

Clare continues in her letter to Agnes:
But with swift pace, light step, unswerving feet
so that your steps stir up no dust
may you go forward securely, joyfully and swiftly
on the path of prudent happiness.
Can’t you just see it!? Can’t you just see Clare as she went about her daily routine energized by the prudent happiness she experienced from her total dependence on, and trust in, God? She did not trudge through life dragging her feet because of all of her worries and concerns. She was not weighed down by the baggage of fears, cynicism, despair, suspicion, jealousy or criticism of herself or others. Rather, she went forward securely, joyfully, and swiftly grounded in the prudent happiness that came to her NOT because she was the founder and abbess of a new form of religious life; NOT because of her noble birth and privileged childhood; and NOT because of her education or her access to Francis, the Pope or any others of social or ecclesial importance. Clare went forward securely, joyfully and swiftly in the prudent happiness that was rooted in her loving dependence and trust in God.

How is your step these days?
In what or in whom is your happiness found?

Clare concludes her advice to Agnes (and us) with this thought:
believing in nothing
agreeing with nothing
that would dissuade you from this commitment
or would place a stumbling block for you on the way,
so that nothing prevents you from offering
your vows to the Most High in the perfection
to which the Spirit of the Lord has called you.

As we ponder Clare’s life, we might hear Clare ask us:
What might be the stumbling blocks in your life?

Clare’s sole desire was to ground herself as a branch to the Divine vine; to be the Mirror of Eternity in the way she lived her life with her sisters and in the depths of her prayer and contemplation of the Crucified Christ and the Risen Lord. In this way, she allowed herself to be transformed into the image — the mirror — of the Godhead Itself.

So, today – and always...
What you hold, may you always hold ...
What you do, may you do and never stop.
But with swift pace, light step, unswerving feet
so that your steps stir up no dust
may you go forward securely, joyfully and swiftly
on the path of prudent happiness.
believing in nothing
agreeing with nothing
that would dissuade you from this commitment
or would place a stumbling block for you on the way,
so that nothing prevents you from offering
your vows to the Most High in the perfection
to which the Spirit of the Lord has called you.

MAY GOD’S PEACE BE WITH YOU. AMEN.