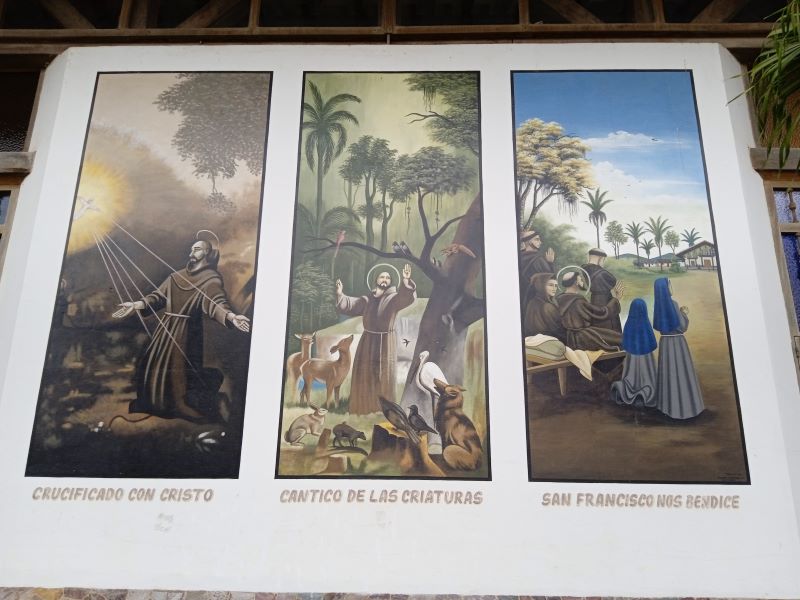 This incredible work of art is painted on the wall of the church in Ascención. It's on the parish side, which is opposite the convent. In other words, I have to walk through the church and outside to see it. At first, it seems like a nice mural depicting three times in Francis' life. When he received the stigmata (the wounds of Christ), preaching to creation, and the blessing of St. Francis.

As I looked closer though, I realized that the three scenes are set in Ascención! The trees and flowers are those found here. The animals in the center that are depicted include a macaw, stork, pigeons, swallows and I'm pretty sure that little creature in the center is a Jochie!  (I still don't know how to spell that!) Even the dog that is sitting so regally reminds me of the German Shepherd, Rex, who guards the parish in the evenings. Finally, the last painting depicts the Tertiary Sisters of Saint Francis next to St. Francis, stepping in for the Poor Clares as Francis blesses the church and pueblo.

Artistry that tells a story is probably my favorite kind of art, but this goes even further, bringing the pueblo into the story.

If you want to see a full-size version of this art, you can get to it by clicking here.