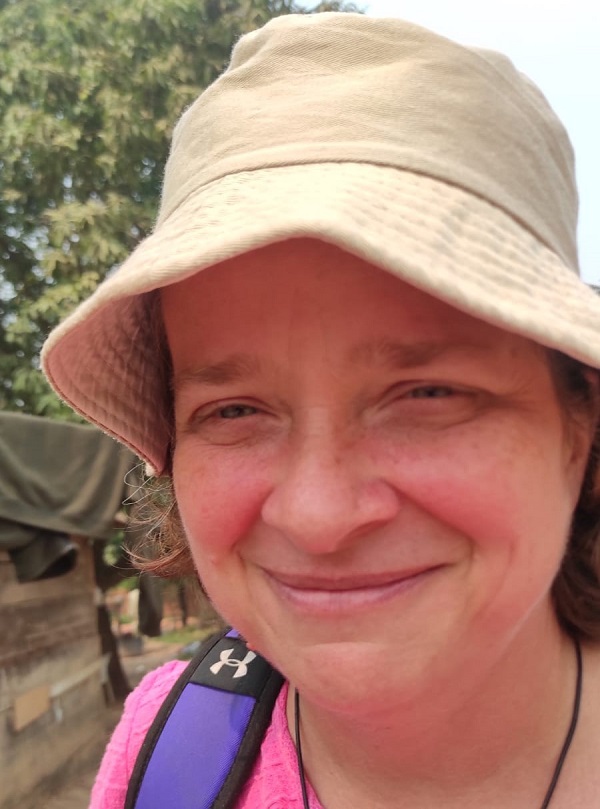 Many great pardons for waiting so long to post this but there was a fiesta in Yaguarú, and so I spent most of the week there. Since there's no WiFi, I can't write my posts there. Now that I'm back in Ascencion, here is a quick recap of the last couple of weeks!

The fiesta in Yaguarú was for the Catholic celebration of the Exaltation of the Cross, which the church in Yaguarú is named for. This is common for mission pueblos here in Bolivia. The town is so identified with the mission church, where the people originally settled, that the celebration becomes a celebration of the town. The festivities began when Padre Franz, a German Franciscan priest who served for four years in Yaguarú came to visit. On that same Sunday, the novena began for three days leading up to the festival. On Tuesday, the fiesta began in earnest with the Vigil Mass for the Exaltation of the Cross. That was followed by dancing and music in the plaza outside of the church. The fiesta continued on Wednesday with Mass in the morning celebrated by one of Bolivia's bishops. 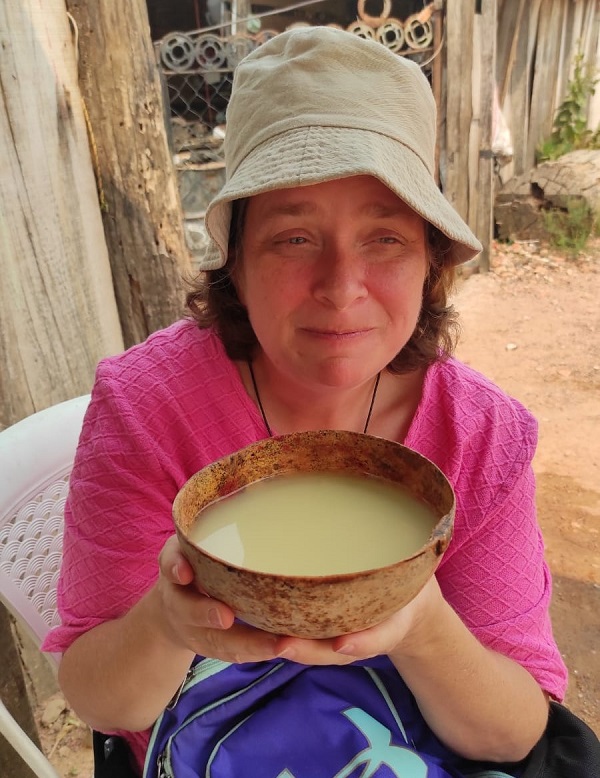 As usual for Yaguarú, the music was incredible at the Masses. Great feasts, including one at the convent for the sisters as well as the priests who co-celebrated the Mass and of course the Bishop, were all there. Roasted pig with lots of delicious food was enjoyed by all. The official fiesta concluded with Mass on Thursday. Music continued all night, every night during the fiesta and through the weekend. It proved a bit much for some, but I am happy to be a sound sleeper so it was all good. Interestingly, on Sunday evening at around 10:30 p.m., the power went out throughout Yaguarú and stayed off until 6 a.m. on Monday. I didn't realize that I could sleep even better with total silence, but it was a great rest!

Over the last two weeks or so, there have been lots of wildfires in the area. They create a haze and the sun rises and sets a bright red. Although every day someone says, "Mucho humo! (There's a lot of smoke!") it doesn't phase the residents here. It took me some time to realize what it was, but it's a reality in a place that has a wet and dry season I suppose. The rainy season begins with spring in October, so hopefully, we will get good rain a bit early to help. I was able to see evidence of some of the fires on my ride back to 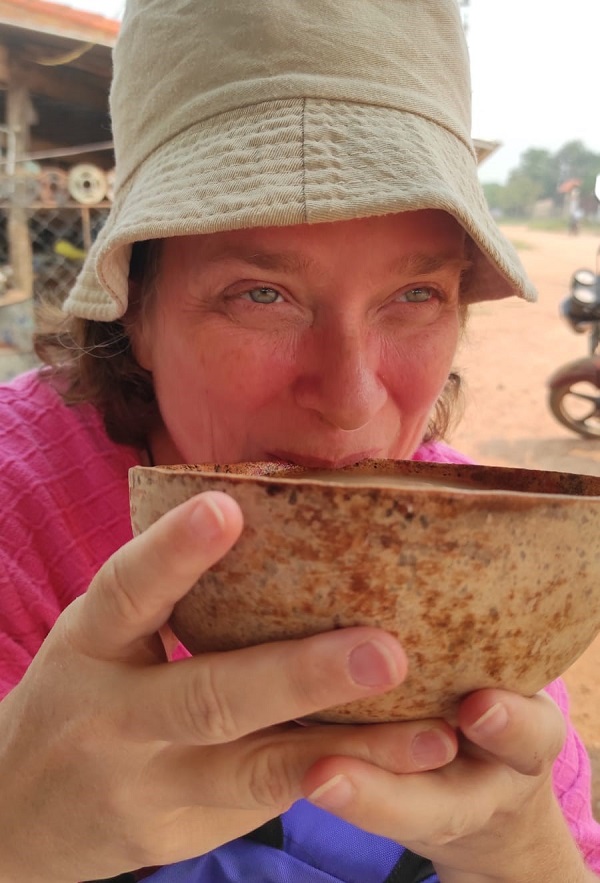 Ascencion on Monday. It looks scary, I admit, and I wonder how much of it is natural, and how much is because of the changes to the area as more people come to live here.

Sister Yanira and I continue to visit families in the different barrios (neighborhoods) here in Ascencion. Lately, we have been visiting people who live closer to the town center. The needs are always the same, and I am always surprised at how many children are malnourished. As I am learning more, I have learned that there is malnourishment, not just from lack of food, but lack of good food. Our Soya workshops with families help with protein deficiencies, but there are vitamin deficiencies as well. Anemia is seen often as well as skin discoloration from a Vitamin C deficiency. As you might guess, the Nutrition Center helps with vitamins to supplement the children's diets when needed. 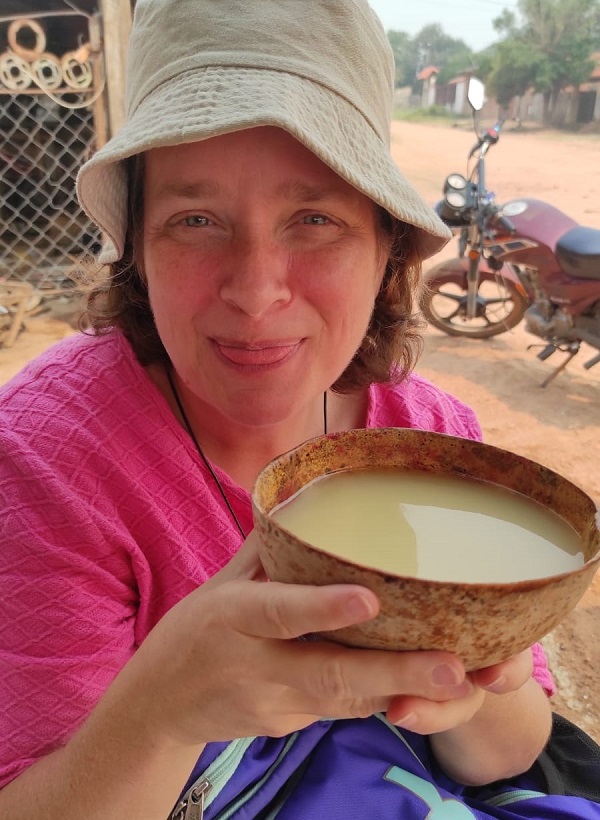 stopped at a roadside stand during our walk one day and enjoyed some Chicha (a drink made from yucca, corn and a bit of sugar - I am sure you remember me talking about it before.) She sent them to me in this order saying how funny my expressions were as I drank it.

You can see that I'm drinking out of a sort of bowl. It's a traditional "chomba" bowl made from a shell of a giant fruit that grows here. Much like a gourd, it is dried and then used as a bowl. Depending on the size, and they can get pretty big, they could be used for serving bowls or mixing bowls as well. This was probably the size of a super large soda from McDonald's! :)

I enjoyed it very much and although the photos might suggest I was scared to drink it at first, I was actually really looking forward to having my chicha out of a chomba for the first time. Blessings to you all this week! As always, your prayers are greatly appreciated. It's amazing how I can feel them even though I am so far away!

Great to hear from you. Looks like you have a sunburn from the photos. See you on Zoom I hope on October 12. Karen


Meg, I can’t believe you forgot the Oxford comma in the title ;) What an amazing opportunity God is allowing you to be part of sharing His love all over the world. Continued blessings and strength to be His hands and feet.