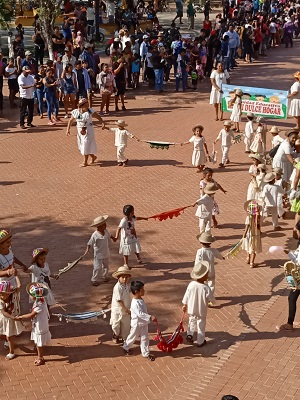 This week, we celebrated the founding of the pueblo (which is the word for both the town and the people of the town) on Ascension Thursday. The fiesta was much longer than that though. It started on Monday and ended on Friday. During that time, there was no school. Most people had off from work Wednesday, Thursday and Friday. It was both a surprise and a joy to experience a week of fiesta (party).

I am sure there are some Catholics thinking - but wait - we celebrate Ascension on Sunday! Well, we did too but the actual feast day is Thursday. The church moves the celebration to Sunday. I didn't mind celebrating it twice!

During the days of fiesta, there were Masses each day. The last three days the Mass was followed by a procession of varying lengths. There were two large parades featuring traditional dancing from the different schools. People of all ages participated. The church was decorated in spectacular fresh floral displays. The church was so full, that there were days the sisters had to bring chairs from the dining room to give space to others. On Thursday, there were two bishops and four priests from all over Bolivia. Here at the convent, we had two days of delicious feasts and enjoyed special treats at all of our meals. 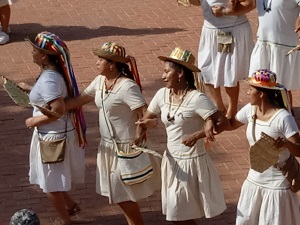 There was extra time at the meals to have long conversations and enjoy each other's company. There was so much happening, that it would take too long to describe it all. For now, I would love to tell you about the dancing!

Perched high on a balcony, we have perfect viewing of the dancers. Skirts twirling, ribbons dancing, lines and circles formed with feet skip-hopping in joy. Flutes, drums, violins, trumpets, trombones and guitars - different groups but all playing the same song. The dancing continues until each person has passed the church. Full of tradition, stories and love, I am filled with nurturing affection as I embrace the pueblo in prayer for happiness, love and enough of whatever 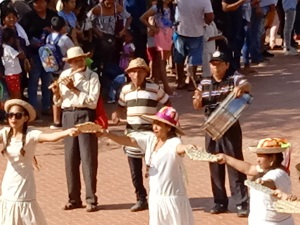 I was so impressed by the dedication and joy that was part of the traditional dancing. Both days, it was HOT, in the mid-90s with high humidity, and that didn't stop any of the dancing. Traditional of the area, the dancing was full of energy. I would try to describe the dance, but I would not do it justice, so if you are interested in seeing it, you can follow this link to get an idea of what the steps look like. There is a lot of variation in the different routines.

The dress is usually traditional. The women in some groups wear hats with ribbons woven into them. The most common dress is a simple white or creme with green and yellow woven in. Sometimes there are pictures painted on the front. The men 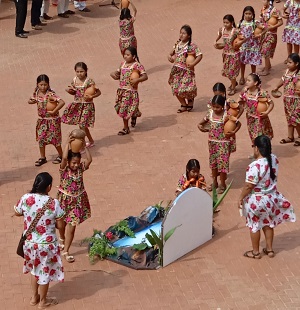 wear simple white shirts and pants and sometimes have patches sewn on them. I noticed that sometimes they cuff their pants a bit higher on one side than the other, but I'm not sure of the significance of it.

The dances tell a story. The most traditional story is of fishermen who are fishing and "catch" the women. I am not sure if the women are representing fish or a maiden of the sea. The women then give the men a gift. After receiving the gift, the dancers dance together, which I am sure is them falling in love. Finally, they dance off together. As Disney would say, living happily ever after. For this dance, the men have fishing poles and the women have woven baskets.

On the second day of dancing, there were other stories being told. Each was a tradition they were handed down through dance. For example, one of the dances featured children planting, harvesting and drying rice, turning it into flour, forming it into bread and baking it in an earthen oven (complete with an actual fire I might add).

I noticed that tradition is very important here. There is a lot of care and attention taken for not just the older generation to be a part of it, but equally important is handing down those traditions to the youngest generations. I saw this in the dancing, where even the Kindergarten age kids participated. It was also in the processions, where the elders of the community knelt next to Confirmation students in prayer.

Coming from the United States, where tradition is many times scoffed at, and new is what matters most, a place full of marketing and promotion, the honoring of tradition is both a bit new, interesting and comforting to me.

Here, I've seen brooms made out of dried weeds, most cars 30+ years old and working well, mended clothes, and old things like chipped mugs not thrown out but continued to be used. I think that there is something here to be learned about living and simplicity. This kind of honor strikes me as being in line with the honoring of traditions.

Yes, there is poverty here, but that's not the point. As I get to know the people more, I start to see something deeper here. Maybe it's an attitude of respect and care that I 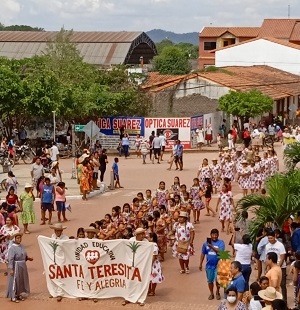 am starting to understand more. Only time will create a more complete picture. Until then, I will honor the people by loving who they are - and their traditions too!

As I get ready for a visit to the United States in about a week, I wonder what life there will look like after my time here. It will be interesting to see how I've changed. Will I live differently after knowing this life or will I settle back into this pace of the US? We will see!

When these beautiful women come to call at the end of Carnaval - it's time to dance! 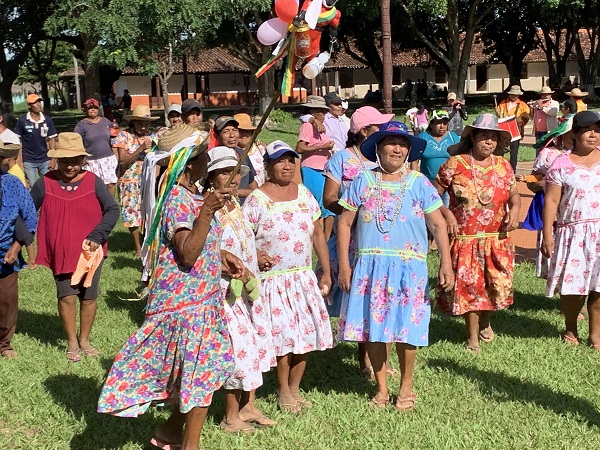 The last day of Carnaval was Sunday and we all went to Yaguarú (pronounced ya-wa-roo) to enjoy the day with a big picnic at the small pueblo about an hour from here. After the picnic, Sister Yanira and I went for a long walk and came back to relax. It was really hot that day but a group of mujeres (women) from the village came to the convent accompanied by drums and flute music. It is a tradition, that when the women (called "originales" I think!) come, they are dancing to mark the end of Carnaval. The joy of these women was incredible and they invited the sisters to join them (which they did of course!) When they invited me, I considered saying no, but then I decided to do it anyway. Dancing is not my thing, but I decided it was an honor to be invited and join in the fun. It was an incredible feeling to be surrounded by joyful, strong, wise women and to join in their dance. It was the thrill of a lifetime. I didn't realize it, but someone was recording our dance. You can see it by clicking here. God bless these women. What a way to end a great day! 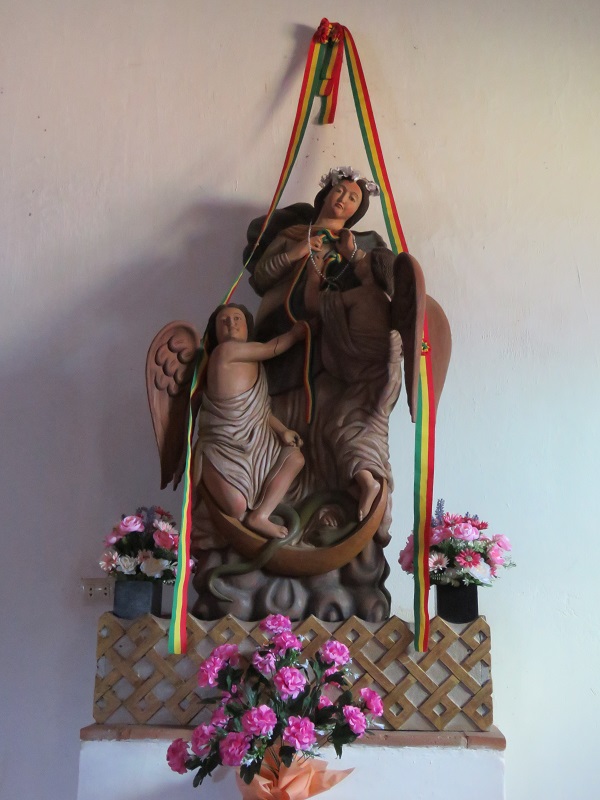 In the culture here (and many other places too!) May is devoted to Mary. Here in Ascención, there is a large blue and yellow display with a beautiful statue depicting Mary.

I will be spending the next four days in Yaguarú, a special small town where the sisters minister Thursday - Sunday. I thought it fitting that I use the Mary I saw in the church there back when we went there for the end of Carnaval.

This is Mary, Undoer of Knots. I was excited to see it when I was there. The devotions to Mary, Undoer of Knots focus on asking for her intercession to help undo the knots in our lives. St. Irenaeus is quoted as saying that Mary undid the knot of original sin, and so a special devotion was born from that.

There is a novena connected to Mary, Undoer of Knots, but I tend to ask for help with things that have me tied up inside.

If you're interested, the start of the novena begins...
Dearest Holy Mother, Most Holy Mary, you undo the knots that suffocate your children, extend your merciful hands to me. I entrust to You today this knot and all the negative consequences that it provokes in my life.