Tuning in to God, discernment

Often when I am looking for inspiration in my writing, I go to places that feed my soul. Recently, I was sitting in the back row of our adoration chapel, pondering what to share in my next blog, while the piano in the main chapel was being tuned. My thoughts were punctuated with the same note sounding over and over again. I could hear slight adjustments with each stroke of the key. Occasionally, a scale would plunk out. 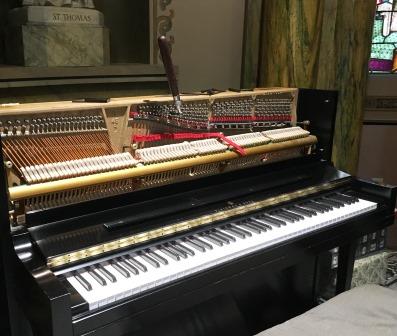 The piano in Mary of the Angels Chapel undergoes the tuning process.

Curious, I went to investigate and had a short conversation with the man tuning the piano. I asked him a few questions about the process and was fascinated to learn that he begins by striking a tuning fork. He then plays one note on the piano, listening as he adjusts the tension on the piano wire to match the pitch, then tunes the entire piano by ear. He listens not only to the single pitch but also how it sounds in relationship all the other pitches too. He shared how the environment around the piano, like climate and season, also effects the process. There is never a perfect time to tune.

This resounding experience inspired me to ponder how discernment has similar elements. We are all influenced not only by our own gifts and talents but also where we find resonance with others. Often in discerning religious life, questions arise like “How will I know which congregation is best for me?” or “What if the congregations I’m interested in minister in similar ways?”

These are great questions. Even when connecting to congregations with like-minded missions, there are steps to take to learn more. Ask any of your friends or family members how they chose significant others.  A list of characteristics does not tell the whole story. Two people could have the same job, live in the same city, look similar physically and enjoy the same hobbies, but there are thousands of idiosyncrasies that define differences when you get to know them more deeply. Sometimes there is more mystery than explanation but, at some level, these couples have found compatibility with one another.

It was the same way for me when I was exploring discernment. Each community carried individual tones and music of life. From all the possibilities, it took time to learn about the differences between apostolic, evangelical, monastic, cloistered and missionary congregations for women, not to mention the different rules of life each follows (like Franciscan, Dominican, Benedictine). Then throw in ministries similar, if not the same.

And so I visited different congregations, finding similarities and also distinctions. Some congregations I liked and others I was ready to leave almost as soon as I arrived; not because the congregation was unpleasant but because my gut instinct let me know immediately that our views of the world were too polar opposite.

There was a combination of factors as to why I chose to be a Franciscan Sister of Perpetual Adoration. The more time I spent with FSPA I found that my goals, philosophies and beliefs coincided with many of theirs, and the viewpoints that didn’t exactly align invited more exploration as to why or why not. FSPA engaged both my mind and heart.  Although it was a mystery as to why a congregation several states away resonated more with me than those near to where I lived, I had to undertake my own pilgrimage of discernment.

It reminds me of Abraham, having to make a journey to find his own home as he does in Genesis 12. God called him to leave the land that he knew and as he traveled he learned more about who he was. St. Francis of Assisi, our congregation’s founding inspiration, had to learn about his own journey of faith by first pursuing glory and honor through seeking knighthood but, along the way, learning his true call was to rebuild the church and be a champion for peace. It took both Abraham and St. Francis their lifetimes to live into the depth of their call from God. But they also had to take a step towards their calling and learn as they went.

I can say that what first attracted me to my congregation is still present but what means more to me is the relationships I’ve been blessed with; the deepening of my own spiritual life, the ministry experiences that I never would have planned and the excitement that each new day brings. It was both exhilarating and daunting to take initiative that first visit but had I not my life would not be what it is — a completely, always surprising gift — today.

This week a few question for you to ponder …

In what ways are you discovering that your discernment is not a simple, quick decision but a pilgrimage?

How do you know when you resonate with someone or something?

Where are we going?

These are questions I recall asking incessantly, as a child, every time my family would get in the car and head out of our driveway for a road trip. Sometimes we had a plan and direction; others, we went out for an adventure and looked for signs touting interesting destinations and attractions along the road.

Life, I‘ve discovered, offers both of these experiences: sometimes I know exactly where I’m going but, more often than not, it reveals itself in the right place, at the right time. Yet I know that God is in everything—the things I plan and the surprises around each twist and turn.

Religious life is also a transformative road trip; each generation guided by its unique calling in the world. Some ministerial routes are planned according to congregational tradition while others are detoured to guide us to new destinations of need.

It reminds me of the story of the Good Samaritan, taking his own road trip. He had a plan when he started his journey yet when he came upon someone in need not only did his itinerary change but, I imagine, his heart was transformed too. 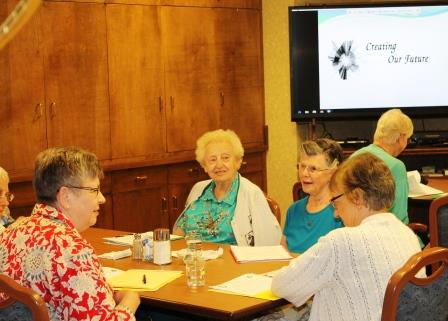 FSPA gather together to envision, plan for and celebrate the future of religious life.

This weekend, our congregation will come together for community days: a convergence of all FSPA ministries and experiences and ideas. Our hearts and minds are pointing to the future of religious life with the intention of our conversations and prayer to help us live into our now and what is to come. For, as Franciscan Sister of Perpetual Adoration Eileen McKenzie writes in her poem “Rebirth” (published in a “Global Sisters Report” article on June 6), women religious are uniting on the road to the way:

And rarin’ to go.

Haven’t been there before.

But we know the Way.

That there’s no “right way”

And that Way is

Where are we going again?

Haven’t been there before.

But we DO know the Way.

As you walk your own road of discernment this week, reflect upon how you may be coming upon a turn towards religious life. Your gifts and talents may be precious fuel for propelling us into the future.

What scenery is catching your eye?

What needs are you discovering along the way?

How is your discerning heart transforming on your journey?

From wherever you are in the world, join us in a moment of prayer as FSPA meets to discern the future of religious life.