Discerning, igniting a revolution of peace

The first thing I do each morning is check the news app on my phone. Before my feet even touch the floor I become conscious of the violence that has occurred while I slept — horror has erupted in our neighborhoods, wars continue to rage throughout many nations. I say yet another impassioned prayer for peace as I get up to begin my day.

Yesterday, I rose with the anticipation of the Feast of St. Francis of Assisi. Francis, known to many as a peacekeeper and the patron saint of animals, woke to his own journey of life almost 800 years ago that was not filled with roses and rainbows. He lived in the middle of warring papal and city states where the feudal system was breaking down. Chaos ruled and many found themselves destitute, starving, and unprotected from the violence around them. I imagine that if there had been 24-hour world news coverage or instant, streaming internet video in his time, his world would in many ways mirror our own. 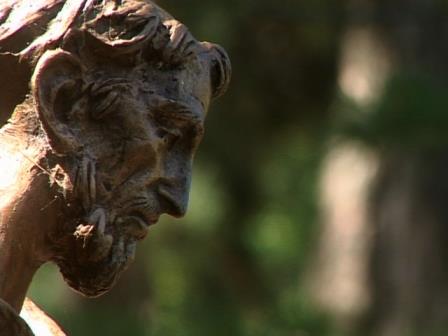 But Francis did not stand idle, watch the problems from a distance or hide from the world around him. God called him to go right into the heart of the system that was crumbling, urged him to move quickly to action. The invitation to “rebuild my church” was not some trite, easy task. It was an epic journey that would take Francis the course of his lifetime to navigate. For good or ill, he learned from success and I imagine much more from his failures. Perhaps in his early days, when he physically rebuilt churches stone by stone (as that is how he first interpreted God’s invitation), his isolation from social pressures and experience of quiet moments allowed him to discern how to be all of who he was before God. Eventually, as the story goes, Francis discovered that he needed to help people around him and started with the group he perhaps feared; the lepers.

Sister Eileen McKenzie reads a reflection of St. Francis by Brother Ruffino during an FSPA Transitus celebration in Mary of the Angels Chapel: "I remember how knowing Jesus and following in the footprints of Jesus was the one passion of his life."

Francis is a model and a light for our world today. He reminds us to reach out to help everyone in need, even those who make us feel uneasy, who we don’t understand and who we’ve previously chosen to ignore. He challenges us not to wait around hoping someone else will respond to the chaos around us. Light is even more contagious than darkness. What else could explain the thousands of silly, tug-at-your-heart animal videos on social media that so many of us tune out the troubled world to see? We are all looking for laughter and joy.

What would happen if, around the globe, we woke up to news stories filled with such love and happiness? A world in which individuals cultivate peace and positivity rather than fostering greed, hate and possessiveness?

Perhaps we could all begin our own revolution of peace.

Our collective wakeup call is here. How is your discernment beckoning you to be a light in our world today? How will you ignite a revolution of peace and joy in your corner of the world?

Where will your journey take you?