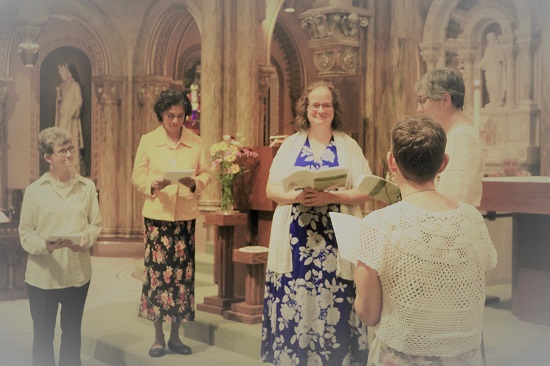 On Aug. 7, Sister Meg Earsley professed first vows with the Franciscan Sisters of Perpetual Adoration, continuing her journey as a Catholic sister.

Most recently, Sister Meg ministered at Marywood Franciscan Spirituality Center in Arbor Vitae, Wisconsin. There, Sister Meg led programming, including championing action on climate change as a Laudato Si’ Animator. She is enthusiastic about sharing the beauty and interconnectedness of creation with others. “I have done what I can as an individual, from limiting my single-use plastic usage as much as possible, to taking slow walks in nature and noticing with amazement the incredible diversity God’s creation offers,” said Meg in an interview with Global Catholic Climate Movement.

During the ceremony Sister Meg received the Franciscan Sisters of Perpetual Adoration medal. This medal was adopted by the community in 1880 and is a Maltese cross with the eight points representing the eight beatitudes. Franciscan Sister of Perpetual Adoration Marcia Baumert celebrated Sister Meg, “I remember your early reactions to FSPA and St. Rose Convent as ‘there’s so much joy here.’ As you profess your vows, may you feel that joy and know joy is one of the beautiful gifts you bring to us.” 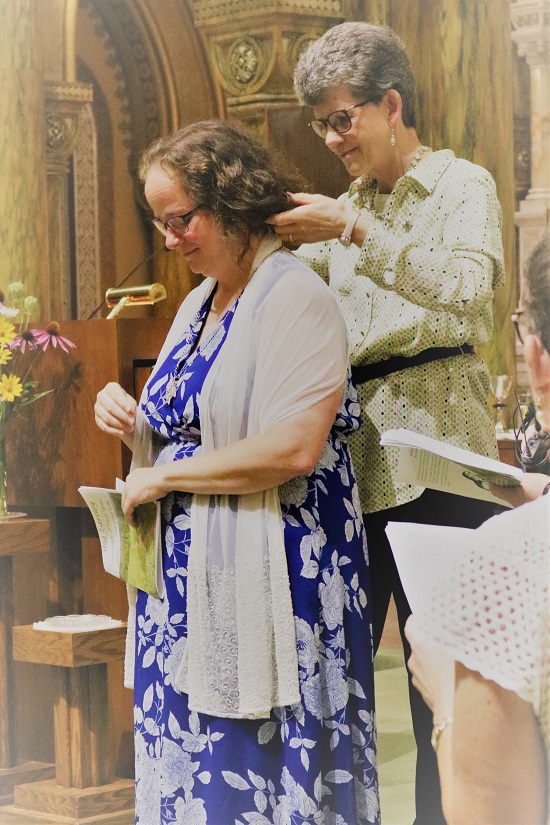 Sister Meg, who spent her youth in Oconomowoc, Wisconsin, where she attended St. Jerome Catholic Church, joined FSPA in 2018. She will now work toward professing final vows with the congregation. Reflecting on her plans, Sister Meg said, “I have some exciting things coming up after vows! First, at the end of August, I will be traveling to Washington D.C. for three months to complete mission formation with the Franciscan Mission Services. That will prepare me for travel to Bolivia soon after. There I will spend some time in language school, followed by a year of service spent with the Tertiary Sisters of St. Francis there.”

Prior to joining FSPA, Sister Meg earned a diploma in interior design from the Waukesha Area Technical College, Pewaukee, Wisconsin. She later developed a passion for information technology and served as a software director of training and support and as a director of engagement services at Pethealth Inc., a company focused on assisting animal welfare organizations with their software needs. She spent time in Fairfield, Iowa, and was a member of St. Mary Catholic Church. There, she enjoyed participating in the community as part of the music ministry and faith formation programs.

Learn more about the path to becoming a Franciscan Sister of Perpetual Adoration.