Sister Julia Walsh was featured as “Gentile of the Week” on a Jewish podcast called, Unorthodox. The podcast, a product of Tablet Magazine, an American Jewish online publication, allowed Sister Julia to tackle some difficult questions, including motherhood, discernment, and choosing a community. And in return, Sister Julia got to ask the panel of Jewish experts a question of her own about Judaism.

During the Mother’s Day-themed episode, interviewers asked Sister Julia whether the decision to not be a mother had been difficult. She openly admitted it was a struggle, even to this day, as she had initially dreamed of being a mother. However, she also explained how the decision opened the door to something greater for her: an unexpected freedom.

“It does seem like this lifestyle of not being a life and mother is actually giving me the freedom to be my best self,” said sister Julia, who is a Catholic Youth Minister, social justice activist and writer. She currently ministers on the staff of Marywood Franciscan Spirituality Center in northern Wisconsin. 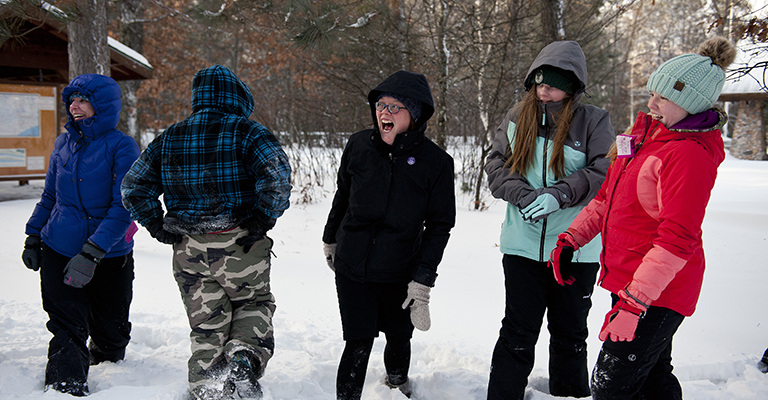 During the podcast, Sister Julia was asked when she figured out that being FSPA was her calling, a question she addressed with honesty about the vulnerability that goes into hearing the call, “Maybe I’m still trying to figure that out actually. Here I am 12 years into the life and still not sure, yet in it,” she said. “Isn’t that the way a relationship with god works? Just kind of like bowing to the mystery over and over.”

And it turns out the seed may have been planted by an unlikely source, she explained. “I didn’t know any nuns or sisters growing up and only was exposed to the life through Sister Act and (The) Sound of Music, and so that was my narrow understanding of what it was.”

“Whoopie Goldberg got you?” The interviewer asked.

“She made it look so fun, even though it wasn’t real, she was undercover,” Sister Julia responded, with a laugh.

Interviewers also asked Sister Julia about what it was like for her when she walked into a convent for the first time. “The first time I went, was actually, I think it was at the end of my freshman year of college I visited a convent and I remember having the same sort of giddiness that I did when I went to prom,” she explained. “I was just like oh my gosh, this is so exciting! And this could change my life forever! In the same sort of way that I might have about some of the guys I sat on the couch and held hands with.”

Sister Julia’s journey to community life with the Franciscan Sisters of Perpetual Adoration was influenced by a suggestion from her best friend. “He said ‘I know the community for you.’ And then he described it as, ‘They’re really respectful of tradition, and they have great devotion and great prayer life, but they’re also very modern and they’re interested in social justice, they’re academic and they’re artistic…’ And I was like, ‘Oh, yeah, that sounds like everything I want to be!’”

As her interview concluded, Sister Julia got the chance to ask the interviewees a question about Judaism. “It’s something I wonder about all the time,” said Sister Julia. “Do you guys get really sad that you can’t eat bacon?” The answer, in short, was yes.