Allies unite for mutual benefit. And that’s what YWCA La Crosse considers the Franciscan Sisters of Perpetual Adoration—outstanding allies. The organization honored the sisters at its “YWCA Is On A Mission” event in August, noting that both groups have advocated for some of the most vulnerable women and children in La Crosse, Wisconsin, for over 100 years. 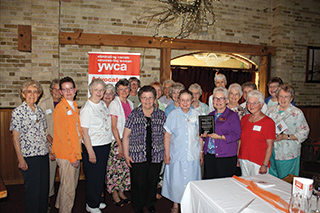 As an ally, FSPA is proud to provide ministry grant fund support to YWCA WE Shine, Teen LEAD and Ruth House programs. “The mission impact of YWCA La Crosse in one year alone—144 children in affordable YWCA childcare, 66 abused children lifted up through advocacy, 32 homeless mothers and children provided temporary housing, 66 women provided with skills to increase their chances of employment—is outstanding,” says Karen Lueck, FSPA president, who accepted the award along with fellow FSPA attending the event (pictured at left). “FSPA is proud to unite with an organization that is truly a pillar of hope to so many.”