Please welcome two new affiliates to the FSPA community: Vicki Lopez-Kaley and Gloria Ann Meyer. They both come bearing spiritual gifts from the past, present and future, and share some of those gems with us here.

The interconnectedness of all such spiritual givings emanates from the fingertips of Vicki Lopez-Kaley. She began weaving it all together early in life: “I felt drawn to the values of Francis since I was very young.” She was taught by FSPA in the religious studies program (for which she earned a bachelor’s degree) at the College of St. Teresa in Winona, Minnesota. Vickie went on to serve as a religious teacher at Cottage Grove High School in Minnesota; then as a DRE and youth minister in Eveleth and St. Cloud, (both in Minnesota) and Menomonee Falls, Wisconsin. She also wrote liturgical training curriculum geared toward teachers of elementary school students.

Presently, Vicki works in pastoral ministry and religious education at both St. John and St. Stanislaus parishes in Winona. She is a foodie volunteer, helping with food pantry programs in Winona and teaching cooking classes in La Crosse. And, Vicki “especially enjoys working with social justice ministry, caring for the elderly and helping young people find their inner call to be of service.”

About four years ago in La Crosse, when her husband Michael began working at Viterbo University and she entered the Franciscan Spirituality Center’s spiritual direction program, Vicki’s aspirations aligned with affiliation. Her director encouraged her to consider it. “It seemed like the perfect time in my life to make a connection to the Franciscans.” And, as a relatively new resident of La Crosse, Vicki says these relationships have been “valuable encouragement and community experiences ... have helped nourish and challenge my faith and revealed a new sense of God’s calling. Praying with the sisters and learning more about their broad vision for service and community life,” she says, has bolstered my faith.” 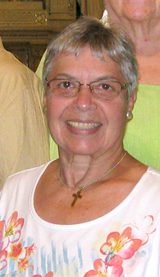 “The time spent with Sister Rosalia Bauer and the Traveling Retreads gives me a feeling of joy and peace,” says new covenant affiliate Gloria Ann Meyer.

A resident of Beloit, Wisconsin, Gloria Ann’s call to FSPA affiliation also gives meaning to her life once filled by “a real void ... that only Jesus can fill.” Now, she says, “I want to serve Jesus through service to others and by providing witness to the Gospel.” She also feels a connection to Franciscan values and perpetual adoration.

Gloria Ann has—with a bachelor’s degree in education from Northern Illinois University, DeKalb, Illinois, and a master’s degree in education from the University of Wisconsin-La Crosse—given her professional self to children. From 1962 to 1972, she worked as a summer camp counselor—in capacities that included program advising and business managing—in Wisconsin, Illinois and Michigan. She then taught physical education: as a teacher at Washington Middle School in Naperville, Illinois, from 1964 to 1967, and at Parkview High School (where she also coached gymnastics and volleyball) in Orfordville, Wisconsin, from 1964 to 1990. Gloria Ann became a dear friend’s constant caregiver, 24 hours a day, seven days a week in her own home.

And Gloria Ann has also given her spiritual self to her community. At St. Jude Parish, she has been a Marian Guild officer; steering committee, pastoral council and honor guard member; funeral luncheon server; communion minister: lector; word and communion minister and Saturday Mass coordinator. In Beloit, she also coordinates Pro-Life Wisconsin’s Spiritual Adopt-A-Baby program and volunteers as a receptionist at/serves as an advisory board member of the Senior Citizen Center.

Now, in Gloria Ann’s time as a FSPA affiliate, in reflection of the feeling of joy and peace she receives in her own heart, she wants to give “that feeling to others.”