Three of the Tertiary Sisters of St. Francis visited La Crosse this spring, to discuss long-range planning as a part of the Common Venture project. Sister Anita Beskar says it’s important to keep a Cameroonian presence here. “We have worked from the very beginning to have a mutual exchange,” she explained. “The companion relation is a mutual journey into our futures.”

The group discussed some long-range goals, and they plan to send leadership from the three U.S. congregations involved in the Common Venture to Cameroon next November.

While they were visiting St. Rose Convent, Sister Sophia Gorfer, vicar general of the TSSF from Brixen, Italy, and Sisters Xaveria Ntenmust, director of the hospital at Njinikom, and Alphonsa Kiven, provincial of Cameroon province, offered an update on happenings within their congregation. 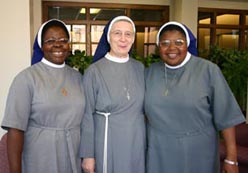 Updating the constitution
The Franciscan Tertiary Sisters have been working hard to update their guiding principles, paying special attention to the language and needs of the younger generations. They did it, in part, with the help of Sister Marlene Weisenbeck, who tapped her knowledge of canon law to guide the group in the reworking of their directives in Brixen, Italy, in mid-August of last year.

Sister Sophia says input is gathered from all of the sisters, not just leadership. “It is a lot of work, but it is necessary . . . a lot of sisters say this work on the constitution helps them feel a sense of responsibility to the whole congregation.”

The document is in the translation and review process, and feedback is expected to come from all provinces by January of 2006. After that, the directives will go to the general chapter for consideration and approval.

Sister Alphonsa says the focus is on treatment of children with congenital heart problems, and was an enormous undertaking. “We were a little bit reluctant to accept this because we said we are already having all these big departments in the hospital and struggling to manage them; we wouldn’t like to take on another project which is so heavy.”

But the obvious need for heart care outweighed any reservations, and Sister Alphonsa says that the ramifications go far beyond healing the sick. In fact, the development of an advanced medical center in Cameroon is changing societal beliefs. “We call it a modern health project. Because, you see, death to us is a mystery. If somebody suddenly dies, it creates a lot of conflicts with people in the family, within the neighborhood and so on. So if a child suddenly dies, it always creates conflict within the family. But nobody knew that a child could be suffering from a heart disease. So now this discovery has done another thing–in society. It is an eye opener, and people now believe it is not witchcraft, it is not superstition. So that is one reason we value a cardiac center a lot.”

Training of personnel began in July 2001, and the center opened in November of 2002, with a diagnosing physician who refers patients in need of further care to Milan. The sisters and officials at San Donato continue to have a vision of someday eliminating the need to refer patients to Milan. By the end of 2006, they hope to have the staff, equipment and capability to perform heart surgeries in Cameroon.

A significant shift in public attitude has accompanied the medical advancement. While Sister Alphonsa acknowledges that many people still harbor superstitions about illness and death, doctors from Milan have provided the ultimate in convincing evidence. A team of medical professionals from Milan came to Shisong with their equipment in March and operated on three children with heart problems. All three have seen improvements.

“The whole village–everybody was celebrating!” Says Sister Alphonsa, “That gave people the certainty that it is possible.”

The success of the project is testament to the hard work of the sisters, who are attempting to fill a deep need. Sister Alphonsa says it is possible because the sisters believe in addressing the needs of the poor. “We allow ourselves to be challenged by whatever comes, then we reflect on it. It needs to reflect our way of life; it needs to give service to the needy, because that is our call.”

Pharmacy in Njinikom
Besides caring for the basic health care needs of Cameroonians, the Tertiary Sisters of Cameroon are also saving patients money on medication by opening their own self-supporting pharmacy. The pharmacy, which is now in full operation, also enables the sisters to bag and send plasma to other medical centers they operate.

The idea came from David Sauer, who routinely collaborates with the Common Venture. Sauer works with Catholic hospitals in the United States to distribute used medical equipment throughout the world. He identified the need, and expressed a desire to start a small-scale pharmacy with the sisters in Shisong.

Funds were tight, Sister Xaveria says, but the need was obvious. “We started to build because the medicines are more and more expensive.” She explains that patients have to pay for their own health care, so saving them money on medication—an estimated two-thirds of the cost—would offer significant relief to the poor.

“The important thing is to give (medicine) to the patients at an affordable price,” says Sister Xaveria.

“Project Hope” shows signs of success
The Tertiary Sisters of Cameroon are working hard to address the AIDS epidemic in their country where it is spreading rapidly. Sister Xaveria says prior to education and the availability of medicines to treat the disease, patients lost hope and were giving up. “Many were dying because of despair and the stigma.” She says the sisters developed “Project Hope” a mother and child prevention program to address the problem. As a part of the effort, pregnant women were counseled, and were administered drugs during delivery as a precaution. Counseling was also put into place for mothers who are breastfeeding.

“There is a great change—the stigma is going down. Now, 100% of the mothers accept counseling,” says Sister Xaveria, who also says that young people are talking about the risk of AIDS.

She expresses appreciation for the volunteers who have donated their time to providing counseling, and she says the sisters are working to give the volunteers a stipend from time to time, to keep energy behind the project. She says the effort remains important, even as research advances. “Treatment is not the main thing. The main thing is prevention, and to let them know they can live with it.”

Information superhighway reaches Shisong
With the support of the Common Venture, the Tertiary Sisters of Cameroon are now connected to the world via the internet.

“We just couldn’t match with the communication world,” explains Sister Alphonsa. Residents in Shisong who wanted to check email had to travel for half an hour to get to the nearest internet hook-up. That became a hardship for the sisters, who found that many people expected same-day responses to emails. So they started talking about the possibility of having internet access installed at the hospital.

“I went to Sister Marlene (Weisenbeck) to talk with her and I said, ‘I have another dream—go tell the Common Venture. It is of the internet café,” Sister Alphonsa says with a laugh.

The result is no laughing matter, but a real solution to a communication need. When the Common Venture offered sponsorship, the “Franciscan Network Café” went online. “It has done a lot for the hospital,” Sister Alphonsa says, “Since October, we have internet access. People are able to take courses online, to communicate with other doctors and ask questions.” 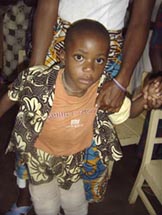 Demand is high for orthopedic programs
The Tertiary Sisters of Cameroon have also invested considerable time and energy into developing orthopedic programs to help children with congenital and physical disabilities. For six years now, they’ve hosted orthopedists from Holland twice a year. The physicians offer a whirlwind of operations for children in Njinikom who desperately need them. In just two weeks, a team of three orthopedists operates 12-hours a day on an average total of 44 patients. An on-site resident brings the total team number to four.

“By the time they come, crippled people are lining up,” says Sister Xaveria, who says word has spread about the life-changing operations these physicians are providing, and 40 to 50 children ask to be admitted every time the doctors are in town.

“When they come they are creeping on the floor, and afterward you see them standing and you would not believe it,” Sister Xaveria says.

Once a child has received an operation for their disability, they are taken to a physical therapy center in Bafut, known as SAJOCAH, the St. Joseph Children and Adult Home.

In Cameroon, crippled children are often hidden at home, and without treatment, they would have little chance of making a living. That’s why the service these physicians are offering is so vital. “You have to be critical and really handicapped because the goal is that you can go back to the city as a normal person. They are also helping them get jobs . . . shoe mending, sewing, hair dressing–if they are a woman–because they have been so crippled that they can’t do anything.”

By performing these operations, the doctors are also helping the hospital to build a big operating theater at the hospital, according to Sister Xaveria. The group of doctors from Holland are funding the construction and equipping of the facility.