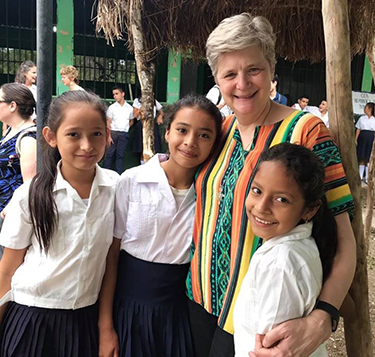 For even the most well-meaning and empathetic among us, it is impossible to truly understand what would compel someone, often at great risk to themselves and their loved ones, to flee to another country. Perhaps that is because we’ve never known need or fear or despair at such a level. But to address the issues related to immigration, understanding the root causes is key to forging solutions.

That’s where the “Reverse Caravan” comes in. The Leadership Conference of Women Religious, the Share Foundation and the People of Faith Root Causes Delegation sponsored a pilgrimage to Honduras in March. The “Reverse Caravan” allowed people of faith to immerse themselves in the culture and realities that lead to immigration and then to return home not only informed, but inspired and changed forever.

Because of the size of the delegation, they were split into three groups. Sister Katie’s group went to Santa Bárbara, Honduras. There they visited with the indigenous Lenca people who are fighting displacement as mining companies and dam projects push them out. She stayed with the families in humble housing, sleeping three to a bed. “That was the most beautiful part of my experience,” she says.

At the same time, their challenges were heart-wrenching. “There’s a lot of discrimination, and sometimes, when they speak out, they are threatened or smeared in the media. And a lot of these areas are getting militarized because much of U.S. aid is invested in a failed security policy that leads to serious human rights violations,” explains Sister Katie. “Many people told me that they don’t see U.S. aid, but they do see the soldiers.”

Although Sister Marie has led cultural immersion programs through the FSPA-sponsored Global Awareness Through Experience program in Central America, South America and Mexico, the delegation brought her to Honduras for the first time.

“I’ve seen poverty before, but I was very surprised by how small people’s homes were, with metal walls and metal roofs,” she says. In particular, in San Pedro Sula, many of the houses don’t even have doors, just a draped cloth. These families are being threatened with eviction in spite of holding a deed to the land, because land developers want the property for an apartment parking lot.

Sister Marie witnessed a similar situation in the community of Alemania, where the poor hold title to the land but have had to hire lawyers to defend their ownership. “My experience of Honduran reality right now is the country is open to the highest bidder, and that is multinational corporations,” she says.

The delegation also learned about rampant gang violence and gang control of neighborhoods, as well as the prevalence of femicide: the widespread murder of women in Honduras, totaling one every 17 hours. In addition, they learned how the cultivation of sugarcane and African palm trees consumes water at a rapid pace while also consuming land that might otherwise be used to grow crops that feed families.

The delegation coincided with the 39th anniversary of the assassination of Saint Oscar Romero, who was a voice for the poor and powerless and continues to be a source of inspiration for the people of Central America, including those in Honduras. The delegation also honored the memory of Berta Cáceres, an environmental activist from Honduras and indigenous leader who was assassinated in her home in 2016, after enduring years of death threats.

“I think that if people who don’t understand reasons for immigration were to meet the Honduran people … and to really have that personal encounter with them and to see them as another human being, a child of God, I really believe they would change,” says Sister Katie. “These wonderful people are resilient and brave, and really don’t want to leave their country. But when you’re faced with death threats and hunger and inhumane conditions, when your government is corrupt, what are your choices?”

How you can help
The Berta Cáceras Act would suspend U.S. funding to police and military operations in Honduras until the Honduran government investigates allegations of human rights violations by security forces, and seeks prosecution for violence. The bill also asks that the U.S. government vote to end future loans from multilateral development banks to security forces in Honduras. If you are concerned about these root causes of immigration, you may contact your congressional representatives and urge them to support the Berta Cáceras Act and urge your state senators to introduce similar legislation.