Pastor and parishioners honor sister during Year of Consecrated Life

by Jeff Thompson
Like a conductor at a symphony, Sister Marianna Ableidinger directs a group of children as they prepare to receive their first Communion at Saints Peter and Paul’s Catholic Church in Gilman, Wisconsin. The squirming group of boys and girls dressed in their Sunday finest might be a challenge for some, but with more than a half-century of experience in consecrated life, Sister Marianna is in her element. 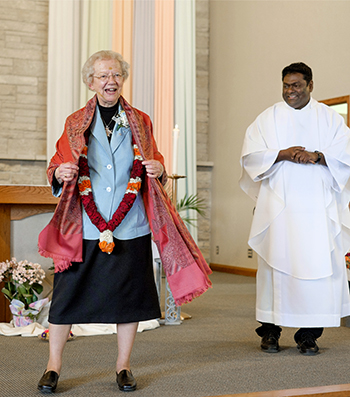 In addition to the first Communion, the April 12 Mass was also a celebration for Sister Marianna herself.  As part of the proclaimed Year of Consecrated Life, Sister Marianna was honored for her 57 years of service as a Franciscan Sister of Perpetual Adoration.
Toward the end of the service, parish priest Father Madanu Sleeva Raju, with the help of parishioners, honored Sister Marianna with a series of traditional ceremonies from his native India. A circular blessing with flowers and scented, lit oil was performed over her. A garland of red and yellow roses sent from India was placed over her in blessing and a beautiful shawl, arriving in time from India, was placed around her as part of the colorful event.

Father Sleeva praised both her dedication and humility. “She’s a wonderful lady; she is very dedicated and she never says no,” Father Sleeva said. “Her humility is her greatest strength.”

Sister Marianna serves as religious education director for the Five Saints Catholic parish cluster in north central Wisconsin, a position she has held for 11 years. Since joining the Franciscan Sisters of Perpetual Adoration in 1957 she has made many stops as both a teacher and pastoral minister. Her travels even took her to El Salvador for four years.

Reflecting on her journey, Sister Marianna recalled when she first understood her calling to the church as a teenager. “I always wondered how my parents knew I wanted to be a sister. At one point I realized that when we would get the Catholic paper, I would cut out the pictures of the sisters and put them in a scrapbook!” Her parents noticed as well and took her to visit the sisters where her calling was confirmed.

Claire Drier, eight years old, was one of the children receiving her first Communion and her appreciation for Sister Marianna is easy to notice. “She’s special and she makes me feel happy, special and safe.”

Claire’s mother Jeanie agrees. “She’s really understanding. She just has this love of what she does,” Drier said. “Claire calls her Grandma Sister.”

With nearly 40 family members, fellow Franciscan Sisters and parishioners surrounding her, Sister Marianna was also honored on May 3 at nearby St. John’s Catholic Church in Sheldon, Wisconsin. Once again, Father Sleeva and parishioners brought out the traditional Indian ceremonies and the appreciation flowed.

Fellow Franciscan Sister Dorothy Schneider and her sister, FSPA affiliate Delores Schneider, spoke of Sister Marianna’s dedication to the church. “She has great love for the church,” said Sister Dorothy. Delores added, “She has a love for helping people and she really likes the rural areas.”

Sister Marianna’s siblings Blanche Berger and Leon Ableidinger were among the family in attendance at Saint John’s. Blanche credits their father for helping Marianna find her religious calling at a young age and Leon simply says the whole family is proud of her.

Of her special events, Sister Marianna writes, “To me these celebrations were more than a celebration of
consecrated life. They were celebrations of pastor, parishioners, family and friends working together to make this a very special and memorable moment. I am overwhelmed and feel loved and appreciated.”