Story and photos by Jeff Thompson 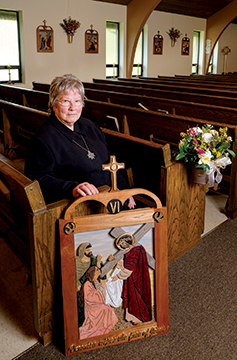 At Saints Peter and Paul Catholic Church in Gilman, Wisconsin, what’s old is new and what’s modern is history—at least when it comes to the Stations of the Cross adorning the walls. In a recent ceremony, a new set of hand-crafted wooden stations were installed to replace a modern-styled metal set parishioners found less than ideal.

Sponsors carried in the new stations one by one and they were blessed before installation on the walls of the sanctuary.

The artist behind the project is Sister Shirley Wagner who worked for seven months crafting the new stations using the woodworking technique known as intarsia. Intarsia is an ancient process whereby small pieces of differently colored wood are carefully cut, sanded and formed to create a three-dimensional mosaic-type work of art. She estimates spending nearly 100 hours on each station.

Sister Shirley is a master woodworker who has created more than 600 commissioned works since taking up the craft and focusing on it in her retirement. She had never created a complete Stations of the Cross set and jumped at the opportunity when Father Madanu Sleeva Raju of the Five Saints Catholic Cluster in northern Wisconsin commissioned her. 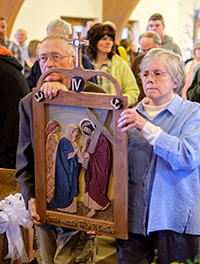 To prepare, she discovered inspiration in an unusual place. “I went on the computer and found there were coloring books of the stations.” She then went to her school and discovered a set of fifth-grade coloring books with her pattern. “It was just amazing; I looked everywhere and then I find it in a bin at the school,” she adds. Sister Shirley tried to stay faithful to the patterns, but occasionally took artistic license by simplifying the designs to work better for her needs.

Sister Shirley’s attention to detail is not lost on the members of the parish who sponsored individual stations with $300 donations. Butch Podolak, chair of the church’s finance committee, sponsored the 12th station—Jesus dies on the cross. He praises the final product. “It’s awesome to see it and stare at it. I’ve seen some of her other work, and she exceeds herself with this project.”

“These are a work of art for sure,” says Sister Marianna Ableidinger, director of religious education at the church. “The stations we had were small and metal and you couldn’t tell what they were. These are very true to the way of the cross.” 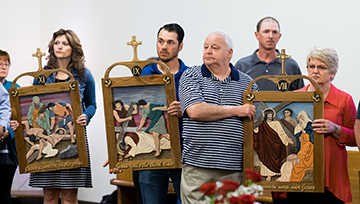 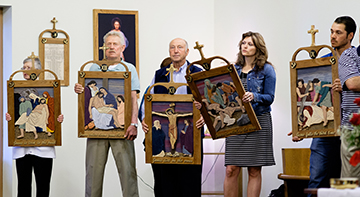 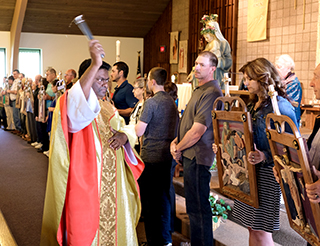 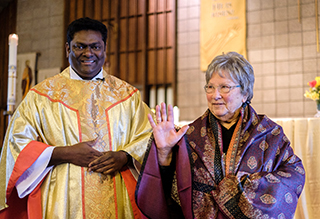