FSPA recently welcomed five new prayer partners to their ministry of perpetual adoration; three were commissioned in Mary of the Angels Chapel on April 23. 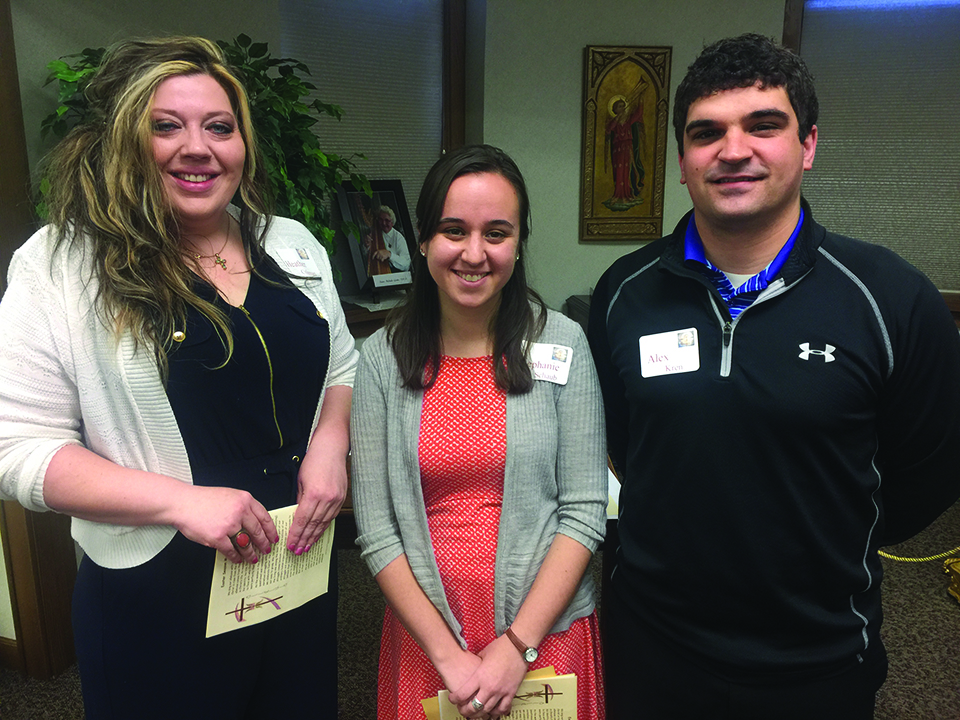 Theresa Burchell is a familiar face around St. Rose Convent. She works in the Franciscan Spirituality Center and in St. Rose food service. Theresa is studying at Western Technical College and hopes to build her educational experience toward training in psychology. She’s lived many places but hopes to return to Oregon after further studies. Her adoration hour is Monday at 9 p.m.

Heather Coleman, pictured above; left, has been praying in our chapels for some time. Sister Jean Kasparbauer encouraged her to make it official as a prayer partner. She is associated with La Crosse's Olivet Lutheran church, has one son and is a full-time student. She also works part time at Logistics Health and in home health care. Helping people gives her great joy and she hopes to qualify as a counselor. She prays with us Fridays at 4 p.m.

Alex Kren, pictured above; right, a seminarian with the La Crosse Diocese, is from Neillsville, Wisconsin, and has four brothers. After enjoying sports, school, friends and the experiences of growing up, he discovered the depth and beckoning of prayer and found his vocation. Sister Fran Browning received his request to pray in our Adoration Chapel and invited him to become a prayer partner. He is currently in the Regency Year of seminary preparation, works at Subway, helps at La Crosse Warming Center and plays golf when possible. Alex prays with us on Sundays at noon.

Mark and Peg Schneider belong to Blessed Sacrament Parish in La Crosse. They raised three children and now have nine grandchildren. Mark owned and managed the heating and air-conditioning business his father founded, now run by his sons. He graduated from Campion High School in Prairie du Chien and serves on the board for the Bishop John Paul Scholarship Fund. Peg is an active member of her parish where all nine grandchildren are members and Mass servers. Both she and Mark help at The Salvation Army, La Crosse Warming Center and with Meals on Wheels. They pray during the Wednesday 2 p.m. hour.

Stephanie Schaub, pictured above; middle, is a La Crosse native who is now teaching second grade at St. Patrick’s Parish School in Onalaska. She attended Catholic elementary schools and Aquinas before graduating from Saint Mary’s University in Winona. Stephanie speaks Spanish and volunteered for two years in Bolivia. Stephanie currently volunteers at Centro Latino and a local nursing home. Wednesday at 4 p.m. is her regular adoration hour.