FSPA recently welcomed 14 new prayer partners to their ministry of perpetual adoration; 10 attended the  commissioning ceremony in Mary of the Angels Chapel on Nov. 12. 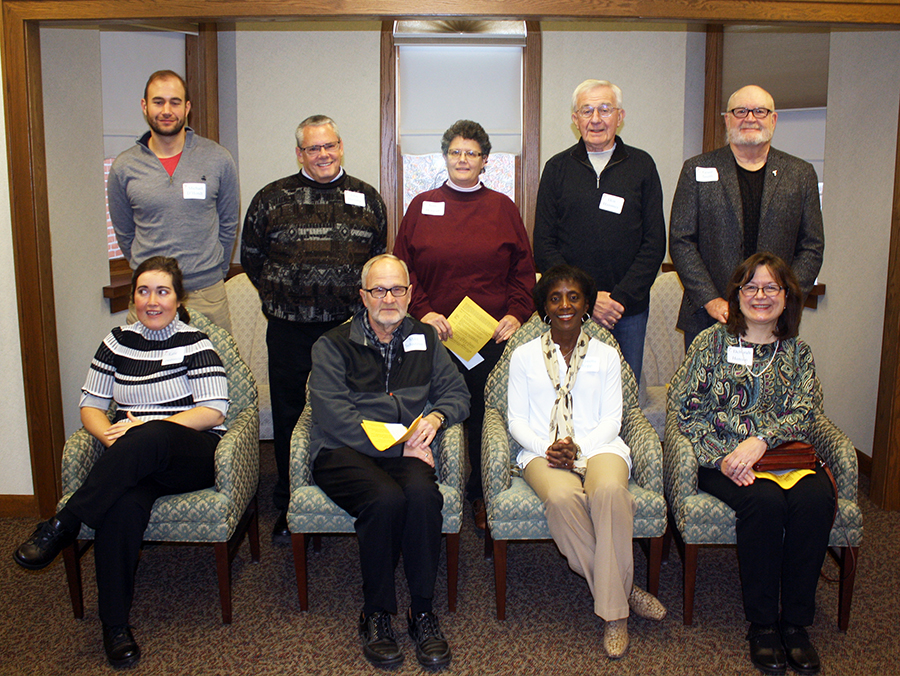 Deborah Bartel grew up on 21st and Market Streets in La Crosse. She and five of her six siblings took piano lessons from Sister Rose Cecile at St. Rose Convent. With effective management of MS, Deborah remains active in La Crosse’s Our Savior’s Lutheran Church and its choir, and also provides maintenance for the Riverside International Friendship Gardens. Deborah worked as a dental hygienist, has three children and is now retired. Deborah adores at 7 a.m. on Wednesdays.
Michael D’Hondt moved from Detroit, Michigan, and Madison, Wisconsin, to La Crosse to establish his practice of dentistry. He and his family of origin have a great interest and particular devotion to the Venerable Solanus Casey, an American-born Capuchin priest who died in 1957 and was beatified in November 2017. Michael is a cancer survivor and avid sportsman. He prays in our chapel on Mondays at 6 a.m.

Anthony Flottmeyer is a La Crosse native who attended Aquinas and Viterbo (three years) and graduated from UW-La Crosse. He is the father of three girls and a boy and a member of Blessed Sacrament Parish in La Crosse. He serves on the Disability Rights Wisconsin Board and the Independent Living Resources Board, as well as volunteering at Our Lady of Guadalupe Shrine. His aunt, Lucille Pedretti, is also a prayer partner, and Sister Karen Flottmeier his cousin. Anthony’s hour of prayer is Thursdays at 4 p.m.
Don Hammes is from La Crosse’s Holy Trinity Parish. He and his wife have three adult daughters, one of whom, Kim Lenth, is also a prayer partner. After a career in manufacturing, Don became a eucharistic minister in his parish and also takes great pride in his work at the La Crosse County Aging Unit Meal Program. He believes firmly there is no excuse for anyone to go hungry in La Crosse County. Don prays with us on Tuesdays at 9 a.m.

Deborah Hansen is a spiritual director and retreat leader at the Franciscan Spirituality Center in La Crosse. She and her husband have five children. After living in Ohio and Iowa, the family moved to La Crosse. Deborah says she has found a home in the Catholic tradition and now in the Franciscan tradition. Deborah prays in our chapel on Tuesdays at 5 p.m.
John Haverty is from Brownsville, Minnesota. He and his wife live down the road from their church, Evangelical Church of Peace served by Reverend Bill Reese who is also on staff at  Viterbo University. John worked for 12 years as executive chef at Mayo Clinic Health System-Franciscan Healthcare and now volunteers in the jail ministry of Houston County, the spiritual care department at Mayo Clinic Health System-Franciscan Healthcare and Circles of Support. He and his wife have two children, Carli and John. In support of his son, who has diabetes, John started the Thunder Run motorcycle project to raise money for the care of children with diabetes in the area. He prays on Mondays at 1 p.m.

Jean Hengstl worships at Mary, Mother of the Church in La Crosse. She was born and raised in La Crosse and returned in the last two years to spend time with family. She says prayer touches lives and provides an opportunity to make a difference. Her relatives, including Sisters Xavera Hafner, Rita Ann Walter and Maria Friedman, were part of her faith formation. Jean is active with youth groups in her neighborhood. She prays with Jean Kreutzer, her aunt and a prayer partner since 2000, on Wednesdays at 9 a.m.
Barbara Hoffman came to UW-La Crosse from Rockford, Illinois, and, after graduate school, taught math in West Salem, Wisconsin, for 38 years. She and her husband attend liturgy at St. Leo’s Parish where Barb helped with CCD classes for 15 years. The Hoffmans have three adult children and six grandchildren. Barb prays with us on Thursdays at 10 a.m.

Kimberly Lenth volunteered with Integrative Therapies, typed prayer requests with Sister Sarah Hennessey, and now has asked to become a prayer partner. She is a graduate of St. Francis School of Nursing, the mother of three adult children, has two grandchildren and volunteers with great generosity. Kimberly and her husband worship at Blessed Sacrament Parish in La Crosse. Her parents live locally and her dad is a partner in her outdoor activities. Kimberly serves as a sub at least one hour each week.

Katie Lowenstein is the daughter of Kris Lowenstein and the granddaughter of Luella Krall, both prayer partners. Luella passed away in April and Katie has prayed in her place ever since. Katie’s family attends services at St. Patrick Church in Onalaska, Wisconsin. Jay is Katie’s dad and Beth and Abbey, her sisters. She is employed at the Onalaska Goodwill, volunteers at Gundersen Health System and is an usher at the Weber Center. She enjoys spending time with her family and her grandpa, fishing, dining, watching Green Bay Packers games and volunteering at church. Katie is grateful to participate in the prayer partner ministry. She prays on Mondays at 3 p.m.

Lynnetta Kopp retires from her role as executive director of Coulee Region RSVP in December. She and her husband of 35 years have lived in La Crosse nearly all the years since 1986 and combine their religious history of Methodist (Lynnetta), Lutheran (Steve), and Catholic (son in Catholic schools). They are very active in the community. Starting in December, Lynnetta will pray on Thursdays at 10 a.m.

Mike Schnitzius is an FSPA affiliate and a Third Order Secular Franciscan. He and his wife have two adult daughters. After teaching social studies for 34 years, Mike became a generous volunteer at the Franciscan Hospitality House and St. Clare Health Mission. He attends Journey Lutheran Parish in Holmen where he is a lector and helps with altar guild visitations. Mike prays with us Thursdays at 5 p.m.

Grant Smith taught English for more than 20 years at Viterbo University. A native of Idaho, he says he has found significant compatibility between his LDS concept of atonement and the Franciscan tradition he found in the Viterbo community and its FSPA sponsors. Grant was recently widowed and has one daughter and two sons. He is proud to have recently completed his goal of hiking to the highest point of all 50 states in the country. He prays with us on Thursdays at 3 p.m.

Katie Wine was baptized in the Lutheran tradition but is open to various faiths. She is currently a gracious and helpful employee at St. Rose Convent in the dietary department. Katie ran a number of small businesses after her initial training and experience as a paralegal. For a time, she lived in California where personal training and exercise were her primary interests. She currently serves on the Franciscan Healthcare Auxiliary. She prays with us on Mondays at 5 p.m.