New affiliates: Caring for our brothers and sisters in God's world 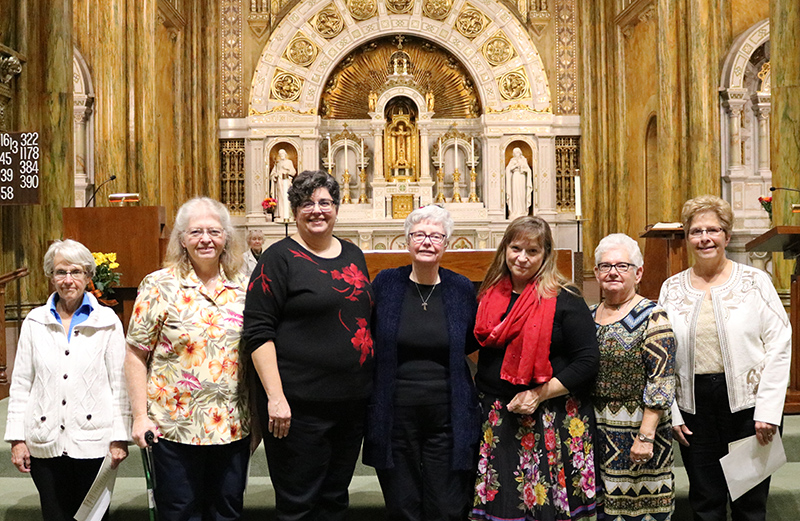 FSPA recently welcomed eight new affiliates. Here are some of the gifts — prayer, ministry and community — that they share with us.

Evelyn Clarkson
“To be more spiritual and loving with the people I encounter each and every day — especially those who are suffering physically, spiritually or emotionally,” are Evie’s goals in affiliation.  A retired licensed practical nurse who lives in Medford, Wisconsin, she serves Our Lady of the Catholic Parish as lector, eucharistic minister at Mass and to the homebound, parish council member, Holy Rosary Council of Catholic Women chair and, for more than 35 years, CCD teacher. Evie also serves the Superior Diocesan Council of Catholic Women as president. Guided in affiliation by her companion, Sister Shirley Wagner, Evie also volunteers at her local food pantry and Stepping Stones, an organization that serves victims of domestic abuse. Evie’s understanding of Franciscan living is to be committed to daily prayer, a devotion she fulfills by reading “Magnificat,” “Sisterhood of Saints,” “Mornings with Jesus” and “Near to the Heart of God.”

Jane Corrigan
“We have such beautiful gifts surrounding us; our fellow humans, nature and the universe,” says Jane, who is committed to bringing peace to all creation by stewardship, education and further challenging herself to live the Franciscan value of simplicity. Jane is retired from the health care ministry of nursing and lives in Danbury, Wisconsin. She holds close friendships with sisters and affiliates with whom she serves as a committee member at both Sacred Heart of Jesus and St. Mary’s parishes. She also ministers to the homebound as a eucharistic minister and has developed a parish social justice committee. Companioned by affiliate Marge McCardle and a member of the Troubadours For Sophia, Jane finds prayer to be an important aspect of the Franciscan tradition and practices meditation through Scripture
as a daily morning ritual.

Ann Hanson
“To be more comfortable within my faith, take part in a spiritual community, become involved in care of our local community and our environment and to learn more about Franciscan history” are inspirations to Ann in affiliation. A resident of Sparta, Wisconsin, she attends Mass at St. Patrick’s Parish and has participated in silent retreats at Villa St. Joseph in La Crosse, Wisconsin. Ann, whose companion is affiliate Rosalie Hooper Thomas, is committed to attending FSPA affiliation events and fulfilling committee involvement that includes participating in the 2018 Mission Assembly declaration group Interspirituality. The FSPA provocative movements speak deeply to Ann, a physical therapist, who teaches free community education classes and serves as secretary for P.E.O., a philanthropic organization missioned to support women’s education. Weekly spiritual practices of meditation, spiritual readings and nature study are important in her prayer life.

Brian Schilke
Brian first became aware of FSPA when sisters served as his teachers at St. Joseph Catholic School and Premontre High School in Spokane, Washington, where he lives today. A Secular Franciscan in the St. Francis Fraternity in Spokane, Brian and his local faith community provide outreach to the homeless alongside many other social justice ministries. He is very passionate about his youth ministry outreach with the St. Anthony Youth Group, participates in his parish’s Knights of Columbus group and volunteers weekly for Mass and special prayer services. His companion in affiliation is Sister Kathy Roberg, who says, “Brian genuinely believes in and practices the Franciscan way of life.” 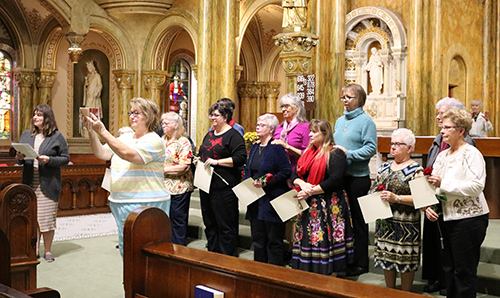 New affiliates receive the support of their sister and affiliate companions.

Jane Schiszik
“The FSPA community radiates a certain light, joy and peace, and I find the mission of the affiliates to be powerful and relatable,” shares Jane, a resident of Medford, Wisconsin, who is led in affiliation by Sister Shirley Wagner. Retired from the ministry of nursing, Jane is involved with her parish, Seven Sisters Apostolate. Twice a year, she participates in koinonia retreats (fellowship of Christians who share common religious devotion and spirituality), is a member of the Council of Catholic Women and the Holy Rosary Parish council, participates in the parish choir, distributes Communion to the homebound, coordinates a prayer chain grief ministry and more. She describes prayer as a means to “feed my spirit as I contemplate being in Communion with God and the church.” Daily, she sets aside an hour to pray the rosary, often attends Mass each week, prays the Liturgy of the Hours and reads reflections and prayers from usccb.org.

Renee Slater-Bleuer
The life of St. Francis and the value of simplicity, says Renee, bring her admiration and joy. A registered nurse and resident of Rock Island, Illinois, Renee has been involved with the companion community SONbeams for years and is active in their affiliated parish, Sacred Heart Catholic Church. She also participates in adoration at Sacred Heart and volunteers in their homelessness initiatives. Renee volunteers at Birthright and the Women’s Choice Center supporting pro-life outreach. Committed to 30 minutes of daily meditation through guided imagery, Renee also routinely reads Scripture, recites the rosary, prays the Liturgy of the Hours, participates in a bible study group and attends weekly and often daily Mass. Renee has family ties to FSPA: Sisters Alverna, Reginalda and Reginatta Mattes were her great aunts, and her companion, Margaret Bleuer, is her sister-in-law.

Therese Sersch
“The FSPA and affiliates I know inspire me to live a deeper Franciscan life,” says Terri, who pursued religious life but married after postulancy. Terri completed the Franciscan Spirituality Center Spiritual Direction Preparation Program in La Crosse in 2007 and learned of affiliation at St. Anthony Spirituality Center in Marathon City, Wisconsin. Now retired from a career in social services, Terri serves as a spiritual director and grief support group facilitator as well as a member of St. Anthony’s board of directors. She also serves the Aging and Disability Center, Habitat for Humanity, South Wood County Deanery Social Justice Committee and the Diocesan Social Ministry Advisory Committee. A resident of Wisconsin Rapids, Wisconsin, whose companion is Sister Roselyn Heil, she is committed to continuing relationship-building with those at various affiliation events as well as with her companion community, Earth Whisperers. Terri prays through daily readings of Scripture and other spiritual writings, centering practices and with her parish prayer groups.

RaeAnn Thomas
RaeAnn first connected to FSPA in college when she was employed at Villa St. Joseph in La Crosse, Wisconsin. Looking back, she feels it was then that she first became influenced by FSPA philosophy and way of being. In 2017, she completed the Franciscan Spirituality Center Spiritual Direction Preparation Program, an experience she says was like “coming home,” and is now committed to supporting FSC as a speaker and guest to further their mission and outreach. A resident of Marshfield, Wisconsin, RaeAnn is a director of employee assistance services and an advocate for the marginalized, including those served by the organization For One Child of India. Guided in affiliation by Sister Sarah Hennessey, RaeAnn considers both regular spiritual direction sessions and weekly Mass important to her prayer life. “Noticing the beauty and abundance around me,” she says, “is a prayer of thanksgiving every day.”