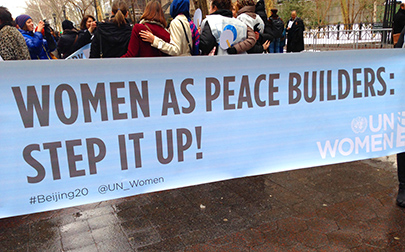 In 1995, a global conference was held in Beijing to create an international platform for women’s rights. The first international conference was held in 1975 in Mexico City where it was decided that a global conference would be held every five years. Beijing was the fifth international gathering and created one of the most progressive platforms for women’s rights in the history of the United Nations. The platform was so progressive that advocates feared if they held another international gathering they would lose the amazing ground they had gained. This year’s Commission on the Status of Women was a chance for countries to report how far they had come in implementing the goals from Beijing.

The reports were encouraging. Solid ground has been gained in many places around the world for women to participate in politics, obtain education, access health services and participate in the economy. At the same time, a consistent theme surfaced. Despite the gains, the level of sexual and physical violence against women has increased. Many countries attributed this to the fact that the policy changes had not yet altered the cultural assumptions that leave women vulnerable.

8th Day was proud to be at the U.N. with many partners from other religious communities and from around the world that are committed to ensure women and girls are granted the rights inherent to being human. It is clear each year that women are vital forces for ensuring the rights of children, vibrant community and family life, and are also strengthening political and economic sectors. Studies show improving the lives of women improves the lives of everyone. 8th Day was proud to represent the FSPA community in the vital work of supporting women and children at home and abroad.

Franciscan Hospitality House
With the outpouring of support that came and helped sustain the new La Crosse Warming Center and its guests beyond capacity this winter, committee members of the Homelessness Initiative found themselves digging deeper into the Christian belief that the presence of God is in everyone. What they discovered was a mission: to provide a safe daytime environment for adults experiencing homelessness; to affirm the Christ-like dignity in every individual through compassionate presence, listening and hospitality; and, with the engagement of the greater community, to empower people to rebuild their lives.

Through such motivation the group envisioned a daytime respite—a drop-in center for the population of homeless adults in La Crosse. They set goals of providing guests with access to social services, personal comforts including hair and foot care; shower and laundry facilities; space for socializing; and opportunities to engage in amenities upkeep. “We want to follow Jesus by addressing immediate needs of the poor,” says Homeless Initiative committee member Sister Karen Neuser. Above all, “We want to offer help to those who are able to stabilize their lives in order to get off the streets.”

This mission and its visions are set to come to fruition with a new facility, the Franciscan Hospitality House, opening its doors in downtown La Crosse in July 2015. The space will be shared with Catholic Charities, the agency footing the program’s management and staffing. Great River Vineyard Church is also housed in the facility.

“We are God’s hands, feet, heart and presence here on Earth,”says Sister Karen of the ecumenical outreach hoped to impart to center guests both a break from the elements and the motivation to transcend them. Within the FSPA family—sisters, affiliates, friends and donors—the call to ministry at the center involves the volunteerism of time to impart welcome, “to engage guests,” she says.

“Together we make a difference!”