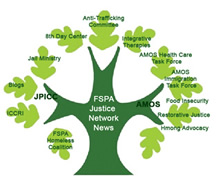 Justice Network News highlights FSPA justice activity and offers readers a broad view of the work sisters and affiliates are doing together.

The Task Force to Eradicate Modern Slavery originated during a table discussion at the 2013 General Assembly. Now, as an Action for Mission group, it has expanded into a task force consisting of professionals and other interested persons from La Crosse, Wis., and the surrounding region. Chaired by Sister Marlene Weisenbeck, the task force continues to evolve both in its self-education and community outreach.

Because the response to the task force has been immense in both membership participation and in the need to address many aspects of trafficking, it has created the following sub-committees: advocacy and victim services; community mobilization; training; data collection; public awareness and media; and Safe Harbor legislation. Each subcommittee is presently in the process of either implementing a specific action or gathering resources for formulating a future action.

The training subcommittee will sponsor a one day training conference on June 6, 2014, for an audience that includes police officers, attorneys, judges, emergency room nurses, first responders and social workers. The presenter, Frank Massolini, will focus on increasing the awareness and the first response skills of the participants. Mr. Massolini is the director of The Salvation Army’s PROMISE Program which is noted for human trafficking education. He will be joined by Al Krok, a retired detective from the Chicago, Ill., police force with 26 years of investigating child sexual exploitation cases.

Meanwhile, the data collection subcommittee is creating a system on how to collect data from various sources. This database will be developed in order to illustrate the incidences of human trafficking in the La Crosse area. This information will be useful to the task force in determining the future focus for human trafficking awareness and education.

Other subcommittees are working on such projects as educational tool kits, the potential for a billboard campaign and legislation education and support. Because of the scope of the human trafficking issue, creative ideas continue to generate from the subcommittees. A strategic plan for 2014

has become a paramount effort. The energy and commitment of task force members continues to grow in relationship to our expanding awareness of the reality of the trafficking that is happening now in our La Crosse area.