Early in January, I received an invitation to represent women religious at The United Nations, Religious Pluralism and Tolerance: The Bahrain Model conference in March. Why the Bahrain Model, I asked myself, and what is it? At the conference the Undersecretary for International Affairs, Shaikh Abdulla al Khalifa, said on behalf of the Bahrainian king, “I want members of the national media to know that I will never rule my people with guns and tanks. I am the father of a nation and, like any father, I want my followers to be full of hope.” 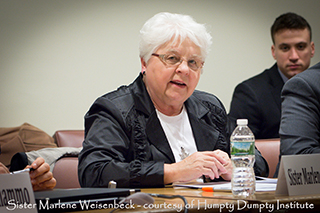 Bahrain has a fascinating history of great civilizations that have developed a culture of peaceful co-existence and religious tolerance among a multitude of sects. Their community includes Muslims, Christians, Hindus, Bahá’ís, Buddhists, Sikhs and others. Peaceful, amicable co-existence and tolerance among the followers of all religions, cultures and sects constitute the cornerstone of Bahrain’s way of life and commitment to its citizens, residents and communities. It is in a unique position to call the world to a parallel existence in a time of growing hatred and violence.

The Humpty Dumpty Institute co-sponsored and hosted the event with the Kingdom of Bahrain. Bahrain’s strong tradition of religious liberty and unique position in the Arabian Gulf prompted its desire to reach out to important religious leaders across the United States to speak about their experience for successful dialogue with other faith traditions. About two dozen such leaders were invited to convey the importance of religious pluralism and how their traditions promote a culture of peaceful co-existence and religious tolerance. Present were rabbis, U.S. congressional members and ambassadors, representatives of the Vatican, administrators from U.S. universities, the Community of Sant’Egidio, The Salvation Army, the Yazidi community, the Nineveh Council of America and others from various federations and embassies.

I was proud to speak on behalf of women religious. Framing a context from my own tradition as a Franciscan Sister I noted that in the 13th century, St. Francis refused to crusade on behalf of the hierarchy and instead followed the impulse to visit the Sultan Malik al-Kamil of Egypt, daring to cross enemy lines. Francis, who opposed warfare, chose this alternative path to peace by listening intently to al-Kamil’s words. He came away with revolutionary convictions that called for Christians to live harmoniously with Muslims. 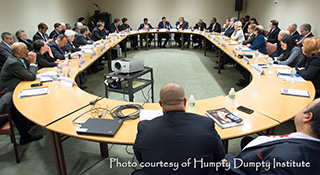 I then referenced religious life as an historical development within the grace-filled, evolutionary process of creation—a mode of human response to the Creator’s abiding presence and ongoing creation of the universe. Women religious commit to a radical following of the impulse of God
wherever they discover it.

With this in mind, I offered a glimpse of how women religious today are following the impulse of God in ministries that uphold religious pluralism and tolerance. So it was that I could reference the Monastic Interreligious Dialogues; the anti-human trafficking work of women religious in well over 80 countries of the world; the Sisters of Our Lady of Sion who build bridges of understanding in 22 countries among Christians, Jews, Muslims and all faith traditions; and the Sisters of the Good Shepherd in Thailand who run the Fountain of Life Children’s Centre founded by a Catholic sister and a Buddhist nun (serving over 100 children daily). I recalled the 2009 peace conference in La Crosse, Wisconsin, sponsored by the Franciscan Common Venture: four Franciscan Third Order communities sharing a dedicated mission to bring about systemic change.

These few examples give abundant witness to the work of women religious for all people. We do this because Scripture requires it of us. In Nostra Aetate, the Second Vatican Council affirmed that our Catholic Church does not reject anything holy and true in other religions but “regards with sincere reverence those ways of conduct and life, those precepts and teachings that ... often reflect a ray of the light of Truth that enlightens all people.”

The works of women religious are truly portraits of love and right relationships that are inclusive of all faiths and give witness to religious tolerance.