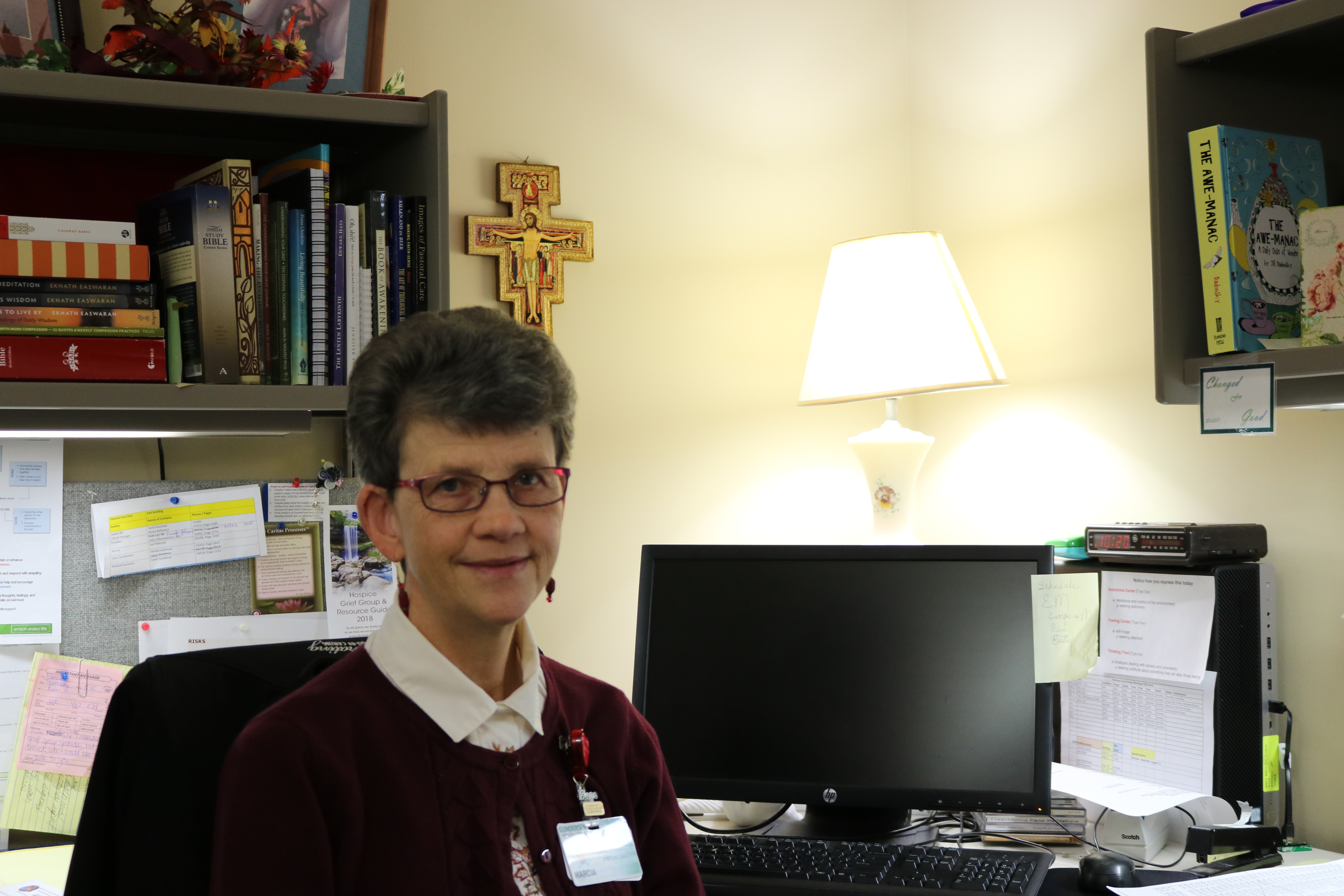 Working as a staff chaplain and coordinator of Catholic ministries at Gundersen Health System in La Crosse, Wisconsin, Sister Marcia Baumert eases the suffering of many patients and their families. From providing spiritual care to terminally ill patients to simply being with them in their time of need, Sister Marcia embodies the selfless service that permeates FSPA’s strong tradition in the health-care ministry.

While pastoral care may sound like a major challenge to most, Sister Marcia is grateful to serve in the ministry of chaplaincy. “I have the privilege of being with someone when their life is being drastically changed by a disease, process, death or accident—when life is never going to be the same for them.” In these moments of pain and suffering between both patient and family, Sister Marcia often serves as a sacred keeper of their stories. Like many chaplains before her, she is steadfast in her responsibility; she strives “to help people hold the difficulties and try to walk through and make sense of situations that are so drastic.”

Prior to her ministry of chaplaincy, Sister Marcia served for nine years as a home economics teacher at a Catholic high school, but growing inside her was a desire for spiritual fulfillment and a career better suited to her abilities. Bubbling inside her was a call to explore her growing inclination that there was more to life than her role as teacher. Vaguely aware she had not yet found her true purpose, she turned to her high school art teacher, Franciscan Sister of Perpetual Adoration Karen Kapell, for guidance. After visiting Sister Karen in La Crosse, Wisconsin, she felt “a real at home-ness and a nudge” to apply to join FSPA.

Sister Marcia joined FSPA in 1988 and was immediately drawn to spiritual direction and counseling—the ministry she would adopt in her new life as a Catholic sister. Just as she felt a connection after her visit with FSPA, Sister Marcia was drawn toward spiritual ministry after visiting a friend—a chaplain—at a hospital in Iowa. “I just felt a real connection. That was where I needed to be.”
As a former teacher Sister Marcia knows the value of education in enacting real change, a conviction that she continues to foster through her contributions to Gundersen’s clinical pastoral education training program. In addition to preparing students seeking to become chaplains, the training model incorporates direct patient care. Her department also developed a series of presentations given by representatives from different racial and cultural communities that include LGBTQ, Native American, Hmong, Latin American and Amish. While an absence of religious beliefs can lead to a lack of appreciation for spiritual care, she believes that “everyone has something that gives their life hope and meaning”.

Sister Marcia knows from her own experience that spiritual growth occurs at different rates and in various ways for individuals. She finds that her life and ministry is enriched by being a member of FSPA. “Being an FSPA has given me a strong and positive community base grounded in prayer, relationship, support and perspectives.”